“It has long been my belief that in times of great stress, such as a four day vacation, the thin veneer of family wears off almost at once, and we are revealed in our true personalities”

One of the drawbacks resulting from a gathering of almost 200,000 geeks is the overindulgence of nearly every internet hub in San Diego.

This yields non-existent web connectivity at hotels with a low broadband capacity, and thus my intention to detail each day of the world’s largest pop culture convention was rendered moot by the limited technology available at an otherwise tech-heavy wonderland. If this had been E3 instead of Comic-Con International that would have been the very definition of irony.

Suffice to say that my days of attending the whole SDCC from start to finish are probably numbered. If, in fact, I ever do attend it again, it will definitely not be for more than one or two days –Sunday among them.

Because given the time, money and resources at my disposal, I tend to buy things like this 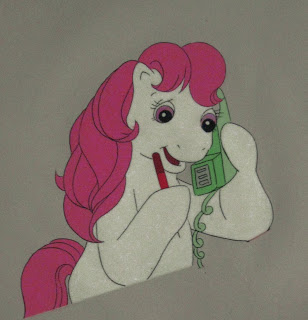 Actually, this My Little Pony original animation cel is the fifth coolest thing I bought at Comicon 2011.

What the bloody hell is a horse doing on a green, analog phone, anyway?

I almost walked away with some hilarious Masters of the Universe cels featuring adjustable eyes and mouths that seemed to hover over the faces of characters ranging from Teela to Prince Adam. This customize-able oasis of literally tens of thousands of original cels (many with backgrounds) spawned curious new voices in my head merely by adjusting their facial position –to the amusement and befuddlement of passersby, who overheard me performing those voices aloud for my friend Melody. Those cels weren’t nearly as cheap, though, and my joke purchase budget has a fairly low ceiling.

My fourth coolest SDCC acquisition was purchased at the very same table. 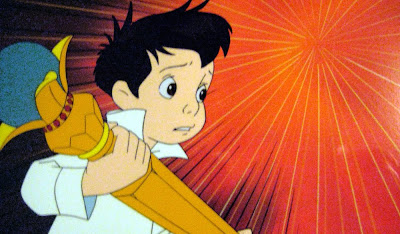 I scored this beautiful Little Nemo: Adventures in Slumberland original animation cel (with hand-painted background) for $40.

For those not in the know, Jean “Moebius” Giraud was the concept designer for this superb adaptation of Winsor McCay’s classic comic strip, and Hiroyuki Aoyama (whose credits include Akira, and half a dozen Studio Ghibli productions) was the key animator. The only reason this didn’t have another zero tacked onto the price is that original director Hayao Miyazaki quit after assembling the creative team, which included Ray Bradbury and Yutaka Fujioka. The film was almost never released, recouping only 4% of its $35 million budget.

Since it wasn’t a Studio Ghibli production, it was never picked up by Disney, and it stands as an odd curio in the tradition of another brilliant but failed animation classic, The Thief and the Cobbler.

Cool purchase number three was a hardcover, slipcased version of Neal Adams’ Monsters that Neal autographed and in which he sketched me an awesome Man-Bat bust. 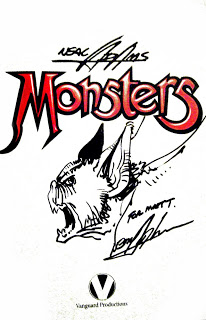 The significance of this is that the Frankenstein, the Wolfman and Dracula (reprinted and expanded within) was one of the first comics I ever read. It was originally released as book and record set, formatted for 12″ x 12″ by Power Records. The LP was a full production soundplay that signaled each page turn with a loud and clear “bing!” I listened to that record hundreds of times, like all little kids do with their favorite records, and I distinctly remember asking for it for my birthday, and listening to it two weeks later on Halloween with my best friend Tom Morley. The voice actors in the audio production were great and the sound effects even better. I didn’t discover until years later who Neal Adams was. I still have that record, too.

The second most spectacular item I took home from SDCC is this incredible final splash page of Dick Grayson as Batman from Jock’s recent collaboration with writer Scott Snyder on Detective Comics #878. 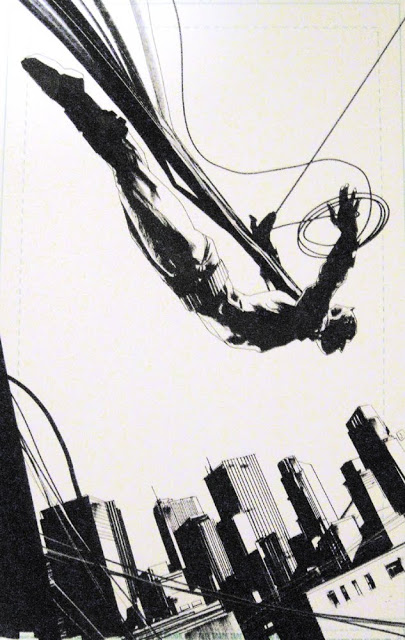 I’ve probably made it pretty clear over the years that my favorite comic book character of all time is Dick Grayson. I loved him as Robin then Nightwing in Marv Wolfman’s Teen Titans, and I loved him as Batman in Grant Morrison’s Batman and Robin. In Scott and Jock’s year-long run in Detective Comics, we may have seen the greatest Dick Grayson story of them all.

I wish this team (and this character) would continue with the title indefinitely, and knowing that they won’t it was a no-brainer to drop $750 on this final splash page in their history together. Jock has always been a dynamic artist; his Losers helped greenlight a film, and his covers on Scalped were iconic in a wholly original way, but his Batman is the best thing I’ve seen yet from him. His art fit the tone of the book like no other artist since Neal Adams’ run with Denny O’Neill. I’m sad to see this end, I’m less than thrilled with some of the changes I heard about at the 52 panel, and I’m excited to see Snyder’s future work. I haven’t read American Vampire yet, but I’ll sure be reading it soon.

What was the greatest thing I brought back with me from SDCC?

I attended more panels this year than any year previous, like The Golden Age of Fanzines, and Tribute to Gene Colan. I got caught up in some great fanversations with a father and son from Texas and a San Diegan dressed like the Joker. I had a blast just walking the convention room floor with Rufus Dayglow (who had never before attended), and goofing on He-Man with my pal Melody.

I had a blast reminiscing about past cons with Ted McKeever, Mike Mignola and my comic art vending pals Albert, Anthony, Mark, Mitch, and Stephen. I got to hang out and eat dinner with Wizards of the Coast honcho Jon Schindehette, and talk about D&D, Dennis Miller (back when he wasn’t a stuffed shirt), and freelancing for The Onion. I bought a cool Miskatonic University hoodie because it was freezing cold inside the convention center. I talked shop with some Disney folks and bumped into Grant and Kristan Morrison on the way out of the Hilton after the Eisner Awards.

I struck a few deals for future projects at the Gentle Giant party for Lucasfilm, and saw a kooky fashion show, to boot. But best of all, I got to spend five days out of Los Angeles with my girlfriend, who was really just there to work, but didn’t let that deter her from having a little fun with me.

But if that answer doesn’t function as number one on my list of the best things I got at Comic-Con, here’s Danni Shinya Luo’s 2012 Calendar. 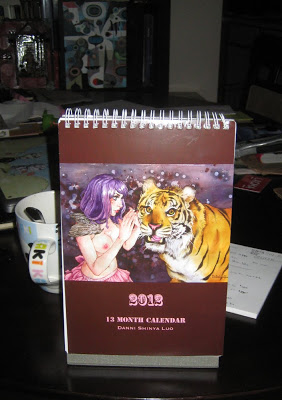