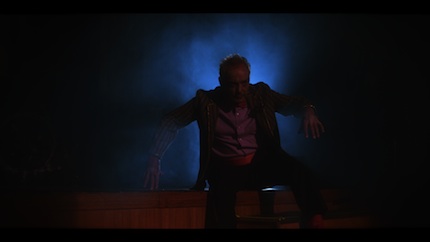 Down a seedy city street, a young woman is obsessed with what appears to be a long abandoned theatre. One night, she sees the front door slightly ajar and impulsively decides to sneak inside. But there in the vast, eerie auditorium, a show unlike any other unfolds before her eyes. Its host is an odd marionette- like man who will introduce her to six tales of the bizarre: A couple traveling in a remote part of the French Pyrenees crosses paths with a lustful witch; A paranoid lover faces the wrath of a partner who has been pushed to her limit; The Freudian dreams of an unfaithful husband blur the lines between fantasy and reality; The horrors of the real world are interpreted through the mind of a child; A woman addicted to other people’s memories gets her fix through the fluid of her victims’ eyeballs; And a perverse obsession with sweets turns sour for a couple in too deep. But as the stories unfold, something strange is happening to the woman. Something irreversible and horrific. Something that awaits its next audience in THE THEATRE BIZARRE.
“The idea for THE THEATRE BIZARRE was hatched when I was editing a DVD featurette for the 1990 art-house portmanteau ARIA, directed by Jean Luc Godard, Robert Altman, Nicolas Roeg, Ken Russell and others,” explains producer and Severin Films CEO David Gregory. “Horror anthologies have a rich history dating back to the silent era, and include classics like DEAD OF NIGHT, BLACK SABBATH, SPIRITS OF THE DEAD, THE HOUSE THAT DRIPPED BLOOD, CREEPSHOW and more. I felt that the notion of giving filmmakers a general concept, the same budget and complete creative control would lend itself perfectly to a modern horror film. In my opinion, there is no other genre where unleashing the unrestrained creative ideas of filmmakers could redeem such an outlandish array of stories and images.”
The project’s seven chosen filmmakers – Richard Stanley, Buddy Giovinazzo, Tom Savini, Douglas Buck, Karim Hussain, David Gregory and Jeremy Kasten – had all made at least one modestly budgeted and internationally acclaimed movie in the horror field, and comprise what Fangoria calls “horror’s most adventurous minds.” But the true test would come with the financial and creative logistics of bringing together six directors from around the world to create a cost-effective and effects-laden omnibus of terror. “There was no doubt that this was a good vehicle for Severin Films as a production company, but how would we get such an insane project financed?” Gregory says. “Sending filmmakers money and telling them to come back with a film without any restrictions would never have flown at the average film finance corporation. Luckily my old friend Daryl Tucker was up for the challenge of executive producing, and after Fabrice Lambot of Paris-based Metaluna Productions came aboard we were off and running.”
“We approached some of the most talented directors in the horror genre and told
them, ‘Here’s your budget and this very broad idea that your film will be playing in a Grand Guignol-esque theatre. Come back with your movie.’” explains executive producer Daryl J. Tucker. “And while the filmmakers had to take a step back in terms of budgetary levels, I strongly believe it forced them to rediscover the passion and creativity they had when they started as filmmakers, making their earliest and often finest works. No other creative restrictions existed, except that they were required to be at the very top of their game as six of modern horror’s most distinctive auteurs.”

For Richard Stanley, ‘Mother of Toads’ marks his return to the director’s chair for the first time in 18 years. The South African born filmmaker, whose visionary work includes the cyber-punk cult classic HARDWARE, traveled to the French Pyrenees to shoot his evocative tale of young travelers and an ancient evil. Inspired by the stories of Clark Ashton Smith and H.P. Lovecraft, ‘Toads’ also marks the return of ‘80s horror queen Catriona MacColl – best known for her roles in Lucio Fulci’s CITY OF THE LIVING DEAD, HOUSE BY THE CEMETERY and THE BEYOND – as the witch who holds the erotic key to a diabolical curse. Additionally, the film features a spellbinding score by British composer Simon Boswell, whose award-winning scores also include Dario Argento’s PHENOMENA, Alejandro Jodorowsky’s SANTA SANGRE, Danny Boyle’s SHALLOW GRAVE, and Stanley’s HARDWARE and DUST DEVIL. “Horror fans have been waiting nearly two decades for Richard to return to the genre,” says producer Fabrice Lambot. “It was an incredible experience to watch him weave his tale in the mountains of Southwest France, where a weird aura of sorcery infused every frame.”