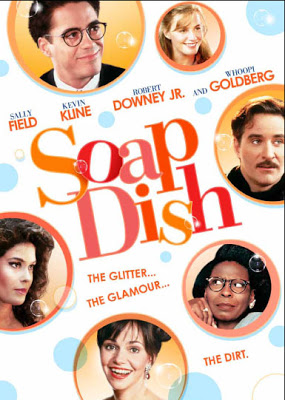 A tremendously entertaining, yet largely forgotten comedy, I hope that this anniversary edition brings it the audience that it deserves.

With a fantastic ensemble cast, my only complaint with this release is the lack of participation of the cast in a retrospective featurette or commentary.

ROBERT DOWNEY JR., SALLY FIELD AND KEVIN KLINE STAR IN THE HILARIOUSLY ZANY COMEDY CELEBRATING ITS
20TH ANNIVERSARY
soapdish
Featuring an All-Star Cast, the Uproarious Film will be Available on DVD October 4, 2011, Including a Behind-the-Scenes Featurette
HOLLYWOOD, CALIF. – The off-screen craziness rivals the on-screen drama in the sidesplitting comedy SOAPDISH, celebrating its 20th anniversary on DVD October 4, 2011.  Boasting an extraordinary cast of stars including Robert Downey Jr., Sally Field, Kevin Kline, Whoopi Goldberg, Elisabeth Shue, Teri Hatcher, Garry Marshall, Cathy Moriarty and Kathy Najimy, the hilarious comedy follows the outrageous high jinks of the cast and crew of America’s hottest soap opera, “The Sun Also Sets”.  When an ambitious actress connives with the soap’s producer to scuttle the career of the show’s beloved star, nothing works as they planned and there’s enough dirty laundry to keep everyone in hot water.  This comedy gem continues to be a fan favorite and the DVD includes a behind-the-scenes featurette and the original theatrical trailer.
SOAPDISH DVD:

The SOAPDISH DVD is presented in widescreen enhanced for 16:9 televisions with Dolby Digital English 5.1 Surround, English 2.0 Surround and French Stereo and English subtitles.  The disc includes a behind-the-scenes featurette and the original theatrical trailer.