Steve Niles jumpstarted the second act of his career and put IDW on the map with the original 30 Days of Night miniseries several years ago.

After dozens of comics, two feature films, two web series and a handful of novels, 30 Days of Night is back as a monthly with Steve at the helm. 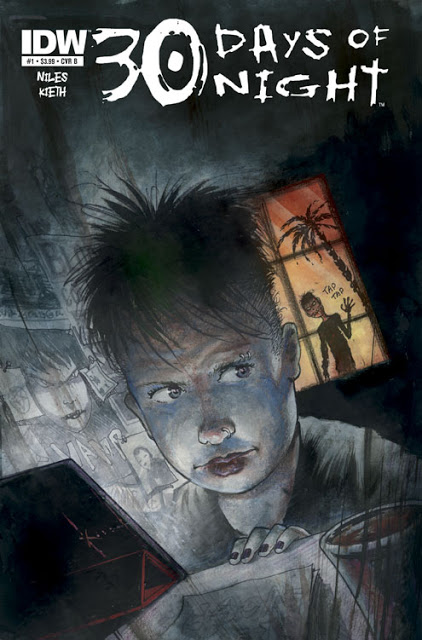 IDW Publishing today announced an all-new, ongoing 30 DAYS OF NIGHT comic book series, starting in October. Original co-creator Steve Niles returns to his first creation with this latest chapter in the 30 DAYS OF NIGHT series, joined by 30 Days of Night: Night, Again artist and The Maxx creator Sam Kieth. Niles and Kieth depict an epic story that shifts from Barrow, Alaska, to the city of angels, Los Angeles.
“I’ve been wanting to get back into the 30 Days of Night universe and shake things up for awhile now” said creator Niles. “I’ve just been waiting for the right moment, and the right artist. I have the right artist in Sam Kieth and the time is now.”
This terrifying new tale begins when a letter from Barrow, Alaska, carries a cryptic warning to a young, curious woman, leading her down a rabbit hole and face-to-face with her desires… and likely her demise. Elsewhere in Los Angeles, a vampire resurrection ignites, which could threaten the very way of life of all mankind.
“After several years away, Steve has returned to the 30 Days of Night world with a renewed vigor,” said editor Denton J. Tipton. “He has a great vision for the long game with surprises that even Steve didn’t see coming. And having Sam bring his mad genius to the project is like manna from heaven. Or, more appropriately, manna from hell.”
This new, ongoing series features a fresh cast of characters being introduced to the world of 30 DAYS OF NIGHT for the first time.  Fans are encouraged to ask their retailers about the rare Fiona Staples cover and vampire plush dolls.
“Honestly, I have nightmares because of this book,” added Tipton. “Steve and Sam are seriously deranged. I’ve read things that would make Freud blush. I’ve seen things that would make Chuck Norris vomit. Horror fans are going to love it.”
30 DAYS OF NIGHT #1 ($3.99, 32 pages, full color) will be available in stores in October 2011.