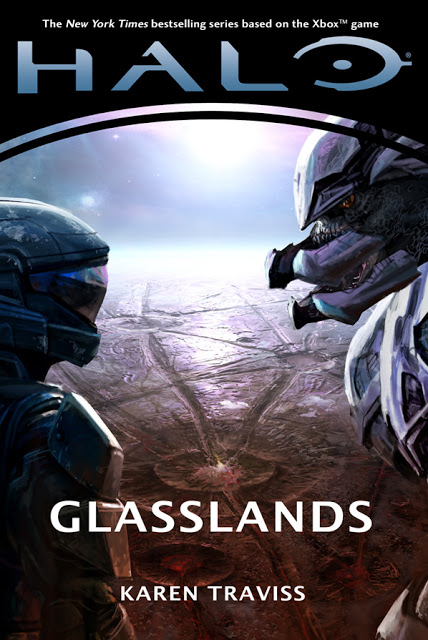 Tor Books, an imprint of Tom Doherty Associates, LLC-the largest publisher of science fiction in the world-is excited to reveal the title and cover of the first novel in an all-new trilogy by Karen Traviss that will explore the Halo Universe in the wake of the final events of Halo 3.  Halo novels published by Tor have sold over a million combined copies to date, and the entire Halo catalogue is now available in mass market paperback from Tor.  Along Karen’s debut Halo novel, Tor is also publishing the second novel from legendary science fiction author Greg Bear’s Halo Forerunner trilogy in 2012.  HALO: GLASSLANDS will be published on October 25, 2011. An unabridged audiobook edition will publish simultaneously with the new novel.

#1 New York Times best-selling author Karen Traviss has received critical acclaim and award nominations for her Wess’har series, as well as regularly hitting the bestseller lists with her Star Wars and Gears of War novels.  Her first foray into the Halo Universe came with “Human Weakness,” a short story from Fall 2009’s New York Times bestselling “Halo: Evolutions” anthology that introduced her to millions of new Halo fans. A former defense correspondent and TV and newspaper journalist, she lives in Wiltshire, England.

“HALO is one of the grandest, most epic science fiction stories ever told, across media,” says Tom Doherty, President and Publisher of Tor Books.  “The Halo novels are one of the most popular and well-loved genre series published this century, and we’re thrilled to have Karen to continue that grand tradition.”

HALO: GLASSLANDS, will follow-up the events and characters from Halo: Ghosts of Onyx in the wake of the final events of Halo 3.

“Although Karen’s novel deals with the characters and events from ‘Ghosts of Onyx,’ it’s the wonderful new characters and scenarios that she brings so vividly to life that will excite Halo fiction fans,” says Frank O’Connor, Franchise Development Director for 343 Industries. “We get an incredible opportunity to explore the Halo universe in the aftermath of the Covenant war, and unveil some mysteries and storylines that will connect readers to a compelling corner of the Halo universe. I can’t wait for readers to enjoy this book as much as we have.”

The Halo franchise is an award-winning collection of properties that have grown into a global entertainment phenomenon. Beginning with the original “Halo: Combat Evolved” for Xbox in 2001, the rich fiction of the franchise has since inspired a series of blockbuster Xbox and Xbox 360 video games, New York Times best-selling novels, comic books, action figures, apparel and more. To date, sales in the Halo franchise have eclipsed $2.3 billion. Microsoft recently dropped a bombshell on Halo fans at E3 with two big announcements. Coming Nov. 15 2011, Microsoft will release “Halo: Combat Evolved Anniversary”, a spectacularly remastered version of the original “Halo” campaign bundled with some of the most beloved multiplayer maps in “Halo” history – all created in celebration of the 10th anniversary of one of the most beloved franchises in gaming history. Also announced was “Halo 4,” the hugely-anticipated next blockbuster installment that will mark the beginning of a new Halo trilogy when it releases in-stores during the 2012 holiday season.

About Tor Books
Tor Books, an imprint of Tom Doherty Associates, LLC, is a New York-based publisher of hardcover and softcover books, founded in 1980 and committed (although not limited) to SF and fantasy literature. Between an extensive hardcover and trade-softcover line, an Orb backlist program, and a stronghold in mass-market paperback, Tor annually publishes what is arguably the largest and most diverse line of science fiction and fantasy ever produced by a single English-language publisher. Books from Tor have won every major award in the SF and fantasy fields, and for the last twenty-four years in a row the company has been named Best Publisher in the Locus Poll, the largest consumer poll in SF.