“The difficulty with this conversation is that it’s very different from most of the ones I’ve had of late. Which, as I explained, have mostly been with trees.”

It’s not possible to truly assess the success or failure of any endeavor without the proper time and space for reflection.

With something as massive and impressive (and sometimes oppressive) as the San Diego Comic Con, it took me just about ten days to really arrive at an opinion about the better part of a week that I spent there. 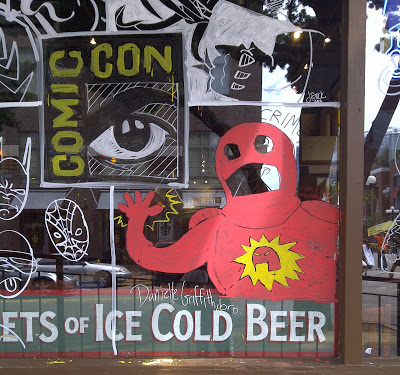 Unlike most of my past seven Comic-Cons, I wasn’t trapped behind an exhibitor’s booth, or rushing madly from appointment to appointment. In many ways this was my first full-on fan experience in over a decade.

How did it stack up?

The official attendance record hasn’t been released, but the self-imposed limit of 125,000 does not include the professionals, exhibitors and volunteers that add to the convention center population, and which every year seems to cap 165,000.

I will say that it seemed easier to navigate the exhibit hall this year than in past years, but I don’t think that lesser attendees was the cause. As the movie and gaming studio presence has increased noticeably over time, so have the autograph panels, p.r. sessions, film screenings, and fan-targeted specialty programming. This has made the floors above the main exhibition hall as big (if not bigger) an attraction as the commerce below. In other words, with ticket prices raising steadily, that extra expenditure is leading families to cash in on the free entertainment available on the second and third floors, forgoing shopping altogether. A family of five is likely to spend a hundred dollars a day on convention food, which (ironically) is taking food out of the mouths of the vendors. This recession isn’t helping either.

I’ve been comparing notes with a lot of my vendor pals, and with very few exceptions, the business was down. Way down. And with table costs also steadily rising for exhibitors, several have expressed doubt as to whether they’ll be back next year, but many are afraid to let their tables go for fear of the three year long waiting list that new vendors face should they decide to skip a year. Some long-time vendors may end up subletting a portion of their table space to offset their overhead. Artists and small press sellers realized that new product is essential, which pushes up their below the line costs, increasing the risk with the investment.

Next year the admission prices will skyrocket, with single day passes running $40 each for Thursday through Saturday, and Sunday passes costing $23 each.

In past years, full-show passes were discounted as an incentive/reward for advance purchase, but now they are going to be $150 ($175 if you want to attend the Wednesday Preview Night), which is actually more expensive than the sum of individual day passes. That’s $45 more than they were this year! Price increases to the consumer have had an habitual impact on vendor profits -especially those vendors with inexpensive merchandise. In other words, the original focus of this 41 year old pop-culture celebration, memoribilia sales, may disappear altogether if movie studios are allowed to buy more floor space for propaganda purposes. There is a real danger that Comicon could turn into another CES.

I counted only a dozen tables or booths that dealt exclusively in vintage comic books this year. Last year there were at least fifteen.

I noticed also that many Artist Alley folks chose not to even bother attending their tables until Saturday and Sunday, and the days of getting great $20 drawings are long gone. People I’ve never heard of were charging up to $80 for convention sketches –and not getting it.

That doesn’t even address the prices at some of the original art vendors’ booths. I don’t think I saw a single page for less than $100 anywhere.

I wasn’t expecting to see any Jim Lee splash pages for a c-note, but let’s face it: there are a lot of transition pages in comics that don’t have much action on them, and drawn by people who aren’t exactly household names; that stuff should be half a yard at best. Back in ’94 I loaded up on Preacher pages for between $40 and $65 each. Of course, I sold those same pages two years ago for a couple grand and the guy that bought them from me got $4k -for two pages, one hour after he bought them from me! These are not typical examples, of course, but without the promise of increased value, there is no speculator market, and demand will dry up.

Back then, you could also get classic Aparo, Buscema, Infantino and Colan pages (and less impressive Perez and Byrne pages) for a couple hundred bucks. Now you can’t get a damn Night Force page for less than $600.

Granted, those pages are thirty years old now, but contrarily these days, the upfront cost is high and the ceiling for value is low as more and more comics are produced for smaller and smaller audiences. With many comics being produced entirely digitally, there is speculation that hand-drawn work of any kind will become valuable, but it’s nostalgia that creates value, and with smaller readership there is less overall nostalgia.

Designer toy dealers seemed to do well with show exclusives. The Stay Pufft Marshmallow Man toy was sold out on the first day it was made available at the Warner Brothers booth. Who knew there were so many Ghostbusters fans in this day and age?

On the other hand, as a fan, the panels upstairs were great. I even dug standing in line and talking to other geeks who take this stuff as seriously as I do.

I almost prefer that interaction with other fans to the panels themselves, but watching industry pros squirm when asked a tough question by a die-hard fan whose been nonplussed by a recent story arc is nothing short of awesome. Kudos to Cliff Chiang for handling questions about a Wonder Woman run he had nothing to do with -and doing so with class. Let me also say that I can’t wait to see his new series with writer Brian Azzarello. I’m not an autograph hound, so I didn’t witness any of the crazy Twihards or other celebrity stalkers, but I heard that the autograph sessions were well handled from people I ran into after they’d been there. In some cases, the look of elation on their faces said it all.

For me this year, the best aspect of this massive show was the interaction on a personal level with other attendees.

Even though the numbers weren’t as big as last year, people were happy to spend time with other like-minded people. The networking was fantastic. In a sluggish economy, meeting the right people at an event like this can determine your future, and the artists with whom I spent most of my time were thrilled about the possibilities that arose from attending the right parties, mixers and hotel lobby meetups.

So this year it was the promise of future prosperity more than point of sale profit that made the effort, travel and exhaustion worthwhile. Some of them have already recovered and gotten straight back to work. I hope to see many of them at various events scattered throughout the remainder of the summer, and of course at next year’s Comic-Con.