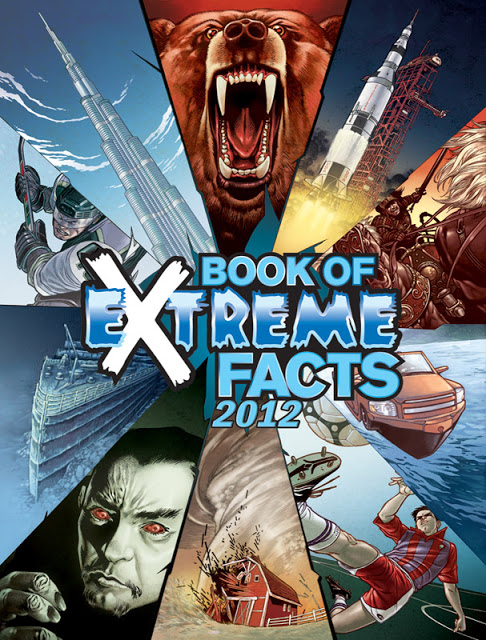 Focusing on the information that I hold dearest to my heart, trivia, the Book of Extreme Facts 2012 is packed with facts and minutia guaranteed to keep you entertained and sitting on the toilet reading, long after you’ve wiped.

Bigger! Stronger! Faster! And Now in Book Form!
BOOK OF EXTREME FACTS 2012 features the most compelling facts and records from around the world and outer space

Who invented the human cannonball? What animal survives the winter by freezing? What’s older than the stars? Find out all this and much more in IDW Publishing’s new BOOK OF EXTREME FACTS 2012, now available in comic and book stores throughout North America.

“The BOOK OF EXTREME FACTS 2012 is a fresh take on the genre, with a mix of records and facts beautifully illustrated with art and photography,” said editor and co-writer Kris Oprisko.  “Plus, we wanted to make it easy for readers to become involved in future editions… we encourage everyone to try to set their own record and see themselves in next year’s book!”

Offering 168 pages of out-of-the-ordinary, freakish and outlandish facts and records, the BOOK OF EXTREME FACTS 2012 is stuffed with incredible items on thousands of fascinating subjects, from exotic animals to the ancient world, rotating skyscrapers to deadly storms, freaky people to high tech gadgets.

Besides featuring incredible facts, The BOOK OF EXTREME FACTS also challenges readers to break the book’s records or create entirely new ones for a chance to appear in the next edition. Readers can submit their facts or records anytime at BookofExtremeFacts.com, Facebook, or Twitter, @extremefacts.