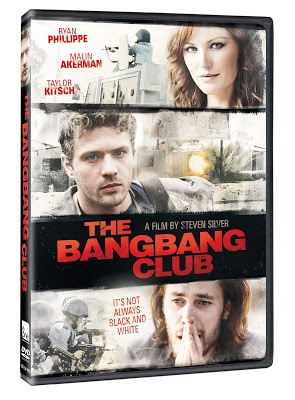 Based on the acclaimed memoir by Greg Marinovich and Joao Silva, THE BANG BANG CLUB is the real life story of a group of four young combat photographers — Greg Marinovich (Ryan Phillippe), Joao Silva, Kevin Carter (Taylor Kitsch) and Ken Oosterbroek — bonded by friendship and their sense of purpose to tell the truth.

Risking their lives to show the world of the brutality and violence associated with the first free elections in post Apartheid South Africa in the early 90s, THE BANG BANG CLUB tells the remarkable and sometimes harrowing true story of these four photographers, recounting their relationships and the stresses, tensions and moral dilemmas of working in situations of extreme violence, pain and suffering. And, while this intense political period brought out their best work — two won Pulitzers – it also cost them a heavy price. Exploring the thrill, danger and moral dilemmas associated with exposing the truth, this highly acclaimed and compelling film from director Steven Silver, also starring Malin Ackerman, has been called “a haunting lesson in war-zone journalism… excitingly capturing [a] chaotic era.”


To enter, please send an email with the subject header “BANG BANG CLUB” to geekcontest @ gmail dot com and answer the following question: