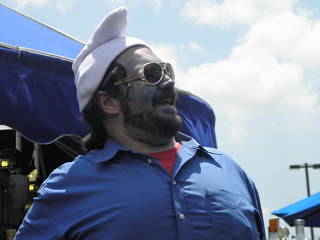 Matt. Murray’s name might be familiar to FOG! readers.

As a former columnist and editor for the site, Matt. covered many aspects of geek culture.  One of his loves, The Smurfs, became the subject of his first book, The World of Smurfs: A Celebration of Tiny Blue Proportions, which was released to tie into the new film based on the property.

Matt., however, used the opportunity to make it a whole lot more than that, focusing on the history of the characters and creator, Peyo.  I chatted with the always passionate Mr. Murray about the book and his continued love for the characters.


First of all, as the first and possibly only Smurfologist; Why?

Well, I wouldn’t go as far as to call myself the first or only one, but as far as I know I’m the first one to get up in front of a museum full of people and publicly proclaim myself a Smurfologist.

In 2006, I was the curator of an exhibit of art and artifacts from the Golden Age of Saturday Morning Cartoons (1966 – 90), and I found that in assembling the research and materials for the exhibit that The Smurfs, for better or worse, was one of the key shows in that era of television – and I’m not just talking about in reference to kiddie shows or animated programming. 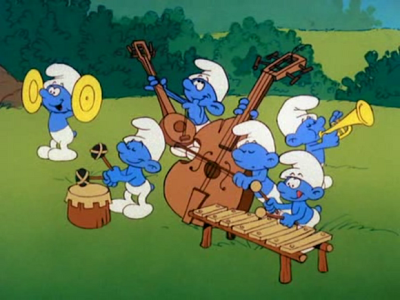 The Smurfs was a huge phenomenon in the 1980s that reached all age groups and people from all walks of life, and even outpaced most of the popular Prime Time shows in the Nielsen Ratings.

However, that’s all that Americans remember of The Smurfs if they remember anything at all.

When writing my exhibit, I ran across this rich history of the characters dating back to the 1950s and wanted to spread the knowledge.   So, I gave my first “Smurfology 101” lecture prior to an exhibit tie-in screening of Smurfs and the Magic Flute and have found myself running with the title since then.

What interests you so much about the characters?

At first, it was a matter of nostalgia, and reconnecting with the absolute adoration of the cartoon show I had when I was four.  When The Smurfs debuted in 1981, I was more than swept-up in Smurf-a-mania, and I dragged my parents and grandparents into it with me.

So, The Smurfs became part of our family history, to an extent.

Between the ages of 10 and 30, though, I could barely be bothered with The Smurfs – except to maybe pick up a cel to fill out my animation collection.  But, once I got into tracking down the original Franco-Belgian comics albums and reading those, I found a real appreciation for the art and storytelling in the somics, and in turn some of the episodes of the animated series.

At their best, The Smurfs stories are great pieces of medieval fantasy.

There’s magic, mystery, dragons, adventure… and the character design and artwork is deceptively simple.  Once you also start to understand the men who wrote the stories, you realize that there are really sly historical references and some intelligent bits of storytelling behind the comics.  Some of the episodes of the animated series reflected that same kind of spirit, and they’re still enjoyable to this day.

Ultimately, I can’t tell you exactly what it is that had me so wrapped up in The Smurfs 30 years-ago, or even today for that matter…  They’re just, for lack of a better word, smurfy.

Were you exposed first to the Peyo comics or the animated series and when you discovered them in the other medium, what was your reaction?

I was first exposed to the toys!  The Schleich figurines and Wallace-Berrie stuffed animals were available in the States before the Hanna-Barbera cartoon show hit the air.  I had a few here and there, and then when the show hit a couple of years later, I went about as Smurf crazy as everyone else.

While I had a few of the storybooks adapted from the actual Peyo comics, I never had the albums themselves until I was in my 30s.  By then I was running a museum dedicated to the promotion and exhibition of comic and cartoon art, so at first I approached them cerebrally – but it’s hard not to get caught up in how much fun they are.

What was the genesis of your book?

Although doing something like this had been a hope of mine, especially after participating in the special features for the Warner Bros. DVD sets, none of it seemed possible until I was approached by becker&mayer! – the company that designed, edited and produced the book for Abrams Image to publish. 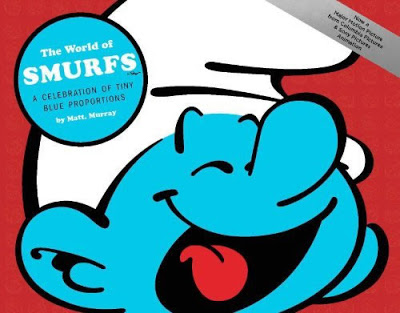 The title and release date were already in place for the book, and the editor,  Amy Wideman, had approached a few other authors b&m! had previously worked with on comics and pop culture properties… who referred her to Jim Salicrup of Papercutz (current publishers of The Smurfs comics)… and Jim, who attended my first Smurfology lecture in 2006, turned down the offer to write it himself – citing that I was the man for the job.

Next thing I knew I had a little under a month to deliver the product.

In addition to whatever research I had accumulated over the years, Lafig Belgium (the company which controls the rights to The Smurfs) sent me a wealth of material, much of it in French, which I had to use as primary sources.   Lafig and Sony Pictures Entertainment were very involved in the editorial process, but for the most part, I was given a lot of leeway in terms of my writing because I demonstrated a love and respect for the original material, the characters, and their creator, Peyo.

The folks at b&m! were awesome in terms of allowing me input to the design of the book and picking the “interactive-features.”  While they had spoken to the rights holders and already decided what kind of special do-dads would be in the book, one of my first conversations with everyone was about what I thought they should be exactly – and that’s where I got to suggest: an excerpt from the “Schtroumpfs noirs” mini-comic (never published in America);  a reproduction sketch of an elf that Peyo did in the 1940s which clearly was the basis for The Smurfs; and probably one of my favorite pieces of “nerd porn” of all time, the centerfold pull-out map of the Smurf Village.

Your book covers the entire history of The Smurfs.  What did you learn when researching it?

I learned a lot about their creator Peyo (aka Pierre Culliford), and I was proud of the fact that I got to share a fraction of his story in the book.

The World of Smurfs marks the first time that an official biography of Peyo and some of the early history of The Smurfs property has been published in English and to me, that was the coolest part about writing it.

It definitely opened the doors for me in terms of exploring more of the “Golden Age of Belgian Comics” that The Smurfs grew out of.   There are some amazing comics and beautiful artwork that come from that era – such as Franquin’s Spirou et Fantasio  and Morris’ Lucky Luke –  which I wouldn’t have been as aware of had I not had to done the research on Peyo and his contemporaries.

You also consult on the current reprint series from Papercutz.  Is there a particular story that you consider to be a favorite and why?

Yeah, Jim Salicrup attended that first Smurfology lecture in 2006 and according to him, it kicked off his three year pursuit of the property which resulted in the ongoing reprint series. 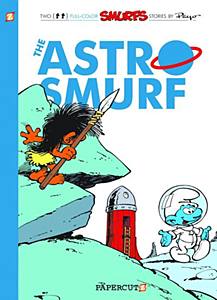 Volume Seven, The Astrosmurf was just released at San Diego Comic Con and that’s definitely a favorite of mine.

However, I also love: The Smurf King which was Peyo and writing partner Yvan Delporte’s parable about the Nazi occupation; The Purple Smurfs which has a Romero-zombie vibe ten years before the genre was created; and the” first” Smurfs story, The Smurfs and the Magic Flute, which is actually a Johan and Peewit comic that debuted the Smurfs as secondary characters.

I used to hate the Johan and Peewit episodes of the cartoon when I was a kid, and now I find that I enjoy their comics more than some of the Smurfs’ stories.  When I talk to Jim about the reprints I always try to talk him into printing more of the Johan and Peewit stuff.  I personally would love to see The Cursed Land  (Le pays maudit) get an English edition.  Awesome comic.

What did you think of the movie?  Did it capture the characters well?

The audience you see a film with in the theaters definitely affects your response to any given movie.  If you’re going to go see The Smurfs see it in a theater packed with either 6 or 62 year-olds, or a combination of the two.  It’s about 90% percent potty humor, so little kids and first wave Mel Brooks fans will tend to get a huge kick out of it.

As for the treatment of The Smurfs themselves, to me that was the best part.  The characters were absolutely gorgeous design and animation wise and the voice acting wasn’t nearly as “stunt-tastic” as it seems on paper.  I never thought I would be saying this, but Katy Perry as Smurfette was a complete non-issue.  Maybe it’s because I don’t know what she sounds like outside of her music, which I don’t enjoy, but her speaking voice wasn’t grating or irksome.  I bought the character of Smurfette wholesale.

After seeing the Smurfs and the Village and how great they looked on the screen, I ultimately wished that the studio had put more faith in them as to not drag the property out of its original milieu and pull the whole Enchanted/Fat Albert/Alvin and the Chipmunks bit – but Sony Pictures Entertainment made a very successful piece of product that is pleasing crowds despite an almost universal critical drubbing… so, commercially their choice is defensible.

I hope now that that’s out of the way, and The Smurfs are re-established as commercially viable characters, that the sequel (planned for August 2013) can drag the property back to the Enchanted Forest in the Cursed Land and go full smurf.   Without too much work at all it really could be a Lord of the Rings for the family set, and it’s personally disappointing to read about a movie like Candyland strive to be that by force, when it’s built-in to the 53 plus years of pre-existing Smurfs history.

Movie-wise, I just had a geek-gasm over Rise of the Planet of the Apes.  Man, did they get that one right on a lot of levels.  A great sci-fi/monster movie that not only was respectful of the original material, but in my opinion, on par with the ’68 flick.

Comics-wise, I just whipped through Jeffrey Brown’s Incredible Changebots Two.  It’s a must read for Transformers fans and Golden Age Saturday Morning cartoon dorks.   Plus, since it’s done by Jeffrey Brown (who actually is both) it’s palatable for indie snobs and the “comics are graphic novels” set.
I haven’t had a chance to listen to any good new music lately, so I’m game for any suggestions that FOG!’ers have…

Be sure to check out Matt.’s Smurf blog HERE!
Matt.’s book The World of Smurfs: A Celebration of Tiny Blue Proportions is available now