I saw The Rise of the Planet of the Apes this morning and loved it.

For many POTA fans (and newbies), I’d imagine that after seeing it you’re going to spend some of this weekend watching some of the previous films (Hell, I even watched the Tim Burton one for a few minutes the other night on FX when I was filpping channels), tv show, animated series or revisiting one of the many print spin offs including the comics and the original novel.

Unlike most series, Planet of the Apes‘ history is constantly evolving and at times contradicting itself.  Which can be frustrating, but can be awfully fun trying to make sense of it.

Hasslein Books currently has two phenomenal titles, both by Rich Hadley available that I’m fortunate to have in my library and have gone back to again and again.

Timeline of The Planet of the Apes: The Definitive Chronology 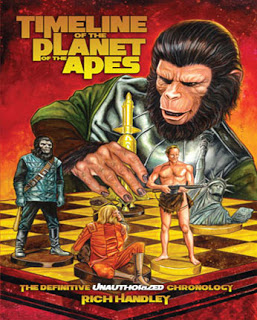 Planet of the Apes, a classic post-apocalyptic sci-fi drama, has riveted audiences with its stunning performances, brilliant make-up work, resonant soundtrack and powerful statements on humanity, science and religion, as well as the jaw-dropping revelation in its legendary final moments. But the 1968 film was just the beginning of the story.

Four sequels, two TV series, a 2001 film re-make, and more than a dozen novels and 120 comic books later, Planet of the Apes remains a living, breathing mythos. To commemorate the franchise’s 40th anniversary, Hasslein Books brings you Timeline of the Planet of the Apes, a 322-page, softcover volume that explores:

This book covers every film, episode, cartoon, novel, comic, short story and audio-tale produced under the Apes banner over the past four decades—including rejected or unpublished tales unavailable to fans. No other reference book has covered the saga’s expanded universe so completely.

Along with a detailed timeline spanning millennia, this volume features a gallery of more than 350 cover images, a recommended viewing/reading order, an examination of time travel in the Planet of the Apes mythos (both on screen and in print), and a title/creator index of published fiction—plus, insightful notes discussing preliminary and discarded story concepts, inconsistencies and discontinuities, unpublished lore and other fascinating trivia.

The Lexicon of The Planet of The Apes: The Comprehensive Encyclopedia

If you’ve longed to learn more about Planet of the Apes… if you’ve devoured the films and TV series, as well as the comics and novels that continued their story… if you’re tantalized by time travel and titillated by trivia… if you think you know all there is to know about simian society… then Lexicon of the Planet of the Apes is just for you.

Written by Timeline of the Planet of the Apes author Rich Handley, and weighing in at more than 420 pages—nearly 100 more than the timeline book—with layout and design by Paul C. Giachetti, this softcover volume contains:

John Muir calls Lexicon of the Planet of the Apes “the realization of a childhood fantasy… the book I only wish I had in hand when I was twelve years old and longing for more detail, more knowledge, more understanding of time warps, Hasslein Curves, Achilles Lists and the like.”

Designed for casual and avid fans alike, this volume will help you learn everything there is to know about the upside-down world of Planet of the Apes.

These may be a little daunting for the casual fan, but fear not; both books are well worth your time and money and are so ridiculously comprehensive that it’s staggering.  I’ve always considered myself a casual fan of the franchise, but simply by reading these books, it’s pretty hard to not want to dive into the mythology full force.  The highest of geek recommendations.

For more information check out the Hasslein Books Website.

In this article:Books/Literature, Geek, Planet of The Apes