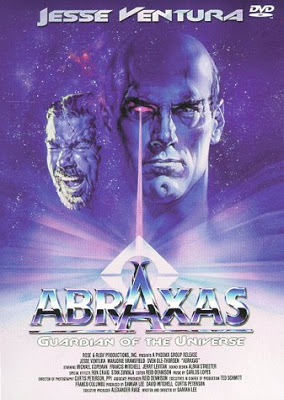 Okay, so most people would rate Predator as the greatest, but those people lack vision. Abraxas, Guardian of the Universe is not only a full-length celluloid salute to pure cheese, it stars the paranoid former governor as Abraxas THE F*CKIN’ GUARDIAN OF THE UNIVERSE (I guess He-Man was sick that day).

How much more do you need?

Okay here it is:

Abraxas is a pseudo-policeman who is 9000 years-old and goes around the galaxy with a partner named Secundus. These “policemen”, or Finders as they are called (whatever) are equipped with a device called the “Answer Box” that scans various things and if they don’t meet a certain (and I’m not making this up) mathematical equation called the Anti-Life Equation they will disintegrate.

You keeping up with this hot mess?

Anywho, Secundus has delusions of grandeur and wants a bunch of power….yadda, yadda, yadda chaos ensues and shit gets blown up.

Need more proof? The trailer’s after the break.

Even better news? The masterminds behind Rifftrax have indicated that this gem will be getting its own commentary track in the near future.