“Three hundred years ago a prisoner condemned to the Tower of London carved on the wall of his cell this sentiment to keep up his spirits during his long imprisonment: ‘It is not adversity that kills, but the impatience with which we bear adversity.'”

Five days ago a surprise court hearing freed three men who had spent the past 18 years in prison for crimes that most people believe they did not commit.

Teenagers at the time of their arrests, Damien Echols, Jason Baldwin and Jesse Misskelley Jr., were at their worst, heavy metal fans; a high-school dropout, a kid that liked to draw and a borderline mentally retarded boy. Improperly conducted interrogations and questionable evidence collection that never would have stood trial elsewhere convicted Echols to death row, Baldwin to a life sentence, and Misskelley to a life sentence plus two terms of twenty years. 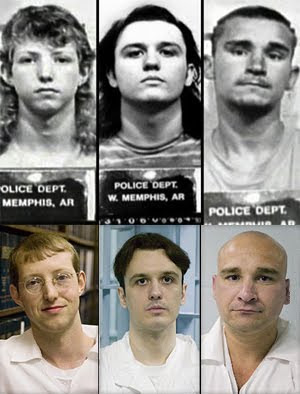 The West Memphis Three as they came to be known were the subject of two documentaries; a third has just gotten a new ending with the suspects’ release. The terms of that release will likely prove as controversial as their initial imprisonment.

In what appears to be little more than the state of Arkansas’ attempt to negate any restitutional lawsuits, the terms of release had the three accepting a guilty plea in exchange for time served without having to admit to guilt. After 18 years of likely unlawful imprisonment and an opportunity to walk free, it’s easy to see why three innocent men might take what sounds like such a crappy deal to those of us who aren’t currently incarcerated. After two completely bungled trials, not wanting to take the chance of an unfavorable outcome is understandable.

The defendants have had a large group of celebrity supporters throughout this ordeal, including Eddie Vedder, Johnny Depp and Peter Jackson. In 1993, documentarians Joe Berliner and Bruce Sinofsky actually produced evidence that should at the very least warranted a new trial if not proven their innocence, but the request for a new trial was denied. Foreman and jury misconduct, DNA testing, witness recant and a small mountain of other information compiled to compel the hearing which took place five days ago.

On August 19, 2011, they entered Alford pleas, which allow them to assert their innocence while acknowledging that prosecutors have enough evidence to convict them. Judge David Laser accepted the pleas and sentenced the three to time served. They were released with ten year suspended sentences, having served 18 years and 78 days in prison. While they are technically exonerated based on the DNA results, their convictions remain on their records and police refuse to pursue for any additional suspects. Regardless, Echols, Baldwin, and Misskelley vowed to continue to clear their names and find the real killer(s).

Viewers of the documentaries Paradise Lost and Paradise Lost II have been led to believe that the stepfathers of two of the boys made better suspects than any of those convicted, but one of them was a regular police informant. It should come as no surprise that Arkansas ranks last in credit scores and education, ranks third from the bottom in child welfare and child poverty, and with stories like this brought to light with increasing frequency, it might rank first in police corruption.

Paradise Lost 3: Purgatory will premiere at the New York film festival, targeting an Oscar eligibility run before the end of this year. A win for the third film would really be a win for the whole trilogy, but the second film premiered on HBO making it ineligible for an academy award. The newly freed documentary subjects spent an incredible evening on a hotel rooftop with Eddie Vedder following their release, but it wasn’t the support of famous musicians that caught their attention so much as the beautiful southern sky at dusk, an impossible view for the boys until now.