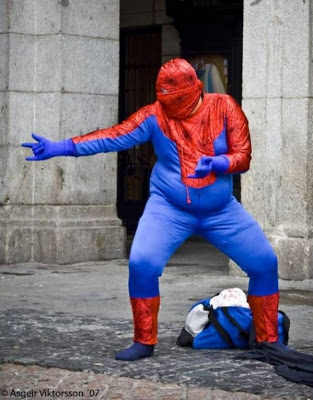 I’ve been on the West coast for the past few days, enjoying the fine temperate weather Oregon is known for in August (hello 80s) while my husband spent about 72 hours preparing our home for possible obliteration from hurricane force winds back in PA over the weekend.

I think it’s been a fair trade although he would say otherwise (he slept in the basement surrounded by his video game consoles and games…to protect them).

However, it’s nice to know that your friendly neighborhood superhero was out-and-about during the storm to keep the peace while Irene blew into town.

I don’t know about you, but I kinda thank that’s why the storm wasn’t all that bad, it took one look at a guy in a leotard and whimpered along.

Video of Spider-Man after the break.

NBC Brings the Funny to SDCC

NBC is set to bring the laughs to the nerd herd at this year’s San Diego Comic-Con. This year, the net will host panels...

Tired of waiting hours to find out if your former-roommates cousin’s friend put you on a list for a Comic-Con industry bash? No worries....

Director Rachel Talalay has comes a long way from her start as John Waters production assistant on 1981’s Polyester. Fresh out of Yale, the...