In commemoration of the new release, Batman: Arkham City Video Game, Figure of the Day will host a Dark Knight Event

Figure of the Day launched its site on May 6, 2011. It features a different pop culture collectible on a daily basis, ranging from action figures, bobble heads, busts, dolls to statues and everything in between at an affordable price with free shipping. The site dedicates a whole day to one figure. However, during events, https://www.figureoftheday.com will dedicate the site to a whole franchise offering various figures throughout the day.

On Monday, October 17, 2011, in commemoration of the new video game release of Batman: Arkham City, Figure of the Day will host a Dark Knight Event. The event will start at 6:00 am PST Monday morning, selling a figure from the Batman Franchise every hour until 12:00 am PST. Every purchase will enter the buyer in a raffle to win the brand new Batman: Arkham City video game. If the buyer purchases three or more figures throughout the day, they will receive a free Batman: The Dark Knight #1 comic book. For orders of four or more, the buyer will receive the comic book and a poster based on the Arkham Asylum or Arkham City video game. To close out the event, on Tuesday, October 18, 2011, a limited edition Batman statue will be featured. If a figure sells out during the hour it is featured, Figure of the Day will have a Striking Deal until the next hour.

And thanks to our friends at Figure of The Day, we’re giving away two Batman: Arkham Asylum Joker action figures! 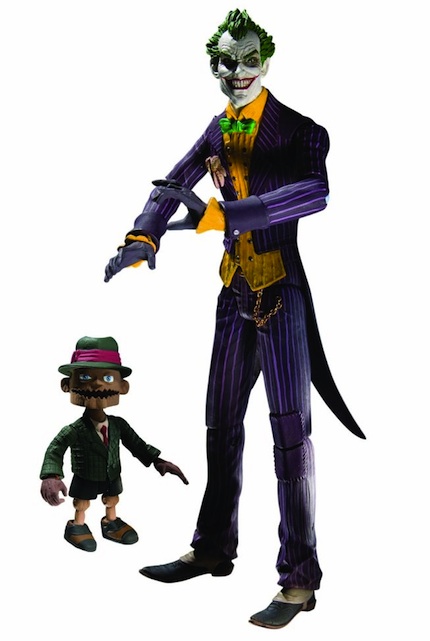 To enter, please send an email with your name and address and the subject header “JOKER” to geekcontest @ gmail dot com and answer the following question:

What actor voiced The Joker on both the Batman animated series and in the Arkham games?

U.S. residents only. You must be 13 years old. Only one entry per person and a winner will be chosen at random.

In this article:Action Figures, Contest/Giveaway