Sorry for the continued lateness of this column.

The latest snafu is a serious computer issue (Who has two thumbs and a computer that randomly opens and closes files and moves words around?  Um…me?)

A new computer is coming next week as will lots more DVD reviews.  Until then, check out these titles for queue consideration… 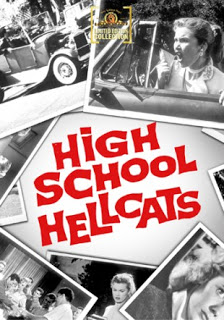 The Pitch
A troublemaking, all-girl gang rules over the females of a high school …until the gang leader is killed in an abandoned movie theater.  Stars Yvonne Fedderson, Brett Halsey, Jana Lund.  Directed by Edward Bernds.

The Review
It’s easy to see the appeal of this film that was released in 1958 as it truly embraces so many taboos at the time: surly teenage girls in tight sweaters and bullet bras, hot rods, rock ‘n roll, alcohol, girl gangs, fighting, and teen sexuality wrapped up in a film that often makes Leave it to Beaver look like a Tarantino film in comparison.

Typical of other AIP pictures at the time, High School Hellcats is ridiculously entertaining.  At a taut 69 minutes, the film is far from exploitive, and is ultimately a light and fun way to spend an hour.  It doesn’t hurt that the girls in the film are uniformly attractive (and likely grandparents or deceased now), and the film never appears to take itself too seriously.  Recommended. 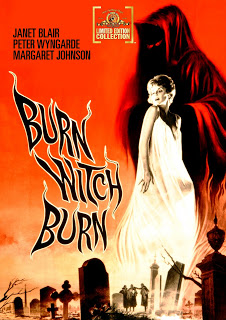 The Pitch
A college psychology professor sets out to debunk the occult, only to find himself under attack by a practitioner of the supernatural.  Stars Peter Wyngarde, Janet Blair, Margaret Johnston.  Directed by Sidney Hayers.

The Review
Reminiscent of Val Lewton’s work, Burn, Witch, Burn creates a an intense atmosphere by increasing the tone and the tension resulting in a pretty unforgettable film.

Wyngarde plays a God-believing, Occult-non-believing professor who discovers his wife has been practicing witchcraft, leaving her slightly unhinged and believing that it is resulting in their good fortune.  Together they burn her talismans and artifacts which results the conjuring of an actual demon and his entire life threatening to fall apart.

Beautifully shot, Burn, Witch, Burn is the best kind of thriller, one that grabs hold and doesn’t let go until long after the film is over.  The DVD includes a trailer.  A film that should be embraced by cinegeeks,  Burn, Witch, Burn deserves a full on commercial release, but nevertheless, it’s fantastic that it’s being released at all.  Highly Recommended. 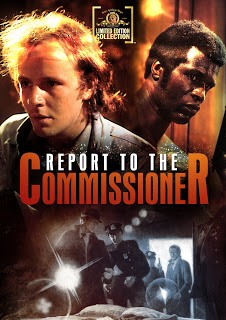 The Review
Pure Seventies New York gritty cop nostalgia with lots of famous faces looking much younger (Hello, William Devane, and Hector Elizondo!).  Unlike some more successful, similarly themed films, Report To The Commissioner has lots of good moments, but isn’t the wonderful, cohesive narrative one would hope for.  That might be, in part, thanks to the Rashomon style of structure.

Report To The Commissioner is an old-school, politically incorrect with unlikable characters and a spectacular foot chase that is as iconic as The French Connection‘s car chase.  Skip the spoiler laden trailer included as an extra.   Recommended. 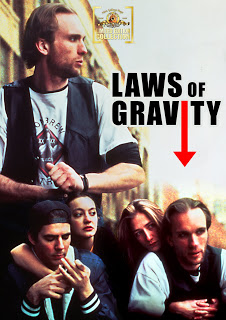 The Pitch
Two petty crooks, Jimmy and Jon, find the opportunity for a big score when Frankie, an old friend and ex-con, arrives in town with a load of illegal handguns for sale.  The guns are the source of tension for the friends and their families.  When a domestic dispute lands Jon in jail, Jimmy goes to sell the guns to raise the bail.  When Frankie discovers that his merchandise is missing, he goes after Jimmy and the guns.  Stars Peter Greene, Adam Trese, Edie Falco.  Directed by Nick Gomez.

The Review
Laws of Gravity is a forgotten gem, despite it’s acclaim when it was released during the indie film wave of the early nineties.  Reminiscent of early Scorsese, the film has fantastic performances (especially Greene, who despite recognizable performances in Pulp Fiction and The Usual Suspects, never became a big star), naturalistic dialogue and an almost-improv like quality that evokes Cassevettes.  The characters have a charm, but ultimately can’t even achieve being criminals, but rather tread in the notion that they are.  Laws of Gravity often feels like a documentary because the cinema verité appears to blur the line, but this is not a documentary.  It’s just really, really well done.  Highly recommended.