Over the course of the past year or two, I have become the target audience for publishers like Fantagraphics and NBM.

They translate a classic French title into English and release it in a nice format and I’m all over it.

Case in point: Gil Jordan, Detective: Murder By High Tide by M. Tillieux, a recent release by Fantagraphics – a book I picked up simply because it was a translation from a reputable source. 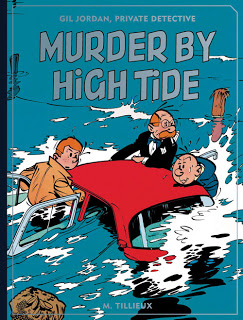 The book I received in the mail is a handsome hardback printed at original size, which means that it fits on the shelf with the rest of the albums.

It’s drawn in a very dynamic Charleroi style, which makes sense because the strip was originally serialized in Spirou magazine – the birthplace of titles like Lucky Luke and the Smurfs. These (and others) featured a looser artistic approach – the Charleroi style – than Herge’s Clear line.

Tillieux’s cartoons are a respite in a sea of manga-influenced artists. The heads are very round and lean towards caricature in the comic relief characters. On the other hand, the more serious moments are handled with a good deal of detail. There is a great deal of what Mort Walker refers to as “emenata”, but that was commonplace in the 1950s and makes me wish that they would come back. 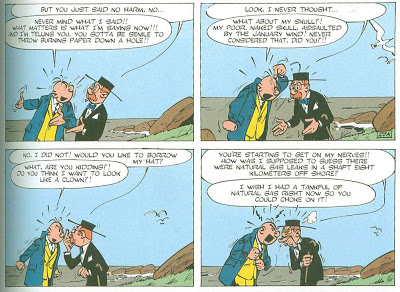 Some of the backgrounds remind me of Will Eisner’s more atmospheric opening shots, but the comparison ends there – they draw people completely differently. Still, there weren’t any points where I was unsure about what was happening on the page. 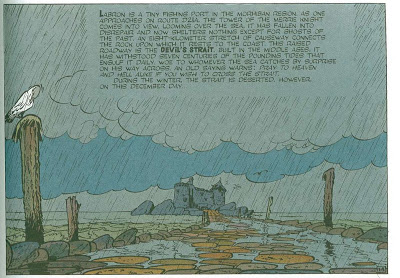 Fantagraphics has chosen to start with books 3 & 4 in the series, skipping the stories where the reader (and the creator) gets to know the title character, Gil Jordan, and going right for the good stuff. And these books are good stuff, the writing as well as the art.

Jordan (Jourdan in the original) has a small team that he works with – Crackerjack (Dragonfly in the original), a secretary and an Inspector Crouton that seems to follow them around, Lestrade-by-way-of-Clouseau. Crackerjack tells terrible jokes and Crouton takes pratfalls. But the plots are fairly nicely set up and move quickly. 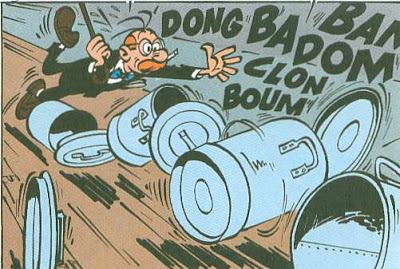 Book 3 is a murder investigation in a seaside castle that is only approachable via a causeway that experiences really rough tides – strong enough to destroy a car. (Shades of Mont St. Michel.) There is something in this story for every reader: mystery, adventure, humor, bad jokes and a real sense of menace. 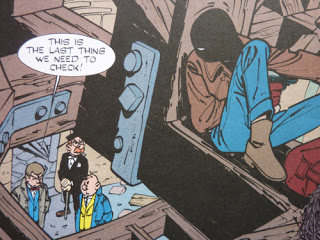 Book 4 is science fiction wrapped in pulp and presented with a straight face. The structure is pretty basic – prison break. Jordon elbows his way into the picture and the story moves from there. I can see why this series took off. I’d love to read more.

This is absolutely the kind of book that I would hand to someone who has expressed an interest in comics. The only overt genre elements are the default detective tropes and the aforementioned pulp sci-fi concept, which blends in almost seamlessly. The characters and the art do the majority of the work, which is absolutely as it should be. 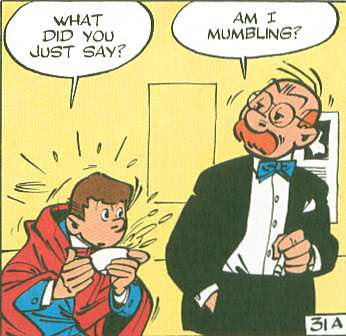