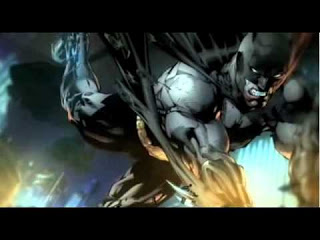 reruns of Big Bang Theory began. The show is off to a strong start, which is good because it’s one of the costliest shows to ever hit syndication (about half a mil per episode for local stations and $1.5 million on basic cable). I’m a fan of the show, and I’ve always respected the marketing savvy of the show’s executives. They’ve always maintained a high profile at comicon, and their advertisers seem to know (if not fully understand) the demographic. While on the merchandising side Warner has launched a major campaign in comic shops via a free backing board program that features Big Bang Theory manga on one side and DC Comics’ The New 52 on the other, I was still surprised to see this on national television.

Video and more after the jump.

Because both are Warner products, this is perhaps a no-brainer, except that it stands as a unique no-brainer in the history of both mediums. Warner has produced dozens of comic book tie-in shows over the years, but I have never before seen a television commercial for an entire line of comics in prime time before now. I can’t even remember seeing commercials on Saturday mornings as a kid, to be honest, but I’m sure there were at least some. This big push for the New 52 is a landmark in comic book marketing. Considering what broadcasters had to pay, the ad time on Big Bang Theory can’t be cheap. It is possible that the show’s producers own some of their commercial time slots and may have been able to package that New 52 commercial with the program, but that possibility would make this even more of a big deal than if DC foot the bill alone. Either way, this represents one of the shrewdest marketing campaigns of geekdom ever. And this is no hyperbole.

Why now? Why not before, when comic book circulation was in the millions? Well for one thing, comics really need the advertising. Hype outside of comic shops for comic books is generally relegated to the death of a major, multi-generational, legacy character. And since every single hero killed off in comic books has come back, even that reporting is a hard sell on mainstream news media. It’s no secret that the industry has been taking a major hit in subscriber base and casual readership, so this starting over from number one approach is close to a last ditch attempt to get kids reading comics again. This is no easy feat in a culture where kids are bombarded with the sexier appeal of video games, movies, free tv shows and even online comic book piracy. That doesn’t even begin to address the shifting age demographics. And it’s not just the kids that are leaving the hobby either -the pros are, too.

At a recent Drink and Draw session (a weekly LA gathering of artists who’ve combined their love of drawing with pub culture), I spoke with several old school pros who confided that comics just don’t pay enough. Sequential art legend Bob Layton is both sage and mentor to many of the younger artists, including big-name pros like Dave Johnson and Dan Panosian, and he is now working almost exclusively as a screenwriter, “Why work all month struggling to conceive, layout, draw and ink 22 pages for less than I make in a week as a (videogame and screenplay) writer?”

When I asked about creator owned projects I got a lesson in how things work.

“(A creator owned project)… it pays nothing unless it becomes a hit, so you work on a book for six months? A year? Maybe two? And for what? So you can pitch it as a movie to make some real money. I’ve just forgone the process. I start at the end now.”

In a city like Los Angeles, the proximity to Hollywood and the easier accessibility to showbiz people really does lend itself to launching spec projects on a laptop rather than illustration board, but its bound to be a whole different story for artists who aren’t 40 year veterans, right?

Daniel Landerman is the artists and creator of Dakota Rawhide, a self-published series of graphic novellas. His series is created entirely in photoshop, and is now available on kindle. Though Landerman’s published work is digital, his Art Center trained illustration chops are top shelf and reminiscent of the great fumetti and la bande dessinée pencilers, like Eugenio Sicamoro, Philippe Druilett, Guido Crepax and Enki Bilal. Why self publish instead of going to work for Marvel or DC?

“Basically there’s no need to.” Daniel’s bread and butter is freelancing for ad agencies, videogame developers and Hollywood studios who need talented, digital specialists for the product, which relies heavily on digital animation for backgrounds, foregrounds and everything in between. If Dakota Rawhide winds up coming soon to a theater near you, Landerman won’t be sharing the majority of his stake with a publisher who would demand ownership of his characters.

So why do talented artists still work in comics?

“I love it,” says six-time Eisner nominee Dave Johnson. While he may be the Susan Lucci of comic book award shows (loosing every time to Favorite Cover Artist, James Jean), he’s still a fan favorite and able to command a much higher price than a standard contract has to offer. Since Dave is more of an analog illustrator his original art closely resembles his published work and routinely commands peak pricing from comic art fans looking to collect his 100 Bullets or Deadpool covers.

Apparently a lot of other people still love making comics, too, and some of the best of them are involved in the New 52 at DC. But what if it fails? Will this lead to the end of comics?

Probably not. In order for there to be an audience for superhero films, there has to be a market for them, That market is established in comic books. That may lead to the major publishers becoming little more than marketing divisions for the larger entertainment conglomerates, and it may even mean that most mass market titles will be loss-leaders (titles that are published with the intention of losing money as a hook for a much more expensive or profitable commodity).

So if it is the end of the medium as I we know it, I feel fine.