This is the Ridleyest thing I’ve ever heard!”

This 2000 fantasy movie has a 10% rating on Rotten Tomatoes, where only 30% of the audience report liking it. 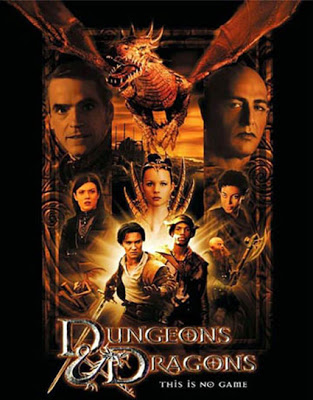 Full disclosure: When this movie came out, I was employed by Wizards of the Coast, writing Dungeons & Dragons.

Two years later, I was on the marketing team that brought you the second Dungeons & Dragons movie, Wrath of the Dragon God (yes, there was a second one – don’t you watch SyFy?).

The good, the bad, and the ugly on the movie after the break.

“Why don’t we just rob God while we up here.”

If you love Dungeons & Dragons (the game), you owe it to yourself to see this…just once.

If you watch every fantasy movie ever made, then you should watch this.

“If I ain’t drinking, you sure ain’t shopping.”

The Mages rule the Empire of Izmer. Empress Savina (Thora Birch) wants equal rights for the magic-less commoners. Profion (Jeremy Irons), a mage, has other ideas. He wants to rule the Empire himself. The Empress has a scepter that allows her to control gold dragons. Profion learns of another rod that allows the bearer to control red dragons. While he maneuvers politically to separate the Empress from her scepter, he sends his agent (and commander of the Crimson Brigade) Damodar (Bruce Payne) after the other rod. 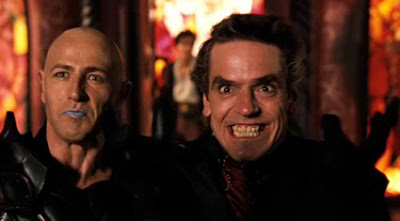 Meanwhile, Ridley Freeborn (Justin Whalin) has an axe to grind against the Mages. He decides to rob the Magic School with his buddy, Snails and stumbles into Damodar trying to steal.

“Not so talented eh, Mr Ridley!”
What the Hell happened that Hasbro (which owns Wizards of the Coast, which in turns owns Dungeons & Dragons) allowed this to happen?

Way back in 1990, Courtney Solomon (only 19 years old) convinced TSR to sell him the movie rights to Dungeons & Dragons.

When Wizards of the Coast bought TSR, Courtney still had the rights. Legally, there was no recourse but to allow him to make the movie.

Everyone knew that The Fellowship of the Ring was filming, but no one had seen it (this movie came out the year before). This movie is easily as good as most of the fantasy films that came before it – which isn’t saying much for them.

Because of my years at Wizards of the Coast, I know people who “advised” on this movie, and they swear up and down that it was on its way to being far, far worse. The advisors did everything that they could to improve things, but there were limits on their authority and, well, here is the result.

This movie unfolds like a junior high D&D game from the ‘80s. There are ancient artifacts, thieves, magic spells, wizards, a dwarf who goes berserk if you knock off his helmet, elves, and quests. Those games were fun – when we were 14.

Those games didn’t cost $35 million, though.

Among the things that sabotage the movie are: 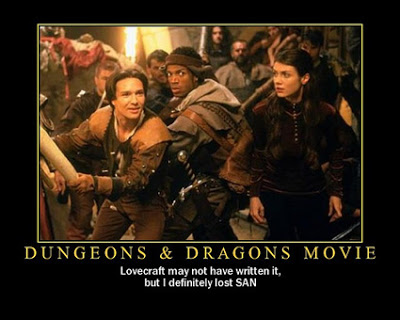 One of the writers hasn’t worked since.

The other didn’t work for twelve years.

You should Just Look Away.