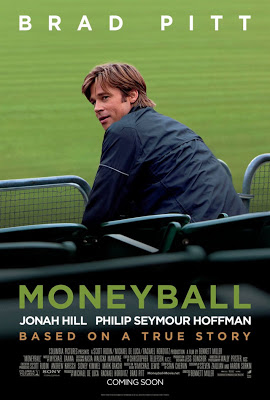 Moneyball confirms once again that Brad Pitt is a fantastic character actor trapped in the body of a leading man.

Based on a true story, Pitt plays Oakland A’s manager Billy Beane who following the departure of three key players decides to shake things up by rethinking how teams are assembled.  With the assistance of Yale graduate Peter Brand (Hill), Beane attempts to create a team that can compete with the large market teams at a fraction of the cost using analysis and a sabermetric approach to scouting players.

Unlike most sports films, much of Moneyball is cerebral, with the majority of the action focusing on the behind the scenes rather than on the field.  Esssentially the film is a sharp and funny look at loyalty, value, cynicism and morals that won’t be easy to forget during awards season.

Jonah Hill delivers his best performance and Philip Seymour Hoffman also shines as the team’s coach.  Moneyball is entertaining and an honest reminder that the most important aspect “isn’t whether you win or lose, but how you play the game.”