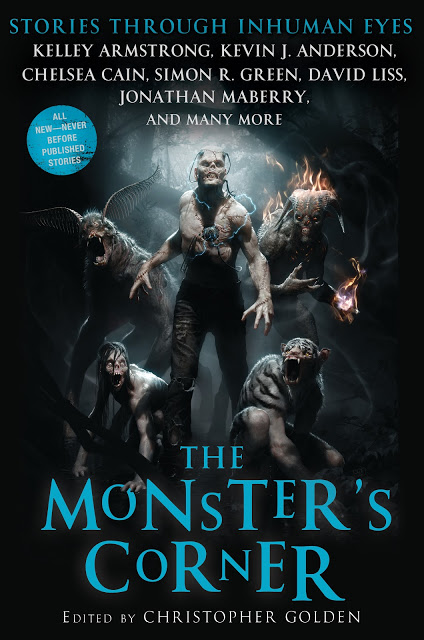 This week The Monster’s Corner: Stories Through Inhuman Eyes was released, an anthology with stories featuring “demons and goblins, dark gods and aliens, creatures of myth and legend, lurkers in darkness and beasts in human clothing,” all from the perspective that the monster is the hero.

From Lucifer to Mordred, from child-thieving fairies to Frankenstein’s monster and the Wicked Witch of the West, everyone squirms and breaks into a cold sweat thinking about those things that go bump in the night. They simultaneously pique our imaginations and fears. However, in most stories we get the perspective of the hero, the everyman, but we are all the hero of our own tale, and so it must be true for legions of monsters. From our point of view, the monsters may very well be horrible and terrifying, but of course they won’t see themselves in the same light. Their point of view is presented in THE MONSTER’S CORNER: Stories Through Inhuman Eyes, an anthology edited by Christopher Golden.

I had the opportunity to ask several of the contributors a few questions.  Find out what scares them, what their favorite monster is and more after the jump!

SARAH PINBOROUGH:  Everything. Death mainly, and the lead up to it. Running out of time for everything I want to achieve. Oh and heights. And those programmes that show you all the things that can go wrong with your ‘down belows’ as you get older;-)

CHELSEA CAIN:  Snakes.  I hate snakes.  I got a tattoo of a snake on my upper arm, in the hopes that it would help me “claim” the fear, and conquer it.  It didn’t work.

MICHAEL MARSHALL SMITH:  The passage of time, the thought of losing my loved ones, and that thing which keeps coming and sitting on the bed in the middle of the night. I’d love it to be a cat, but I know there are no cats in the house.

SIMON R. GREEN: A nun with a strap-on.

NATE KENYON:  The current economy. Our political system. Life without books. And anything that would threaten my kids–a terminal disease is at the top of the list.

DAVID MOODY: People.  I’ve given up on ghouls, ghosts and monsters, because the things I see people around the world doing daily on the TV news are far worse than anything I’ve ever seen in a movie or read in a book.  Greed-driven bankers, lying politicians, terrorists, popular uprisings being crushed with force, despots clinging onto power at any cost… take your pick.  Scares the hell out of me.  And thinking about what kind of a world my kids are going to grow up in scares me even more.

JEFF STRAND:  This is a totally generic answer, but spiders are unspeakably creepy.

PINBOROUGH:  The Honey Monster! But seriously, probably the vampire. Not the giittery ones, but the old school scary as shit ones.

MCILVEEN:  My favorite monster?  The one behind you.

SMITH:  Humankind. So varied, so resolutely capable of evil, and yet also capable of so much good. The tension between these different faces means the dark stories of their deeds will run and run.

GREEN:  The one who lives under my bed.

STABENOW:  Caliban (‘I shall be pinched to death!’)

KENYON:  Frankenstein’s monster. I love the idea of a beast coming to grips with what it is, wanting to be human, not sure of its own intentions. The struggles of the monster are so similar to those we all experience throughout our lives–who are we? Why are we here? What does it mean to be a “good” person?

MOODY:  Zombies are the scariest monsters, in my opinion, but I’m a big fan of werewolves too.  The split personality – the contrast between being a calm, placid human being half the time and a crazed, powerful wild animal the rest – and the lack of control over the change is fascinating.

What writer/book has had the biggest influence on your work?

PINBOROUGH:  Probably Stephen King as with all writers of the weird in my generation.  But also John Wyndham.  The book I love most is probably 1984.  Bleak, thought-provoking and dystopic.  You can’t ask for more.

MCILVEEN:  Tie between John Steinbeck’s Of Mice and Men and John Irving’s A Prayer for Owen Meany.

BELLAIRS:  The Face In The Frost; John Bellairs.

KENYON:  Like a lot of writers, I’d have to say Stephen King. The Shining was my favorite book when I was young. But there are many others, and I keep discovering more all the time.

MOODY:  John Wyndham – The Day of the Triffids.  It was the first post-apocalyptic book I read, and it changed everything from me.  It wasn’t just the incredible story that made it memorable, it was also how Wyndham anchored the horror in everyday normality and showed people just trying to survive rather than trying to make everything right again.  Wyndham made a book about eight-foot tall walking, flesh-eating plants feel somehow believable.

STRAND: Dave Barry, the funniest writer of all time.

Describe your story in ten words.

PINBOROUGH:  Read it and find out for yourself..;-) I hate log lines!

MCILVEEN:  What really gets you going can also get you gone.

SMITH:  What’s the worst monster in your life? You, of course.

STABENOW: Seductive sirens with a plan to be victims no more.

KENYON:  A tortured artist comes to terms with the beast within.

SARAH PINBOROUGH
Sarah Pinborough is the author of six horror novels. Her first thriller, A Matter of Blood, was released by Gollancz in March 2010 and is the first of the Dog-Faced Gods trilogy, which has now been optioned for a television series. Her first YA novel, The Double-Edged Sword, was released under the name Sarah Silverwood from Gollancz in September 2010 and is the first of the Nowhere Chronicles. Sarah was the 2009 winner of the British Fantasy Award for Best Short Story and has three times been short-listed for Best Novel.  She has also been short-listed for a World Fantasy Award.  Her novella, The Language of Dying, was short-listed for the Shirley Jackson Award and won the 2010 British Fantasy Award for Best Novella.

CHELSEA CAIN
Chelsea Cain is the author of the New York Times bestselling thrillers Evil at Heart, Sweetheart, Heartsick, and The Night Season. All take place in Portland, Oregon, and focus on Detective Archie Sheridan, rainbow-haired journalist Susan Ward, and Sheridan’s lovely nemesis, the serial killer Gretchen Lowell. Chelsea’s books have been published in over twenty languages, recommended on The Today Show, appeared in episodes of HBO’s True Blood and ABC’s Castle, and named among Stephen King’s top ten favorite books of the year.  NPR included her book Heartsick in its list of the top one hundred thrillers ever written. Chelsea lives in Portland with her husband and remarkably well-adjusted five-year-old daughter.

JOHN M. MCILVEEN
John M. McIlveen has five daughters. He lives in Massachusetts and works at MIT’s Lincoln Laboratory. John is, or has been, an electrician, a pipe fitter, a carpenter, a bookseller, a writer, an editor, a publisher, a facility engineer, an electrical engineer, a process engineer, an electrical and mechanical designer, a father, a son, a winner, a loser, a student, a teacher, a husband, an ex-husband, a beginner, a pro, on bottom, and on top. Someday he’ll figure it all out, but he likes being a father the most.

MICHAEL MARSHALL SMITH
Michael Marshall Smith is a novelist and screenwriter.  Under this name he has published over seventy short stories and three novels—Only Forward, Spares, and One of Us— winning the Philip K. Dick, International Horror Guild, and August Derleth Awards and the Prix Bob Morane in France.  He has won the British Fantasy Award for Best Short Fiction four times, more than any other author. Writing as Michael Marshall, he has published five internationally bestselling thrillers, including The Straw Men, The Intruders, and Bad Things, and 2009 saw the publication of The Servants, under the name M. M. Smith. His new Michael Marshall novel, Killer Move, will be published in 2011. He lives in North London with his wife, their son, and two cats. His Web site is www.michaelmarshallsmith.com.

SIMON R. GREEN
Simon R. Green has written over forty books, his best known series being the Deathstalker books (space opera), the Nightside books (private eye who operates in the Twilight Zone, solving cases of the weird and uncanny), the Secret Histories books, (featuring Shaman Bond, the very secret agent), and, most recently, the Ghost Finders books (traditional hauntings in modern- day settings). He rides motorbikes, acts in open-air Shakespeare productions, believes in ghosts because he’s seen one, and believes in near-death experiences because he had one.

DANA STABENOW
Dana Stabenow was born in Anchorage and raised on a 75-foot fish tender in the Gulf of Alaska. She knew there was a warmer, drier job out there somewhere and found it in writing.  Her first science fiction novel, Second Star, sank without a trace; her first crime fiction novel, A Cold Day for Murder, won an Edgar Award; her first thriller, Blindfold Game, hit the New York Times bestseller list; and her twenty-eighth novel and nineteenth Kate Shugak novel, Restless in the Grave, comes out in February 2012.

DAVID LISS
David Liss is the author of seven novels, most recently The Twelfth Enchantment. His six previous bestselling novels have been translated into more than two dozen languages, and several of them, as well as a short story, are in development as film projects. Liss also writes the monthly series Black Panther: The Man Without Fear for Marvel Comics.

NATE KENYON
Nate Kenyon’s first novel, Bloodstone (2006), was a Bram Stoker Award finalist and won the P&E Horror Novel of the Year. Bloodstone was followed by The Reach (2008), The Bone Factory (2009), and Sparrow Rock (2010). The Reach, also a Stoker Award finalist, received a starred review from Publishers Weekly and was optioned for film. Kenyon’s latest novel, StarCraft Ghost: Spectres, based on Blizzard’s bestselling video game franchise, will be released in the fall of 2011. He has recently signed on to write a novel based on the video game Diablo, again for Blizzard.

DAVID MOODY
David Moody was born in 1970 and grew up in Birmingham, England, on a diet of trashy horror and pulp science fiction books and movies. He worked as a bank manager and as operations manager for a number of financial institutions before giving up the day job to write about the end of the world for a living. He has written a number of horror novels, including Autumn, which has been downloaded more than half a million times since its publication in 2001 and has spawned a series of sequels and a movie starring Dexter Fletcher and David Carradine. Film rights to Hater have been bought by Guillermo del Toro (Hellboy, Pan’s Labyrinth) and Mark Johnson (producer of the Chronicles of Narnia films). Moody lives outside Birmingham with his wife and a house full of daughters and stepdaughters, which may explain his preoccupation with Armageddon.