“The function of the imagination is not to make strange things settled, so much as to make settled things strange.” –G.K. Chesterton

In the past fifteen years, the character 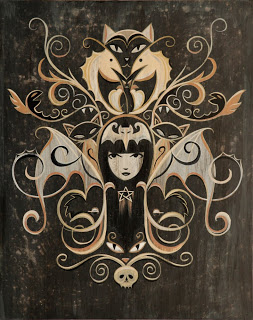 Emily the Strange has risen in popularity from a seemingly random illustration on a skateboard deck into a generational touchstone for tween girls (particularly the non-Barbie crowd). At this point, the licensing of artist Rob Reger’s signature character has become a cottage industry for future goths; one that includes comics, an apparel line and soon a major motion picture starring current teen it-girl (or should I say Hit Girl), Chloe Moretz. As this latest news was lighting up the showbiz wire, Reger was quietly opening his first major Hollywood art exhibit, called The Encyclopedia of Hallucinations. Part of that exhibition involves a contest, so alert your little sister and read on after the jump.

It’s always a challenge to impact the fine art world in a significant way, but for toy designers, comic artists and character licensors that challenge is different and perhaps more difficult. On one hand, the familiarity of their best known work enables them to reach an established audience, which can be an incredible asset for selling original art work. But on the other hand, that familiarity often breeds contempt among art critics and highbrow patrons who consider those works kitsch. So while it may not be very hard for a commercial artist to enter the gallery world based on the success of their strongest brand, reaching that next level (cover features in respected art publications, auction house representation and museum exhibition) is difficult if not impossible. For every Murakami, there are hundreds if not thousands of lesser known designers fighting to maintain relevancy while introducing new product lines and simultaneously working to realize lofty, artistic goals. Enter Rob Reger.

Rob’s art aesthetic and his design house, Cosmic Debris, grew from a tangle of roots joining the DIY punk scene of the 1980s with guerrilla art, surrealism, and nostalgia for the psychedelic 60s. Emily the Strange came to life in the early 1990s and became a beloved counterculture icon all around the world moving quickly from a sharp-witted T-Shirt sloganeer to the subject of gift books, comics, and ultimately a series of novels for young adults. She continues to be a voice for individualism, but in a greater context has become an icon of non-conformity. In many ways, Emily the Strange is the Mr. Natural of the middle school set, and like Robert Crumb (who also found fame in the Bay Area), Rob Reger must walk a tightrope between the two very different worlds of fine art and pop-recognition. Unlike Crumb, Reger is incredibly accessible, business savvy, and plugged into a network of friends and colleagues who have already reached that next plateau; people like Tim Biskup, who successfully charted a course of pop-sensibility, fine art acceptance and overall success. While neither yet has the kwan of Murakami, Biskup’s art is personally collected by museum curators, gallerists, other artists, celebrities and captains of industry, and it’s only a matter of time before an extra set of zeroes suffix his current price points (which are none-too-shabby as is). And Reger’s influence over two generations of young girls could easily follow the purchasing trends of post-Baby Boomers who grew up in the original age of Pop Art, eventually setting record purchase prices for Warhol, Basquiat and Koons. If the history of the twentieth century has taught us nothing else about marketing and collectibility, it has at least taught us that children become adults who make enough money to buy back their childhoods. Now, in the twenty-first century, that process seems to have expedited; millionaire twenty-somethings are blowing a lot of loot on nostalgia from the previous decade (exemplified by Justin Timberlake’s recent purchases of Michael Jackson memoribilia).

With The Encyclopedia of Hallucinations, 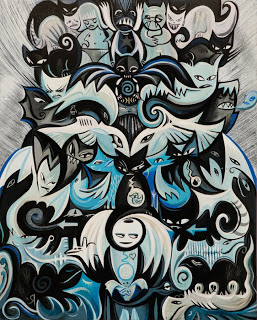 Rob Reger took a handful of elements from his best known work (bats, cats, and Emily) and produced a series of work that can be viewed from multiple angles, welcoming an abstract element to his mainly figurative work. He also priced everything quite affordably, reflecting the current economic climate but also welcoming early collectors, much like Haring and Nara had done in the formative years of their exhibition cycles. Reger has created a body of work with maturity and sophistication that embraces the recognizable without catering to easy money. Investment-minded parents would be wise to buy now and give later. What a cool graduation present one his paintings will make some day for your eleven year old daughter. I’m not saying that it will help pay off her college loans, but it might.

I bought one, and I don’t even have kids yet. 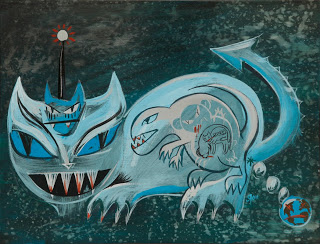 opened on September 2nd and remains on view until October 3rd at La Luz de Jesus Gallery. Attendees (both onsite and online) are asked to write a short description of what they see in Rob’s paintings. The best of these writings will be documented on the ArtOfficial Blog and promoted on Reger’s website, offering at least fifteen kilobytes of fame to enthusiastic little sisters everywhere.