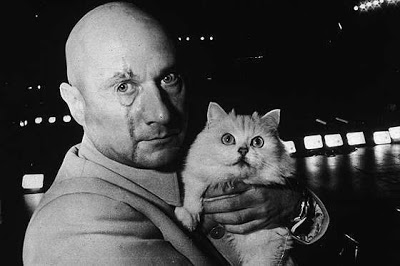 BOND 23 screenwriter John Logan has dropped a hint that Daniel Craig’s James Bond may be facing his ultimae arch-nemsis in his next adventure…  Ernst Stavro Blofeld.

I do hope his kitty is back as well!

WhatCulture! reports from a BAFTA Screenwriters lecture talk, an audience member reminded Logan that ten years ago he said that, in his opinion, “Bond should always fight Blofeld.”

Sure, Logan could just be fooling around, but let’s take a moment to look at this rumor logically:

1) Craig’s Bond has faced a worldwide organization in CASINO ROYALE and QUANTUM OF SOLACE, that was revealed in the latter to be named Quantum. Quantum is very much the modern day equivalent of SPECTRE faced by Bonds of the past.

2) Though Mr. White is a higher up within Quantum and still roams free following SOLACE, we still don’t know who really heads the mysterious organization. We only know it is made up of important figures from within the governments of many nations.

3) At one point Michael Sheen was rumored to have been cast as Blofeld. Though Sheen denies the rumor and doesn’t appear to be in the film, perhaps the rumor about Blofeld being a character was correct.

Javier Barden has already been cast in BOND 23 as the villain, while Ralph Fiennes as been cast as a character who may not be a villain but is “darkly complex.”

I doubt Bardem plays Blofeld because he really doesn’t fit the type, but he should make for a bad-ass main foe, perhaps the pawn working for Quantum similar to Le Chiffre in ROYALE and Dominic Green in SOLACE.

But, I think Fiennes would make a spectacular Blofeld….

Anyway, it’s mostly speculation at this point; that “hint” could just be misinformation or we may just be over analyzing Logan’s own preferences for the character.

BOND 23 is currently in pre-production and is set to be directed by Sam Mendes from a script by Logan, Neal Purvis, and Robert Wade.