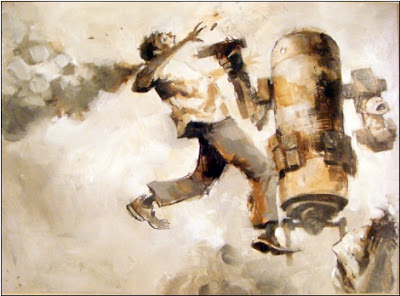 IDW is turning their hit comic book series Zombies Vs. Robots into a new medium, by launching the franchise into a prose anthology that will feature almost three dozen writers.

IDW COO/EIC Chris Ryall who co-created the mash-up with Ashley Wood will contribute to the book as well.

IDW’s gleefully subversive ZOMBIES VS ROBOTS comic book series from creators Chris Ryall and Ashley Wood will soon be eating readers’ brains from the inside via a series of short stories, novellas and more. As announced at the 2011 San Diego Comic-Con in July, the company plans for an ambitious slate of original prose stories set at different points in this epic adventure of a zombie apocalypse. In ZOMBIES VS ROBOTS, the clanking robots are built to fight the shambling braineaters, in a desperate attempt to save Earth’s dwindling population.   “It’s gratifying to see that ZvR has taken on an unlife of its own,” asserts Ryall, series co-creator and Chief Creative Officer/Editor-in-Chief for IDW. “Expanding from comics into prose is a logical progression, though as the heretofore sole writer of the series I must admit that letting other writers into our subversive little world was at first troubling. But now I’m fine with it. Really. Mostly. Especially since editor Jeff Conner has corralled such a talented array of writers to tackle some really bizarre and creative prose stories. As long as no one expects me to let them write ZvR comics, too…” A lurching cohort of writers—including such notable talents as John Shirley, Nancy A. Collins, Rio Youers, Brea Grant, Steve Rasnic Tem, Amber Benson, James A. Moore, Rachel Swirsky, Norman Prentiss, and John Skipp & Cody Goodfellow, led by Ryall himself—has been assembled to pen original stories of life during wartime in the ZVR world. “It’s our biggest project so far,” states Conner, the IDW contributing editor helming the ZVR prose program. “In a way it’s a follow-up to our Classics Mutilated release, at least in terms of its anything goes spirit. The results so far have been—um, riveting.”The rest of the ZVR writer roster includes: Dale Bailey, Amelia Beamer, Jesse Bullington, Simon Clark, Lincoln Crisler, Stephen Dedman, Rain Graves, Rhodi Hawk, Robert Hood, Stephen Graham Jones, Nicholas Kaufmann, Steven Lockley, Nick Mamatas, Jonathan McGoran, Joe McKinney, Gary McMahon, Mark Morris, Bobby Nash, Yvonne Navarro, Hank Schwaeble, Ekaterina Sedia, Sean Taylor, Simon Kurt Unsworth, Kaaron Warren, and Don Webb.

A film version of ZVR is currently in development through Sony Pictures, with Michael Bay’s Platinum Dunes as producer.

About IDW Publishing
IDW is an award-winning publisher of comic books, graphic novels and trade paperbacks, based in San Diego, California. Renowned for its diverse catalog of licensed and independent titles, IDW publishes some of the most successful and popular titles in the industry, including: Hasbro’s The TRANSFORMERS and G.I. JOE, Paramount’s Star Trek; HBO’s True Blood; the BBC’s Doctor Who; Toho’s Godzilla and comics and trade collections based on novels by worldwide bestselling author, James Patterson. IDW is also home to the Library of American Comics imprint, which publishes classic comic reprints; Yoe! Books, a partnership with Yoe! Studio.