It’s a cold and rainy day here on the East Coast, with snow on it’s way, so here are two reviews to consider before cozying up in front of the television.

One is a magical animated film.

The other is a terrible installment to a sea-faring franchise.

Place your bets which one I liked better and check out the reviews after the jump. 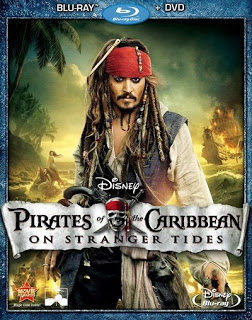 The Pitch
From Disney and Producer Jerry Bruckheimer comes all the fun, epic adventure and humor that ignited the original. Johnny Depp returns as Captain Jack Sparrow in Pirates Of The Caribbean: On Stranger Tides. A tale of truth, betrayal, youth, demise – and mermaids! When Jack crosses paths with a woman from his past (Penelope Cruz), he’s not sure if it’s love, or if she’s a ruthless con artist using him to find the fabled Fountain of Youth. Forced aboard the ship of the most feared pirate ever, Jack doesn’t know who to fear more -Blackbeard (Ian McShane) or the woman from his past. Directed by Rob Marshall, it’s filled with eye-popping battle scenes, mystery and all-out wit.

The Review
It really doesn’t come as a surprise that the film is based on a previously published novel and then Depp’s Jack Sparrow was inserted in it, as his character is entirely superfluous to the latest bloated, dull Bruckheimer pirate adventure.

Watching Depp slip into his schtick again is not only tedious, it’s enraging.  As the center of the series, this caricature is so removed from any kind of reality that there’s nothing there at all to care about.  It may work for the kids, but watching Depp prance around as this effeminate-drunken buffoon in a senseless and worse, boring, overlong and unnecessary contribution to the franchise is pure torture.  Extras include Disney Second Screen, bloopers, commentary and a Lego short (missing is an apology).

If you found out you had 24 hours to live, I’d recommend turning on Pirates of the Caribbean: On Stranger Tides; it will be the longest day of your life. 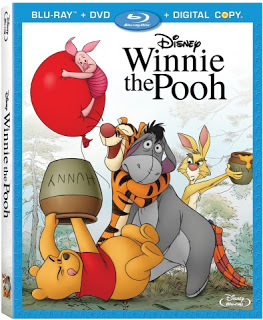 The Pitch
Disney returns to the Hundred Acre Wood with “Winnie the Pooh.” Featuring the timeless charm, wit and whimsy of the original featurettes, this all-new movie reunites audiences with the philosophical “bear of very little brain” and friends Tigger, Rabbit, Piglet, Owl, Kanga, Roo – and last, but certainly not least, Eeyore, who has lost his tail. “Ever have one of those days where you just can’t win, Eeyore?” asks Pooh. Owl sends the whole gang on a wild quest to save Christopher Robin from an imaginary culprit. It turns out to be a very busy day for a bear who simply set out to find some honey. Disney’s all-new “Winnie the Pooh” movie is inspired by three stories from A.A. Milne’s books in Disney’s classic, hand-drawn art.

The Review
Disney’s latest Winnie the Pooh film should be watched, enjoyed and cherished.  Refreshingly faithful to the previous Disney Pooh-niverse with sharp writing and beautiful animation, Winnie the Pooh is both sweet and charming and a perfect movie.  Jim Cummings once again lends his voice to both Pooh and Tigger  and the film is wonderfully narrated by John Cleese.  I particularly enjoyed hearing Craig Ferguson who gives a great performance as Owl.  The music is also great and She & Him contribute a few songs.

As the movie industry becomes more focused on reimagined franchises, it’s a tremendous accomplishment that Winnie the Pooh is fresh, faithful and indeed magical.  Highest recommendation.