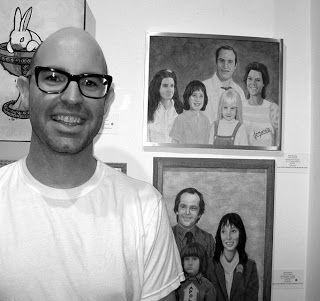 I started FOG! in it’s earliest incarnation, way back in 2004 and one of my biggest inspirations was Kirk Demarais’ Secret Fun Spot.

A casual viewer might not see much in common, but Kirk presented his site with two very important unspoken philosophies that I have always applied to my work.

Kirk’s new book, Mail-Order Mysteries: Real Stuff from Old Comic Book Ads!, is a treasure trove of everything that I wanted to buy from comic book ads growing up.  And although the actual items might not hold the potential life changing purchase as envisioned when looking at the ads, seeing many of them for the first time is equally as special.

Kirk took time out of his busy schedule to chat with FOG! about the book.

I first discovered your website, Secret Fun Spot, several years ago and thought it was amazing and it was actually an influence when I was developing my first site. Can you tell me a bit about your background?

Secret Fun Spot has been a great way for me to connect with like-minded people. Someday I hope to focus my attention on it again. I’ve neglected the site for about six years now, so it can still give first time visitors some fun but it’s way outmoded. Not only was the resolution set up for the 600 x 800 monitors of yore, but now there’s no beating Flickr when it comes to retro image galleries. I do still love to blog though so I’m hoping to somehow merge the Fun Spot and the Fun Blog eventually.

Anyway, regarding my background, I graduated with a bachelor’s degree in Psychology and then spent a few years in a dimly-lit factory learning that I desperately wanted to create for a living. I’ve always been interested in a wide variety of creative forms be it drawing, design, film, prose, music, or photography. I got my first steady creative job designing animated e-cards.  When I wasn’t on the clock I kept dabbling with stuff like web building, filmmaking, art, and freelance design.

When did you first become interested in pop culture and specifically, novelties?

My interest in pop culture must have started the first time I sat before a television set. My first trip to the toy aisle probably sealed the deal. Entertainment and toys remain two of my favorite sources of fun.

I think of novelties as sort of a sub-genre of toys, but to me they have extra appeal because they’re not just made for kids, and because they blossomed in the prosperous 1950s and 60s which is a period I’ve always been fascinated with. I also associate novelties with fun things like wacky souvenir shops, comic books, lodge meetings, basement rec rooms, dime stores, and goofy uncles, all havens for fun.

You’ve kind of become the go-to historian regarding novelty culture. How did you get involved with S.S. Adams?

As a kid I got acquainted with their products through comic book ads and gift shops. When I learned that they originated classics like the Joy Buzzer and the Snake Nut Can I became a loyal fan and collector. My collecting led me to win an ebay auction for some vintage S.S. Adams store display cards. Come payment time, I noticed that the seller’s last name was Adams and he was located in Asbury Park, New Jersey near their headquarters. It turned out to be the grandson of the founder and the owner of the company.

I became his too-many-questions-asking pen pal, and eventually he saw some of my retro-flavored design work and asked me if I’d be interested in designing for them. I ecstatically agreed and I had the honor of redesigning their packaging, catalogs, and web site. When the company celebrated its centennial anniversary I created a visual history book for them called “Life of the Party.” 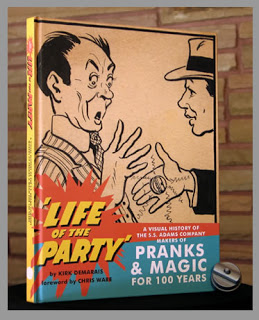 The big novelty companies were Johnson-Smith, Archie McPhee and S.S. Adams. What, in your opinion set each of these companies apart from one another?

In simple terms S.S. Adams is a manufacturer, Johnson Smith is a distributor and Archie McPhee is both. Adams and Johnson Smith both emerged in the early 1900s and they benefited greatly from one another, bringing the novelty biz to new heights.


Archie McPhee was started by Mark Phalow in the 1970s. He initially sold vintage and oddball merchandise and eventually decided to start creating his own product, thus the Accoutrements brand of novelties was born. These days they are the reigning kings of the novelty world, churning out items that use modern technology like the Yodelling Pickle as well as instant classics that could have existed decades ago like Handerpants which are fingerless gloves that look like briefs. 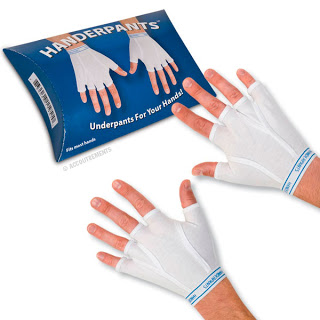 What are your five favorite novelty items and what makes them special?

1. X-Ray Spex- because they are the thing that first got me interested in all this stuff. 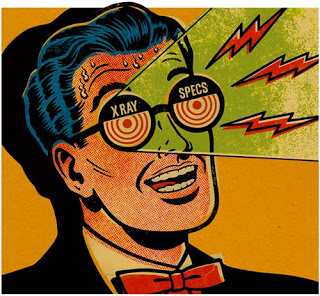 2. Johnson Smith Ventriloquist Dummies- my wife found them at a local flea market for a buck apiece and bought them just because she thought they’d be something I’d like. Little did she know that they came from comic book ads and are extremely rare. I’ve never seen a pair on sale elsewhere. 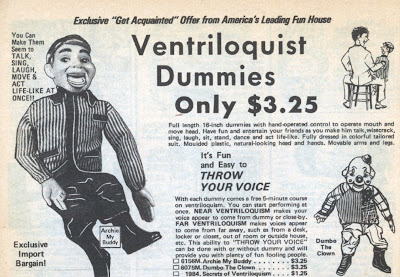 3. The Air Car Hovercraft- because it has a cool art deco design and actually hovers.

4. The “Horror Record” and “Haunting” record of spooky sounds- because even though they’ve got low production value, those old recordings are magical. 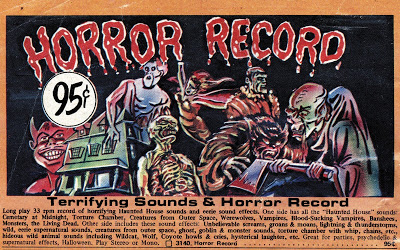 5. The Spy Pen Radio- the fact that it works and does so without batteries made me as amazed as a little kid.

You’ve also gotten a lot of attention for your contributions to the Gallery 1988 Crazy For Cult shows where you essentially create family portraits using characters from movies. What was the inspiration from them and have any of the subjects seen the work?

When I found out that Gallery 1988’s Crazy 4 Cult art show was an annual event, I decided that I wanted to at least try to submit something even though I’d never shown in a gallery before and was quite rusty when it came to “fine art.” I spent days pondering a concept that would stand out. During my brainstorm my wife reminded me of an unusual family portrait we had just seen for sale, and my mind instantly envisioned Olan Mills style portraits of the families from “Fargo” and “The Shining,” two of my favorite films. That was in 2008 and since then I’ve made almost twenty of them. 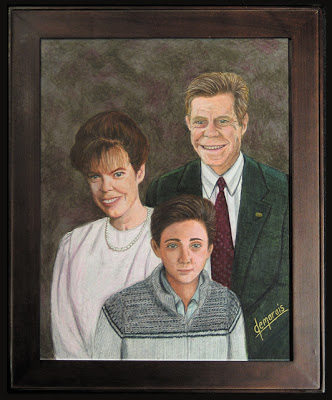 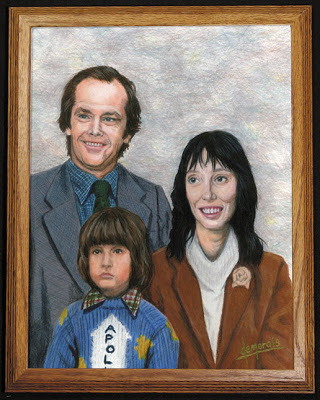 Quite a few of the subjects have seen my work. I did a portrait for a producer of the movie “Observe and Report” and I know that he showed it to the cast and crew and from what he said, they got a kick out of it. “Little Miss Sunshine” was also done for one of the producers so I know it got passed around. Seth Gordon, the director of “King Of Kong: Fistfull of Quarters,” owns the one I did based on it. The comedy troupe Human Giant saw the piece I did of them, and I could go on. 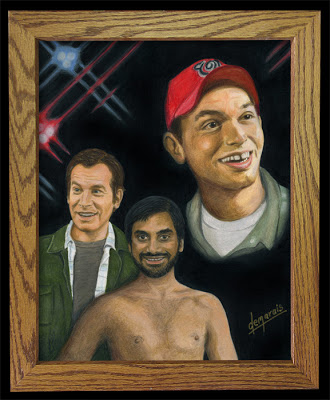 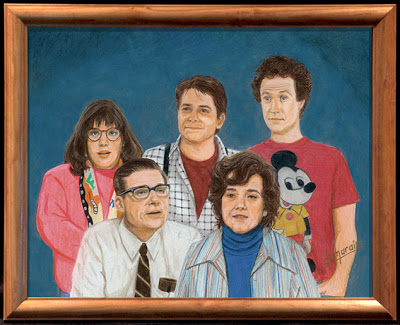 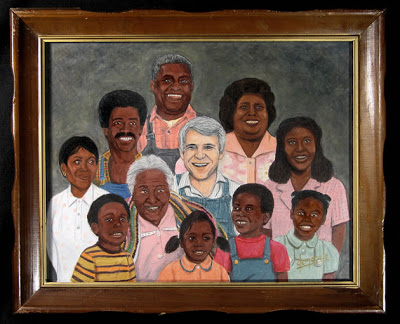 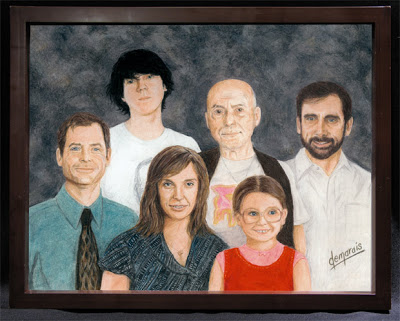 Knowing that it’s possible for the actors to see themselves in my stuff can be nerve-wracking while I’m drawing them, but I also think it’s amazing that I get to provide a moment of entertainment to these people who have entertained me for so long.

You’ve worked for the Hallmark inspirational subsidiary DaySpring. Are you religious and have you tried to apply your aesthetic to their products?

I am indeed a guy of Christian faith so making animated e-cards for DaySpring held a lot of meaning for me. I love that the e-cards are totally free, providing a service for anyone with Internet access. I love knowing that people use them to encourage, cheer up, or console each other. It’s a real honor to play some part in those human connections.

I had a lot of creative freedom there and I did do a number of projects that were heavily influenced by my personal style and humor. But I tried not to go overboard since it doesn’t appeal to everyone.

I usually sought out successful paper cards and translated them into ecards since it was already known that those are what the customers wanted.

Your book, Mail-Order Mysteries: Real Stuff from Old Comic Book Ads! is phenomenal and I found it reminiscent of some of Chip Kidd’s books. You are primarily self taught. Who or what are your biggest inspirations in terms of your design sensibility? 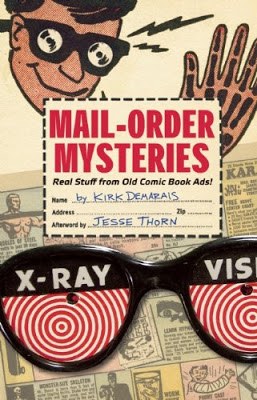 You just named a big one. Chip Kidd’s book “Batman Collected” is my all time favorite book of collectibles. In addition to bringing me great pleasure, it served as a major influence on my first book, “Life of the Party”.

Not only that, it changed my perception of collectibles in general. Most books of that kind strive to gather perfect, pristine examples, but Chip often features objects that have been well-played with. The amazing photography by Geoff Spear make imperfections like chipped paint, or water stains become part of the toy’s beauty, and that gives the items their own story which adds value to each piece. 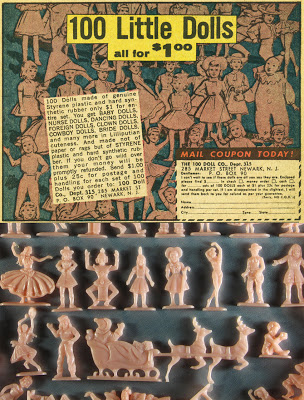 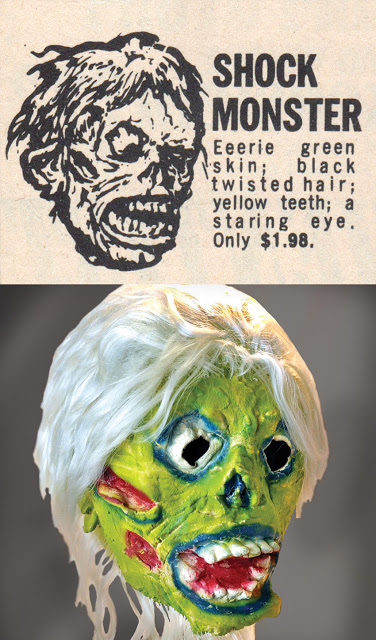 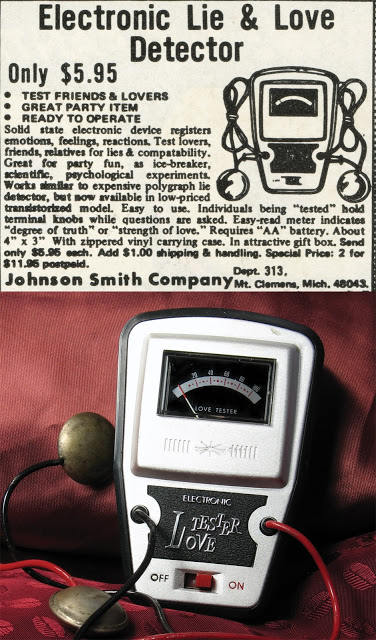 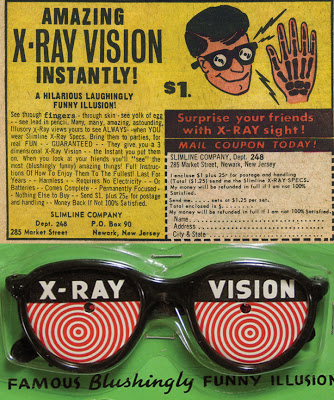 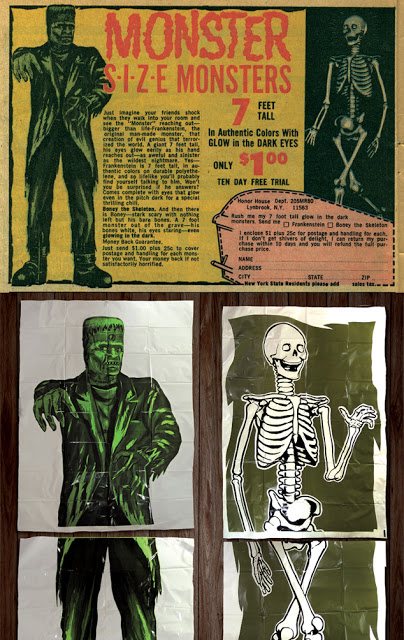 So I’m no longer such a stickler about condition and I’m more likely to remove stuff from its package and enjoy it because of Chip’s approach. 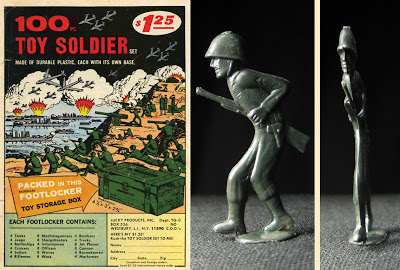 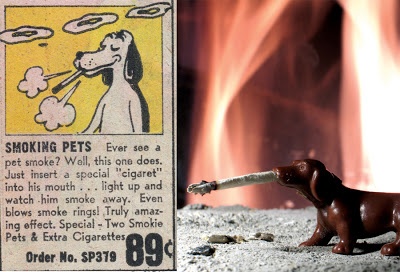 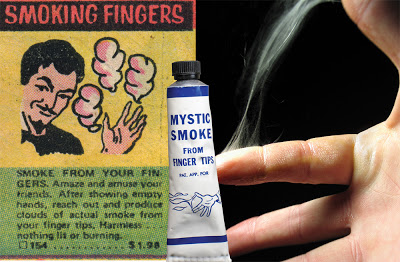 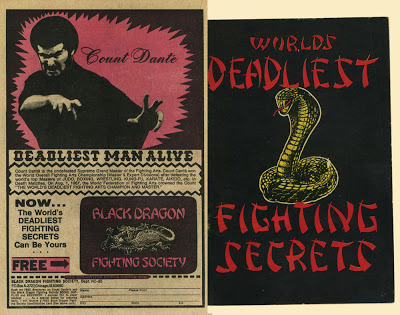 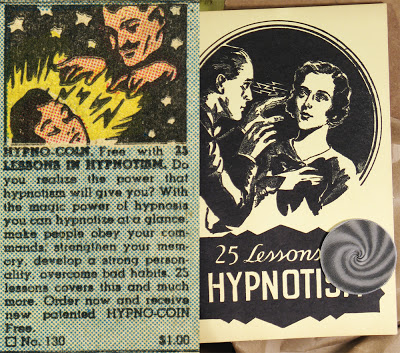 I also love the work of the Charles Spencer Anderson design firm. They are heavily influenced by vintage images, but they’re able to work them into something fresh and amazing.

I’m currently creating more fictitious family portraits for a two-man art show at Gallery 1988 in May 2012. Prior to this they’ve all been from films but this time I’m going to cover some of my favorite television families too.

Some of my biggest weekly laughs come from the WFMU radio show/podcast called “The Best Show” with Tom Scharpling.

Thanks to Netflix Watch Instant I’ve been devouring not-so-new shows like “Breaking Bad” and “Pawn Stars” and I’m so excited that “How It’s Made” is now on there. I also just discovered the Syfy channel’s “Scare Tactics,” and I can’t believe that it’s a real show and that it took me this long to hear about it. I also recently enjoyed “Dumbstruck,” a documentary about ventriloquists.

Comics-wise I’ve been rereading Chris Ware’s masterpiece, “Jimmy Corrigan, the Smartest Kid on Earth,” and I’m still finding new discoveries in it, even though it’s my umpteenth time.

I save money by staying about two years behind on video games so I’m just now playing through games like “Ghostbusters, Prototype, and Bioshock 2.” I know it’s passé, but I still spend a lot of time honing my fake guitar skills on games from the “Rock Band” and “Guitar Hero” series.

Music-wise I’ve been wearing out “Happy Up Here” by Röyksopp and “Pop Cuture” by Maedon.

If you could have a dinner party with six fictional characters who would you invite and what would you serve?

I’d invite Pee-Wee Herman, Hugo the Man of a Thousand Faces, Navin Johnson, Mr. Peanut, George F. Babbitt and Lak Sivrak, the werewolf in the Star Wars cantina scene who was digitally painted out in the special editions. We would eat at the Casa Bonita in Denver, Colorado.