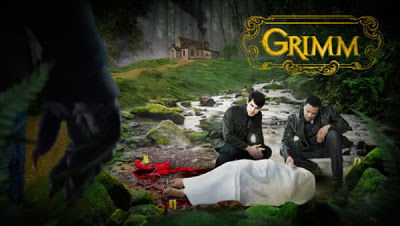 The names David Greenwalt and Jim Kouf should put a smile on the faces of any fan of genre television.

Greenwalt’s credits include Buffy The Vampire Slayer, Jake 2.0, The Commish, The X-Files, Profit, Angela, Eureka and Moonlight, while Kouf’s name has been on Angel, Stakeout, The Hidden, Rush Hour, The Ghost Whisperer and National Treasure.

The friends first collaborated together in 1985 on the film Secret Admirer, and tonight, their latest project, Grimm debuts on NBC.

I had the opportunity to screen the Grimm pilot, which was not only a very interesting take on the material (and one quite different from the similarly themed Once Upon A Time), but also sets up an intriguing number of possibilities (Steve Ahlquist will be publishing a thorough look next week).

I had the great opportunity to speak with David and Jim, who were able to answer a few of my questions regarding the series.

What are the challenges and joys of creating a series mythology that’s based on a Fairy Tale mythology?

David Greenwalt: And the challenges are what is happening in each episode that is a crime that could occur in our real world. And it also has some kind of Grimm meaning to it that they do in their world. And that’s a challenge because you have to have a couple of stories for every story.

You’ve mentioned reading Bruno Bettelheim’s The Uses of Enchantment.  What other academic resources, if any, have you guy’s referenced? Did you go into this as “let’s examine the source material” or “let’s look at other examinations of Fairy Tales before we delve into this?

David Greenwalt: Well, I can tell you the tremendous amount of books that we’ve read and we have on our shelves. But that would be showing off. And mostly, we come at it from the inside of the stories. You know, we either find a crime that we think could be turned into a fractured fairytale or vice versa. And we actually try to tell it from inside the stories as opposed to applying academic things from outside the stories because that doesn’t really help us with the essential cores of the stories.


Will we see events repeating? Like, for instance, if you take a story like say the Three Bears or any of Grimm story, can we occasionally see these as the equivalent of a serial killer? Like these things have happened before and they were killing patterns?

David Greenwalt: Yes. But they’ll take place in the here and now. And families who’ve dealt with this stuff, sometimes, you know you have a third generation bear or wolf or something that’s been civilized. You know, but there may still be elements in that person’s family of wanting to go out and hunt. And that’s, you know could be a conflict in the family just like in America how immigrants come here and try to become American but they still have their past.

Do the Grimm Fairy Tales as such exist in the world of the show? Like for instance, do people think of them as fiction or is it completely absorbed into the reality of the series?

Jim Kouf: I don’t think the characters when they’re going – solving their crimes reference the Grimm fairytales when they’re solving the crimes because it’s an actual crime for them to deal with. So they’re not going, you know, gee this is just like Goldielocks and the Three Bears.

But for instance, the lead character, Nick Burckhardt, is now aware that he’s a Grimm. Do the Grimm Fairy Tales exist as such in his reality?

Jim Kouf: Yes. Well, the Grimm books that he has are the original stories that were handed down from the Grimm brothers and passed on and added to by generations of Grimms. So there more like profiles, criminal behavior and creatures. So that’s what he’s got. He’s got ancient book to refer – to reference.

David Greenwalt: So that’s the real search material. But you question, yes, the Grimm Fairy Tales, that book does exist in the world of our show. That could be on a shelf somewhere. But what he’s using is very specific profiling source material that’s been handed down to him through his family.