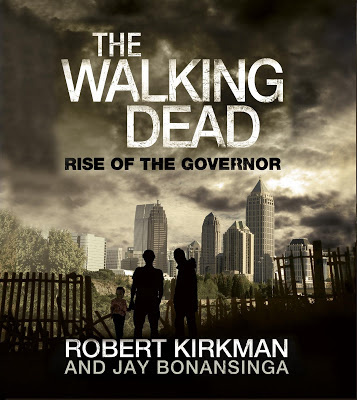 Fans of The Walking Dead will celebrate Sunday with the premiere of the it’s second season on AMC.

As the first season deviated from the comic series, it’ll be interesting to see how certain characters will be integrated.  Creator Robert Kirkman’s cast is vast and the mythology dense, which is why fans might be ecstatic to learn that the first in a series of The Walking Dead novels and audio books was released this week.

Kirkman has teamed with writer Jay Bonasinga to flesh out the universe and the first volume focuses on the origins one of the comic series big bad guys, The Governor.

Our friends at MacMillan Audio have given us a clip of the new book to tease you Walking Dead-heads and it might be the perfect listening material on a crisp, fall evening.

“If the comic book writer Robert Kirkman were a superhero, his name might be the Midas Touch.” – The New York Times
THE WALKING DEAD
RISE OF THE GOVERNOR
By Robert Kirkman and Jay Bonansinga
Read by Fred Berman
FIRST CAME THE GROUNDBREAKING AND BESTSELLING COMIC BOOK SERIES…
THEN CAME THE RECORD-BREAKING AMC TELEVISION SHOW…
NOW COMES THE FIRST IN A SERIES OF NOVELS EXPLORING THE ORIGINS OF FAN FAVORITE CHARACTERS FROM THE WALKING DEAD UNIVERSE!
In the Walking Dead universe, there is no greater villain than The Governor. The despot who runs the walled-off town of Woodbury, he has his own sick sense of justice, whether it’s forcing prisoners to battle zombies in an arena for the townspeople’s amusement or chopping off the appendages of those who cross him. The Governor was voted “Villain of the Year” by Wizard magazine the year he debuted, and his story arc was the most controversial in the history of the Walking Dead comic book series.
Now, for the first time, fans of The Walking Dead will discover how The Governor became the man he is, and what drove him to such extremes.
This is the story of Philip Blake, his daughter, Penny, and his brother Brian. Along with two of Philip’s friends, this ragtag group of survivors attempts to make it to Atlanta as the zombie apocalypse rages around them. But as their journey becomes more and more dangerous, Philip will realize that he must do whatever it takes to save his friends and family… and his own soul in the process.
Narrated by four-time winner of the Audiofile Earphone Award Fred Berman, all of your favorite characters in the Walking Dead universe are brought to life along with the fear, adventure, and excitement that the story conveys.
About the Authors:
Robert Kirkman is a best known for his work on The Walking Dead and Invincible for Image Comics and SKYBOUND. He is one of the five partners of Image Comics and is an executive producer and writer on AMC’s hit television series The Walking Dead.
Jay Bonansinga is a critically acclaimed horror novelist whose works include Perfect Victim, Shattered, Twisted, and Frozen. His debut novel, The Black Mariah, was a finalist for a Bram Stoker Award.