One of the great things about having a birthday two weeks before Halloween is my lifetime association of spooky things as reward.

Right around the time that people start decorating their houses with ghosts, spiders and skeletons, I get presents. It’s a Pavlovian experiment that I happen to love.

One of first records I ever bought with my own money was Alice Cooper’s Welcome to My Nightmare, which took about three years of convincing my parents to let me buy, and it was only after he appeared on The Muppet Show that my mother relented. Somehow he was more sinister to her than was KISS. Perhaps it was the fact that I had to wait more than a third of my life at the time to obtain it, but that record still holds almost mystical value for me. 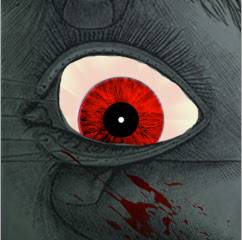 Last week Alice released a sequel to his masterpiece, and today I received this:

Thomas Negovan, proprietor of Century Guild (which many geeks may know from their incredible booth at Comicon), sent me a video kickstart invitation to participate in his incredible, haunting wax-cylinder recording of Welcome to My Nightmare.

About this project:
A SPECIAL THIRTEEN-DAY HALLOWEEN PLEDGE DRIVE!

Thomas Negovan’s process of recording on wax cylinder- and releasing on the same medium- has been absent from the face of the planet since 1914. His last wax cylinder recording project led to an invitation to speak at a TEDx conference on 11.11.11. As gallery director for Century Guild Thomas speaks regularly on French and German Cabaret from the 1880s-1920s and hosts an annual Grand-Guignol themed art exhibition featuring contemporary artists alongside historical artworks from the period.

Because Halloween is unquestionably the finest of all the holidays, a special recording of Macabre Madness… “Welcome To My Nightmare”!

His first record (due out in mere weeks!) was recorded entirely without electricity onto wax cylinder, using an old Thomas Edison machine from the late 19th century. Thomas wasn’t ready to quite give up on the wax cylinder ghost, and was looking for an old 1920s song to record for Halloween…

Negovan decided to interpret an Alice Cooper song in a blues style that captures the descent into madness that the lyrics and chords of the song illustrate; beautiful minor ninth chords on an old 12-string. It was recorded at 3 in the morning and Tom completely lost himself in the lyrics. Hopefully whether Alice Cooper fans like it or not, they will find it at least a little bit disturbing…

The 10″ vinyl record (the size of old 78 rpm records!) is a unique “glow-in-the-dark” eyeball design… a “double-a side” with the flip side being an alternate recording of a song from Negovan’s first record called The Divine Eye. (A silkscreen poster for the song was made by Italian poster collective Malleus.) They’re pressing only 666 copies of the record, and putting them in a sleeve with a hand-silkscreened insert cover depicting an eyeball opening in terror in a Grand-Guignol style. There’s also a special edition of only THIRTEEN copies on black vinyl with an original cover painted by Gail Potocki!

And best of all (in grand, steampunk fashion), they are releasing this single on the magnificent medium of Wax Cylinder, but with a special twist… it GLOWS IN THE DARK. See the photos, and the video, and be either horrified, amazed… or some beautiful combination of both!!! 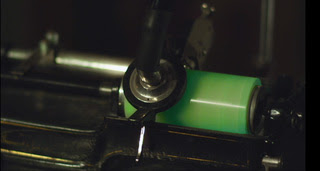 Creating extremely unique glow-in-the-dark vinyl records, pressing on an outdated medium like wax cylinder, all the hand-work that goes into making these really special… NONE of this is inexpensive. This art project will cost well over $6,000; $1,000 alone is for hand-molding the cylinders one at a time. (There’s only one person on the planet who still knows how to do this.) They’re setting the pledge drive at $666, but they’re not recouping anything for their own blood, sweat and tears until they raise ten times that. If by some mad luck they DO reach that amount, Century Guild has pledged to making sure that everyone gets an extra copy of the record or something (specific details postponed until closer to deadline, but it’ll be special!) equally cool.

Artwork for the wax cylinders below, showing what black cylinders look like in their cases. They’re even stamped with debossed text on the ends like the 19th century cylinders! The text on the glow cylinders will be black. 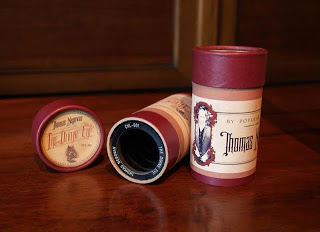 I, for one, am a fan of keeping this archaic technology alive, which can’t be done without our support (yours, mine, everybondy’s)!