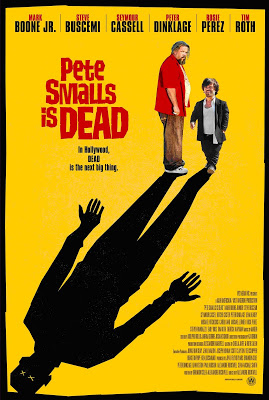 After making a splash with 1992’s In The Soup and directing one quarter of 1995’s Four Rooms with his fellow hot indie auteurs, director Alexandre Rockwell has virtually disappeared from filmmaking.

That’s not entirely true, as he’s made two other films with a somewhat regular acting ensemble which includes Steve Buscemi, Rosie Perez, Elizabeth Bracco, David Proval and Sam Rockwell.  But, this incredibly talented writer/director has been fairly low key until this release, which premieres today in limited theatrical release in Los Angeles and is currently available On Demand.

Unfortunately, it seems that Rockwell’s greatest asset has become that he has some talented friends acting in his films.  Pete Smalls Is Dead is a disappointment if only because it really doesn’t know what it is.  Set in the seedy underbelly of Los Angeles (seemingly meant to invoke Altman’s take on Chandler, The Long Goodbye), the film focuses on a number of even seedier characters who are all connected via their schlock-meister mutual friend, the deceased Pete Smalls.

But, as we learn early on, Pete Smalls is not dead, and much of the film is dedicated to a number of random plot threads that never come together into anything coherent.  In many ways, Rockwell’s film represents an unintentional parody of nineties independent films, but unfortunately, that was almost twenty years ago.

Often the film feels like a group of friends got together to make a movie and have a good time.  For the audience, it’s the equivalent of looking at someone else’s vacation photos.