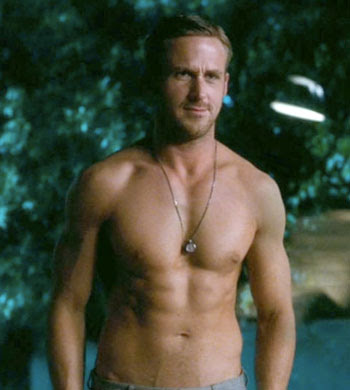 I’m not the type of woman that gets all foamy for movie stars. Yes, there have been exceptions (mainly for Nathan Fillion but every once in a while a little bit of Christian Bale will slip in) but for some reason my pants seem to vibrate for Ryan Gosling.

It all started on the film Murder By Numbers and pushed through Lars and the Real Girl until it was fully-formed into a mountainous crush during the flick Blue Valentine which left me heaving and wanting more Gosling.

Then he did something that made me weak in the knees, he stopped a fight in the real world and for reasons unknown I will forever be his.

Maybe I’m just weak because he looks tasty or maybe I want to bend him over my office desk because I’m thirty-seven and am going into the first waves of menopausal mania, who knows, but whatever it is about him that makes my nether region go into meltdown is worth it because, Damn, that boy sure does have a pretty mouth.

Anyway, to sum up this diatribe of Gosling love, the following video best sums up his appeal to women like me.

And by women like me I mean totally awesome chicks that can put their legs over their heads (in case he happens to be reading this).

In this article:Celebrity/Gossip, Watch This