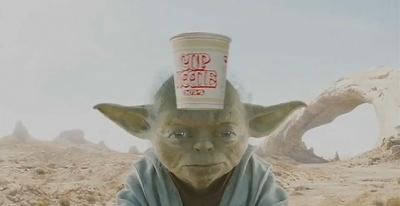 You know times are tough for an internationally recognized Jedi master when he starts pandering poor college kid food to a Japanese audience while using his incredible powers to boil water in a kettle instead of fighting Sith Lords.

But what’s a guy to do when the mortgage on his mud hut in Dagobah is up and he’s all out of coin?

While I don’t belittle his monetary need, I do wish the Japanese could have used him in a more dignified manner, say as a watch spokesman, but what do I know? Maybe Cup Noodle is a delicacy and Yoda is making a million bucks just lifting a kettle with his mind.

But one comment, perhaps, after all that Japan has been through with the whole radiation leakage problem, maybe the catch phrase “Boil Japan” isn’t a good one.

Commercial after the break.

Source: Look at This Frakking Geekster