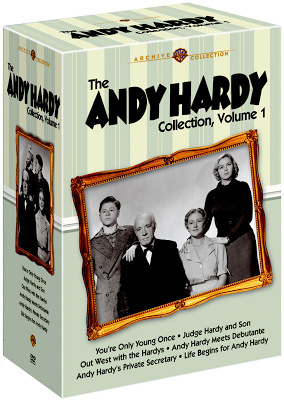 Andy Hardy, the original teen supreme, comes careening to your screen in the first of a series of collections! MGM’s 1937 adaptation of Aurania Rouverol’s play Skidding, A Family Affair, proved such a stunning success that production commenced on a series inspired by it almost immediately.

Carrying over three of A Family Affair’s cast members (Mickey Rooney as Andy Hardy, Cecilia Parker as sister Marian, and Sara Haden as Aunt Milly), the Hardy series was launched in 1937 with You’re Only Young Once and the addition of Lewis Stone (Judge Hardy), Fay Holden (Mrs. Hardy) and Ann Rutherford (Polly Benedict). It was not long before Rooney’s boundless energy and talent stole the show (and the hearts of teenage girls all over the USA), and Andy Hardy took over the series. Not that anyone minded!

This collection features a sextet of sensational picks from the Hardy series, none of which have ever been available on DVD, some not available in any format. Each film comes packaged in its own DVD case, complete with artwork based on the original posters. Each film has either been newly remastered, or digitally upgraded from a recent progressive master source, specifically for this new DVD release. All best-available film elements have been used in the creation of this collection, and athough none of these films have been ‘fully restored’, the result is a distinct improvement in quality for each picture, and the first new work done to any of these films in over 20 years.

These films are charming and really are a must see.  In terms of tone, the popular comic Archie was actually inspired by the Andy Hardy series.

After the jump, find out more about each of the films as well as check out some clips and trailers.


You’re Only Young Once (1937)
On vacation with his family on California’s Catalina Island, Andy Hardy falls head over swim fins for a sophisticated young beauty (Eleanor Lynn). Judge Hardy warns his son that she is too fast for him.

Out West with the Hardys (1938)
The Hardys out west! While Judge Hardy gets into a legal wrangle to save an old friend’s ranch, Andy tries to turn a bronco into a jalopy and Marian tries to lasso herself a cowpoke.

Andy Hardy Meets Debutante (1940)
When Andy falls for the picture of a glamorous debutante (Diana Lewis) he tags along with Judge Hardy’s crusade to save a NYC orphanage in hopes of meeting her. Lucky for Andy he has gal pal Betsy Booth (Judy Garland) around to help out.

Andy Hardy’s Private Secretary (1941)
All set to graduate from high school and Andy flunks his English exam – in spite of the fact that the Judge has gone to all the trouble of getting him his very own private secretary (captivating Kathryn Grayson in her screen debut).

Life Begins for Andy Hardy (1941)
After graduating from high school, Andy heads for New York, giddy with visions of high finance, chic women and posh nightclubs. But the big city is tough on a small-town boy. With Judy Garland in her final appearance as Betsy Booth.

This amazing boxset is available now and really makes a wonderful holiday gift. Click here to listen to Mickey Rooney discuss the series.