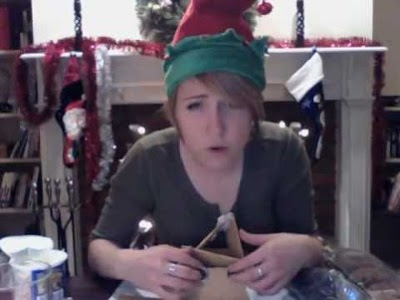 One of my favorite women in the world is Hannah Hart, the woman behind the My Drunk Kitchen videos on YouTube, who, if we were ever able to meet in person, would probably be allowed into my inner sanctum of friends (which is something I closed years ago because I can not be bothered to try and woo people into liking me anymore) simply because she knows her way around a bottle and won’t make fun of me when I pass out on the toilet like other people do (I have a feeling she’s been there).

Anywho, Hannah has released a lovely How-to video about making a gingerbread house (which really is something stupid to do in the first place..Hey! let’s create a delicious food-thing and then leave it sitting out for a month and not eat it…sounds great to me!) and, like her previous outings, Ms Hart does her food crafting while drinking an arsenal full of eggnog.

Let’s just say her creation ends up looking more like a shanty than an actual house and will probably be easier to build than the four-story historic mansion that Martha Stewart concocts in her sleep.

So pour yourself some highly-spiked Nog and watch the video after the break.

You’ll be glad that you did.