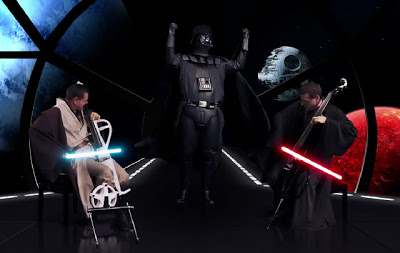 My mom’s biggest regret in life (other than having a daughter who won’t call her back in a timely manner) is never having learned to play the cello.

Growing up she used to tell me how much she wanted a cello but was given a violin instead and how much it pained her (which is ironic because all I wanted to play was the sax but was forced to play the flute because my mom didn’t want to hear me squawk on the alto all day).

I never really gave her sadness much thought until I watched the following video of a guy dueling himself cello style while playing iconic music from Star Wars and then it hit me, if my mother had learned the cello there might have been a very good chance she would have played me the Star Wars theme song every night before I went to sleep, thus changing the course of my life significantly and making me into a better person.

Damn it all to hell.

In this article:Music Video, Star Wars