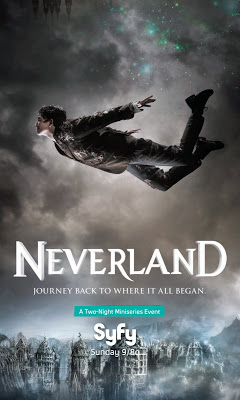 This Sunday, December 4th and Monday, December 5th at 9/8c, Syfy is proud to present an Original Movie Event with the premiere of Neveraland.

Neverland introduces us to a young lad named Peter and his streetwise gang, who are mysteriously transported from turn-of-the-century London into an enchanting parallel world where time stands still and an adventure awaits like nothing you’ve ever seen before. In Neverland, no one ever ages and lost souls have been plucked out of time. The lost boys are soon caught in a war with the man who will become Captain Hook and change the fate of this mystical land forever.

FOG! had the opportunity to briefly chat with Neverland writer/ director, Nick Willing, who is no stranger to the genre after his previous two mini-series, Alice and Tin Man.

FOG! You’ve reimaged both Alice in Wonderland and the Wizard of Oz with Tin Man, and now with Neverland you’re adding to the mythology of Peter Pan. Do you have a preference for recreating or reimagining these stories or a project like Neverland where you are adding to the established story and fleshing it out more?

Nick Willing: Well they’re all very different – similar but actually for me.  The Tin Man which was the Wizard of Oz was more a kind of reimagining of that world in a modern setting. Alice was me going crazy and creating my own story around what I imagined Wonderland would be like today 150 years old.

While this is the first time I’ve really tried to do a more traditional prequel to a fantasy story that is – could be plausible – a plausible part of the mythology of Peter Pan. And so it was – they were all daunting because they’re all incredibly revered stories.

But one of the things I think people appreciate is that if you keep that story alive, keep reinventing, keep trying something new, keep making up your own stories around that famous story, then you always go back to the famous story itself and you keep that something that we all treasure alive for longer. That’s kind of how I see it.

Are there any other classic stories you’d want to adapt or would you have any interest in – assuming that Neverland does great, would you want to actually do Peter Pan proper with this cast?

I don’t think I’d go back to Peter Pan because I don’t know that I could find – you know, I don’t know. I mean I don’t think so. But there are other stories that I’d love to explore – other worlds.

I mean you’re talking to a guy that actually lives in a fantasy world. In my case, I live in many fantasy worlds. I live in Neverland, Oz, Wonderland. So for me it’s an intense and vicious pleasure and the longer I can live in the fantasy world, the better for me.

After the jump, check out the official full length trailer for Neverland!