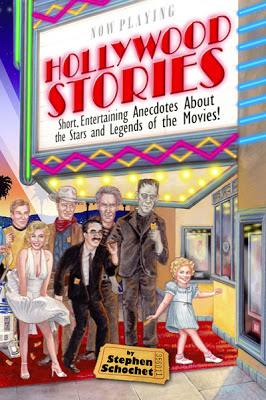 Author Stephen Schochet is a professional tour guide in Hollywood who years ago began collecting little-known, humorous anecdotes to tell to his customers. His new book Hollywood Stories: Short, Entertaining Anecdotes About the Stars and Legends of the Movies! contains a timeless treasure trove of colorful vignettes featuring an amazing all-star cast of icons including John Wayne, Charlie Chaplin, Walt Disney, Jack Nicholson, Johnny Depp, Shirley Temple, Marilyn Monroe, Marlon Brando, Errol Flynn, and many others both past and contemporary.

I loved the book, as it’s filled with dozens of great stories of Hollywood, many of them unbelievable and all of them entertaining.  If you are a fan of celebrity gossip, this book is a must have.  Stephen took some time out of his busy schedule to chat about his work as a tour guide, how it led to the book and share some of his favorite stories.

Tell me about you and your interest in Hollywood?

I’m a tour guide in Hollywood and years ago I started collecting little stories to tell the customers and had the idea that the tales could be told anywhere.

I had always been interested in the movies and history so it was kind of a natural fit for me. When I first started I had a study buddy named Ivan. During our breaks we would research information about old Hollywood and share it with each other. I remember one time we met on Hollywood Boulevard and said to me in a low, conspiratorial tone, “Steve, man, you what I found out today? That Thomas Edison owned the rights to the movie camera and the early moguls like Mayer, Warner, and Zukor they had to pay him tributes. They why they left the East Coast and came west — they were outlaws, baby!”

The more information we found out, the more fun it was to give the tour. And I’ve got a good memory for stories so having different material kept it fresh, I think for the customers as well. Anyway, eventually I had the idea that these very short anecdotes could be told anywhere and that’s what led, after a few other projects, to the idea for the book.

Have you met any of the famous people that you talk about in your book?

Fred Hayman’s boutique on Rodeo Drive was a great store (now defunct) where I used to be able get my customers cappuccinos spiked with Kalhua and brandy — I’ll tell you the more people drank the more they enjoyed the tour.

A bunch of stars came in there, like Cybil Shepard, Suzanne Pleshette, Vanna White, the one who I really enjoyed meeting was Zsa Zsa Gabor who took pictures with all my customers. The bartender was a beautiful girl named Laura, she looked like Cindy Crawford. Zsa Zsa walked to the bar, complimented Laura and asked how she kept her skin so nice. Before Laura could answer Zsa Zsa suggested that Laura stay away from booze — then asked her to put some extra brandy in the cappuccino. Then she laughed so she had a good sense of humor.

You also wrote a bit about Jack Nicholson and Marlon Brando being neighbors.

They were next-door neighbors and sometimes Jack would be puttering around in his garden and he would hear this disembodied voice coming over the fence and they would conversations like Tim Allen and his neighbor in Home Improvement. 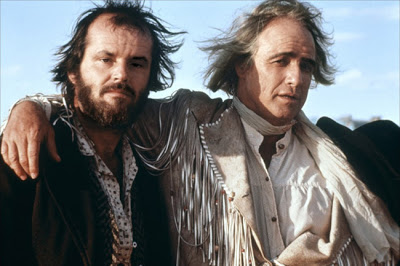 Previously they worked together in the movie The Missouri Breaks. Jack had been looking forward to it, I think at that time Brando and Lawrence Olivier were the two actors everybody wanted to work with, but Marlon by that time was really lazy and never bothered to learn his lines. He’d always be reading cue cards and wouldn’t Jack in the eye in their scenes together.

Finally, Jack got frustrated and asked Marlon to stop doing it so Brando then placed an assistant in his trailer with a radio transmitter who would read the script, which Brando would hear through an earpiece. Unfortunately, the radio transmitter inadvertently picked up police broadcasts. One day Marlon was doing a scene, suddenly looked startled, came out of character and said,” Oh my God! There’s been a robbery at Woolworths!”

You also wrote about an incident at the Psycho house at Universal.

It’s the first story in my book.

In 1999, an Australian gentleman told me about an interesting experience he and his family had at Universal Studios.

They were on the backlot tour passing one of the theme park’s main attractions, the Bates Motel used in the 1960 horror classic Psycho. 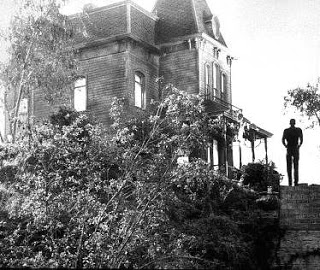 As the guide gave out information about how director Alfred Hitchcock shot the picture, a tall man, dressed in drag and carrying a large knife, emerged from behind the old set and charged toward the tram. The narrator seemed to know nothing about the Norman Bates look-alike and clammed up completely. The make-believe killer wore such a convincing maniacal expression that some of the paying customers were frightened and screamed when he raised his weapon.

Then the “fiend” pulled off his wig and he turned out to be comic Jim Carrey; the thirty-seven-year-old star was clowning around during a work break. After his laughing “victims” calmed down, Jim was happy to pose for pictures and sign autographs.

I also found your chapter on Disney to be fascinating and charming.  Especially the story about his daughters.

Walt Disney’s two daughters, Sharon and Diane, grew up sheltered from the limelight.

The children had no images of Mickey Mouse around their home. Their father didn’t go to many parties, preferring to stay in after a long day of work.

Sometimes he would playfully chase the youngsters upstairs, cackling like the evil peddler woman in Snow White. When they behaved badly, Walt would admonish them with a raised eyebrow; his stern demeanor inspired the character of the wise old owl, in the 1942 animated feature Bambi. As toddlers, the brainy Diane and beautiful Sharon stayed blissfully unaware that their parents worried about them being kidnapped and allowed no pictures of the sisters to be publicly circulated.

Once in 1939, a curious classmate questioned six-year-old Diane about her family. She went home and said, “Daddy, you never told me you were that Walt Disney,” and asked him for an autograph.


There were also a number of true incidents in Los Angeles that affected pop culture like, Chief Parker of the Los Angeles Police Department.

Chief William Parker took over the force in 1950.

If people saw the movie Changeling with Angelina Jolie, they know that the LAPD had a corrupt reputation and Parker instituted a lot of reforms, which earned the public’s respect.

Parker was hard to get know; his personality, was considered to be both logical and taciturn.

Star Trek creator Gene Roddenberry was a former police Sergeant who served under Chief Parker, he wrote speeches for him, really respected him and largely modeled the character of Mr. Spock after him.

Focusing on classic Hollywood, what was the backstory of the casting of Gentleman Prefer Blondes?

Twentieth Century Fox head honcho Darryl Zanuck told Hawks to forget it; Russell was unavailable. The filmmaker asked the mogul if he could borrow his phone.

Fourteen years earlier, Howard had discovered the eighteen-year-old buxom brunette Russell working in a dentist’s office, making ten dollars a week. When he reached Jane at home, the loyal actress immediately agreed to do the picture then asked, “Do you think I could get fifty thousand?”

The conversation continued for another few minutes, then Howard put his hand over the receiver and said excitedly to Zanuck, “Great news. I got her down to two hundred thousand.”

Darryl agreed to pay Russell’s fee, and the comic pairing of Monroe and Russell onscreen proved to be priceless. 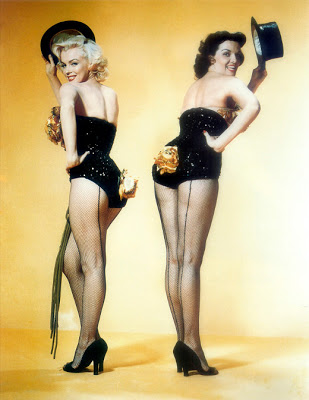 Another famous blonde, Veronica Lake, had a reputation for turning in great performances but being difficult, is that correct?

That’s right, she did.

Rising star Veronica Lake continued her pattern of infuriating co-workers at Paramount Studios on the set of the 1941 film Sullivan’s Travels.

The blonde actress, famed for her “peekaboo” hairstyle that covered her face, was constantly late and did not bother to learn her lines. Her resentful leading man Joel McCrea was forced to do tons of retakes in their scenes together. The twenty-two-year-old also lied to writer/director Preston Sturges about not being pregnant; he had to restrain himself from hitting Veronica when she confessed the truth. 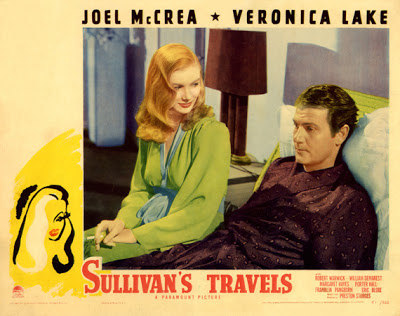 A tramp’s outfit and careful camera angles hid her growing belly. The completed movie about a filmmaker who lives like a hobo was a challenge for the Paramount marketing people; they decided to make Lake the main selling point.

Unaware of her antics, cinemagoers were once again drawn to Veronica’s sexy screen presence and she was praised for her fine performance.

Do you have any new stories that aren’t in the book?

I’m always looking for new stories. When I was writing Hollywood Stories I had to pick a stop date, October 31, 2009 otherwise I never would have finished it!

Recently I was listening to an interview with Adam West and he told a story I really enjoyed. On the old Batman TV show Bruce Wayne (Adam West) and Dick Grayson (Burt Ward) would slide down the bat poles about 15 feet and land on mattresses. Later they would be filmed coming down into the Batcave in their full costumes and the two shots were put together.

One time West yelled,” To the bat poles” and did his famous slide only to be startled when he landed on a sleeping wino. 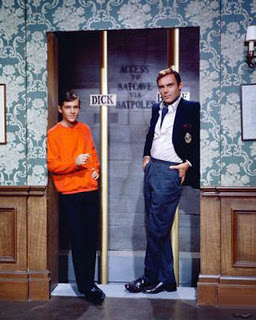 For more details, visit the official Hollywood Stories: Short, Entertaining Anecdotes About the Stars and Legends of the Movies! site!

In this article:Books/Literature, Celebrity/Gossip, Interview