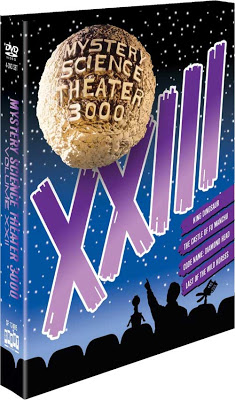 MYSTERY SCIENCE THEATER 3000: XXIII
FEATURING KING DINOSAUR, THE CASTLE OF FU MANCHU,
CODE NAME: DIAMOND HEAD, AND LAST OF THE WILD HORSES
FIRST TIME ON DVD
IN STORES FROM SHOUT! FACTORY MARCH 27
On March 27, Shout! Factory will launch into orbit Mystery Science Theater 3000: XXIII, a 4-Disc collection of four Mystery Science Theater 3000 episodes previously unreleased on DVD. Featuring the episodes King Dinosaur, The Castle Of Fu Manchu, Code Name: Diamond Head, and Last Of The Wild Horses, Mystery Science Theater 3000: XXIII also features a MSTie-riffic collection of bonus features!
MST3K XXIII is now available for pre-order on Amazon.
Much like the country that spawned it, Mystery Science Theater 3000 is a melting pot. In every imaginable genre, Joel, Mike and their robot pals Tom Servo and Crow T. Robot have seen the promise of cinema mutilated by mediocrity. Nowhere is this highfalutin concept more hilariously exemplified than in this 23rd collection of episodes from the beloved cult comedy television series. You want a Western? It’s here. Space adventure? Look no further. We’ll even throw in a failed TV pilot and a barely coherent science fiction-horror-thriller. All genres are treated with equal disrespect by the luckless crew of the Satellite of Love. They pledge allegiance only to funny, with justice — SoL style — for all.
In King Dinosaur, two scientist couples are sent to investigate a mysterious new planet and are menaced by snakes, gators, giant bugs and other scary process shots. In the world of MST3K fodder, this unique collaboration between ultra-prolific suppliers Robert L. Lippert and Bert I. Gordon deserves a moment of silence. Truth is, 63 moments of silence might be more entertaining than King Dinosaur, but those intrepid SoL’ers come to the rescue yet again, bringin’ the funny with a delirious running commentary. This disc includes the 1944 short film X Marks The Spot. Bonus features include a new documentary featurette, The Incredible Mr. Lippert, and the original theatrical trailer.
It says something about a movie when the best thing about it is a mustache, as is the case with The Castle Of Fu Manchu. Christopher Lee takes climate change into his own hands in this 1969 installment of the Fu Manchu franchise. Determined to freeze the global water supply, the diabolical Fu Manchu heads to Istanbul for a castle, an opium reserve and a heart-to-heart with an ailing scientist. Fear not: his archnemesis, the Interpol superstar Nayland Smith, is on the job. An alternate title for this movie is The Torture Chamber Of Fu Manchu and, judging by the convoluted plotting, it’s by far the more accurate one. As Dr. Forrester says, “This movie makes The Unearthly seem like Citizen Kane.” It’s a good thing Orson Welles wasn’t around to hear that. Bonus features include a new Introduction by Frank Conniff, behind the scenes of the video game Darkstar featuring many MST cast members, and the original theatrical trailer.
Counterintelligence takes on a new meaning in the barely coherent tale of Hawaiian espionage that takes place on movie sets meant to look like Hawaii in Code Name: Diamond Head. If only superspy “Diamond Head” had infiltrated some of his own script meetings before this deadly pilot from legendary TV producer Quinn Martin was released on an unsuspecting public. Fortunately for us, Mike, Crow and Tom manage to sneak some really funny wisecracks into the script, not only neutralizing its odor but actually converting the 1977 TV movie into a work of art. This episode includes the short film A Day At The Fair. Bonus features include Code Name: Quinn Martin and the first installment of Life After MST3K, where we spotlight a cast member and the work he or she has done since leaving the show.
The last, but not least, stop on this Satellite of Love ride is Last Of The Wild Horses, though a second helping from Producer Robert L. Lippert is probably more than most can keep down. In this 1948 Western, “Duke” (no, not “The Duke” — you should be so lucky) is a robber-turned-rancher who gets in the middle of a ranch foreman’s scheme to steal wild horses and is framed for murder in the bargain. Those B’hoys on the Satellite of Love cut dirt on the riffing until the movie is catawamptiously chawed up, but the real treasure lies in this episode’s host segments, featuring an utterly unforgettable parody of Star Trek’s celebrated “Mirror Mirror” episode. Vintage MST3K Promos are offered as bonus features.
Bonus Features Include:
Total Program Running Time: +/- 8 Hours

Shout! Factory is a diversified entertainment company devoted to producing, uncovering and revitalizing the very best of pop culture. Founders Richard Foos, Bob Emmer and Garson Foos have spent their careers sharing their music, television and film faves with discerning consumers the world over.  Shout! Factory’s DVD offerings serve up classic, contemporary and cult TV series, riveting sports programs, live music, animation and documentaries in lavish packages crammed with extras. The company’s audio catalogue boasts GRAMMY®-nominated boxed sets, new releases from storied artists, lovingly assembled album reissues and indispensable “best of” compilations. These riches are the result of a creative acquisitions mandate that has established the company as a hotbed of cultural preservation and commercial reinvention.  With its fingers on the pulse of pop culture, Shout! Factory continues to impact the entertainment media landscape through acquisition of top quality programming for home entertainment releases. Shout! Factory is based in Santa Monica, California. For more on Shout! Factory, visit www.shoutfactory.com