For one week (December 5th to the 10th), Metallica became the house band for their own 30th anniversary celebration parties at San Francisco’s great Fillmore concert venue and I was lucky enough to have seen all four shows.
After being introduced to Metallica and their music by a friend, I have remained a hardcore fan for decades.

Few bands have withstood the test of time and remained at the top of their genre as Metallica has.

Whether you like the idea of a metal band writing ballads, recording/performing with a full symphony orchestra, recording a garage style album full of raw emotion and rage, or collaborating with Lou Reed, nobody can deny that they are a band that continues to push themselves and experiment with their sound thirty years into their career.

What better way to celebrate their anniversary here at Toy Chestburster, than with a flashback review of McFarlane Toys’ James Hetfield figure? 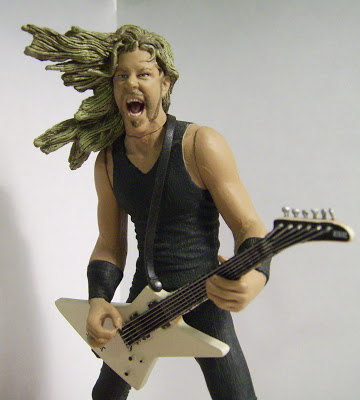 In 2001, McFarlane Toys released a series of Metallica figures from the “…And Justice For All” era.

The series consisted of all four members of the band, which you could purchase on individual blister cards or as a group in the Harvesters of Sorrow box set, which also included the stage with working lights and sound.

The card packaging proudly displays the figure and its accessories.  The band logo (from the Load era) is above the figure.  Doris, the iconic Justice statue from the “…And Justice For All” album cover is featured on the card itself, behind the figure.

If McFarlane were to make these figures today, you would likely have seen a clamshell packaging with this line.  As I mentioned in my previous Admiral Ackbar review, the blister cards are much susceptible to damage than the clamshells. 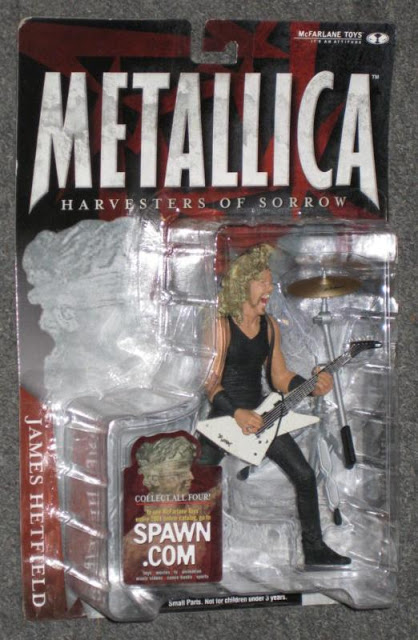 My highest praise for this figure falls in the sculpting category.

Not only is this my favorite sculpt of the line, it’s one of my favorite McFarlane figures to this day.  There is no mistake this is the mighty Het.  Hetfield is captured in his signature pose, seemingly screaming out lyrics wherever you place him.  Speaking of that scream, the detail on the interior of the mouth is truly great.  You can see what seems like all of his teeth.

The figure is also holding a non-removable guitar pick in his strumming hand. 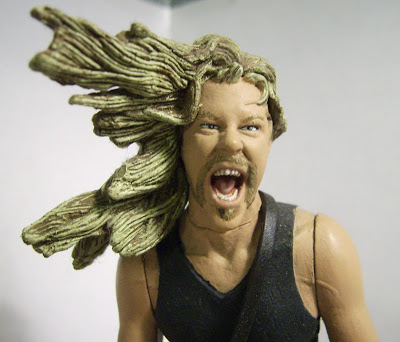 There is articulation in the hips forearms, neck and shoulders but because of the nature of the pose it really doesn’t apply. 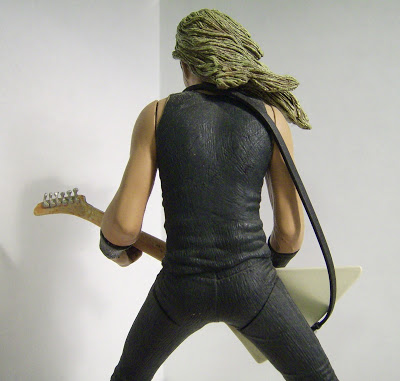 The paint jobs are excellent. I have no issues with slop or discoloring (even after ten years) with this figure.    There is not much in the way of accessories and with a figure like this, he truly only needs one item.  James comes with his iconic white explorer guitar, which fits perfectly in his grasp.

The guitar looks incredible and even has Hetfield’s hand written “SO WHAT” on the body.

The only inconsistency I noticed (and it wasn’t until this review) is the guitar has the ESP logo on it and not the Gibson logo.  James’ white ESP explorers from this era had the words ‘EET FUK’ or ‘MORE BEER’ written on them, depending on which explorer he was using.  If you purchased the blister-carded version, James also came with a cymbal for Lars’ drum kit (all the single carded figures each came with different drum pieces to complete Ulrich’s drum kit). 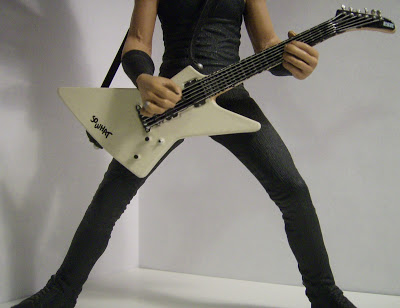 This figure has been out of production for a decade now, so it may be a little tricky to track down.
Your best bet is ebay.   I have recently seen an unopened blister card version going for $24.99 (they usually go for much higher) and an opened version for $15.99.  This remains one of my personal favorite figures after all these years, and I can’t recommend it enough.

Here’s to another thirty years of Metallica!  That’s all for this review!  Happy holidays, everyone! 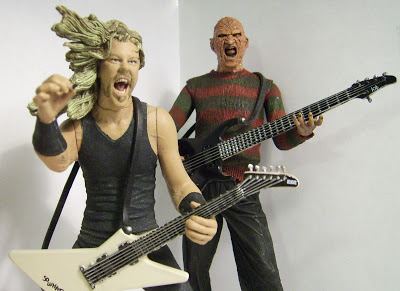 In this article:Music, Toy Review, Written by Ryan Murray