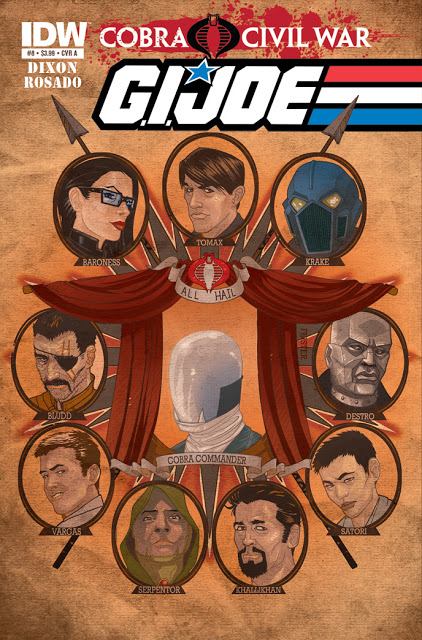 Since then, there have been a number of not-so-nice folks vying for the position, killing a number of Joes in the process.

Now, a successor has been named.

Full press release after the jump, and spoiled revelation at USA Today.

COBRA will never be the same.

San Diego, CA (December 7, 2011) – IDW Publishing’s COBRA CIVIL WAR end today when the new COBRA COMMANDER is crowned in G.I. JOE: #8, and the stunning aftermath will infect all three intertwined G.I. JOE series—G.I. JOE, COBRA, and SNAKE EYES. This December and under license from Hasbro, IDW’s G.I. JOE universe will never be the same, and each issue reveals a piece of this brand-new direction.

The action and aftermath continue on December 14th in SNAKE EYES #8, written by Dixon with art by Casey Maloney (Star Trek, Children of the Grave), as the ninja commando attempts to rescue his teammate, DUKE, who’s been infected by a lethal virus that’s diving him violently mad. If SNAKE EYES cannot save him in time, DUKE could be the last casualty of the COBRA CIVIL WAR.

In COBRA #8, available on December 21st from writer Mike Costa (Blackhawks, Smoke & Mirrors) and artists Antonio Fuso (Wolverine: Origins, G.I. Joe: Hearts and Minds) and Werther dell’Edera (X-Force, Punisher), the reign of the new COBRA COMMANDER begins—leading to January’s status-quo shattering COBRA COMMAND crossover series. An unstoppable series of events is set in motion, the world is about to learn what COBRA already knows: this is a very different kind of COBRA COMMANDER.

Also available on December 7th, G.I. JOE: COBRA: COBRA CIVIL WAR, VOL. 1 takes fans back to the beginning of the COBRA CIVIL WAR, with the first four issues of the COBRA series plus the 10-page prologue from G.I. JOE #0, including origins of the Cobra candidates who aspired to be the next COBRA COMMANDER. Readers can relive the early battles of this unprecedented war.

“Mike Costa has delivered readers with what could well be one of the best BARONESS stories to ever show up in a comic.” – TheTerrordrome.com

About IDW Publishing
IDW is an award-winning publisher of comic books, graphic novels and trade paperbacks, based in San Diego, California. Renowned for its diverse catalog of licensed and independent titles, IDW publishes some of the most successful and popular titles in the industry, including: Hasbro’s The TRANSFORMERS and G.I. JOE, Paramount’s Star Trek; HBO’s True Blood; the BBC’s DOCTOR WHO; Toho’s Godzilla; and comics and trade collections based on novels by worldwide bestselling author, James Patterson. IDW is also home to the Library of American Comics imprint, which publishes classic comic reprints; Yoe! Books, a partnership with Yoe! Studio.

About Hasbro, Inc.
Hasbro (NASDAQ: HAS) is a branded play company providing children and families around the world with a wide-range of immersive entertainment offerings based on the Company’s world class brand portfolio. From toys and games, to television programming, motion pictures, video games and a comprehensive licensing program, Hasbro strives to delight its customers through the strategic leveraging of well-known and beloved brands such as TRANSFORMERS, LITTLEST PET SHOP, NERF, PLAYSKOOL, MY LITTLE PONY, G.I. JOE, MAGIC: THE GATHERING and MONOPOLY. The Hub, Hasbro’s multi-platform joint venture with Discovery Communications (NASDAQ: DISCA, DISCB, DISCK) launched on October 10, 2010. The online home of The Hub is www.hubworld.com. The Hub logo and name are trademarks of Hub Television Networks, LLC. All rights reserved.  Come see how we inspire play through our brands at https://www.hasbro.com. © 2011 Hasbro, Inc. All Rights Reserved.