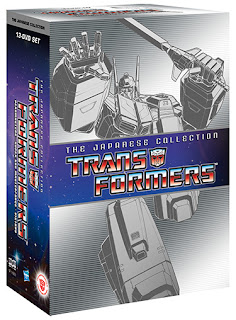 The Wait is Over! Fans Can Pre-Order Now to
Own This Entire Collection on DVD!

Early happy New Year 2012! Fans and collectors can finally bring home TRANSFORMERS: THE JAPANESE COLLECTION DVD box set from Shout! Factory, in collaboration with Hasbro. This is the rare Japanese trilogy that followed the popular “Generation 1” animated series. Available for the first time in North America, this 13-DVD box set is fully loaded with over 42 hours of entertainment, including all episodes that originally aired from the three Japanese series — Headmasters, Super-God Masterforce and Victory — each with their original Japanese audio tracks, English subtitles, and an art gallery. TRANSFORMERS: THE JAPANESE COLLECTION DVD box set finally available exclusively at Shout! Factory’s official online store ShoutFactoryStore.com and shipping to customers beginning January 2, 2012. Pre-order begins now!
Synopsis
TRANSFORMERS: THE JAPANESE COLLECTION – Headmasters
Optimus Prime lives again, the energy of the Matrix has been released and peace reigns on Cybertron . . . but all that is about to change with the startling arrival of the newest breed of Transformers warriors
TRANSFORMERS: THE JAPANESE COLLECTION – Super-God Masterforce
Following their victory over the DESTRONS (a/k/a DECEPTICONS) at the end of Headmasters, the CYBERTRONS (AUTOBOTS) depart Earth, leaving behind only a small group to protect the planet from any future menace. But when the powerful DESTRONS return to an unsuspecting planet, the CYBERTRONS must come out of hiding to defend their human friends once again — only this time they’ll be unable to do it on their own!
TRANSFORMERS: THE JAPANESE COLLECTION – Victory
Victory is the third and final installment of this Japanese trilogy— introduces four new factions to the TRANSFORMERS universe. Each group comes equipped with its own unique power and the ability to combine to form much larger, more powerful TRANSFORMERS, making each and every battle even more epic!
About Hasbro
Hasbro, Inc. (NASDAQ: HAS) is a branded play company providing children and families around the world with a wide range of immersive entertainment offerings based on the Company’s world-class brand portfolio. From toys and games, to television programming, motion pictures, video games and a comprehensive licensing program, Hasbro strives to delight its customers through the strategic leveraging of well-known and beloved brands such as THE TRANSFORMERS, LITTLEST PET SHOP, NERF, PLAYSKOOL, MY LITTLE PONY, G.I. JOE, MAGIC: THE GATHERING and MONOPOLY. The Hub, Hasbro’s multiplatform joint venture with Discovery Communications (NASDAQ: DISCA, DISCB, DISCK) launched on October 10, 2010. The online home of The Hub is www.hubworld.com. The Hub logo and name are trademarks of Hub Television Networks, LLC. All rights reserved.
Come see how we inspire play through our brands at https://www.hasbro.com. © 2011 Hasbro, Inc. All Rights Reserved.

ABOUT SHOUT! FACTORY
Shout! Factory is a diversified entertainment company devoted to producing, uncovering and revitalizing the very best of pop culture. Founders Richard Foos, Bob Emmer and Garson Foos have spent their careers sharing their music, television and film faves with discerning consumers the world over. Shout! Factory’s DVD offerings serve up classic, contemporary and cult TV series, riveting sports programs, live music, animation and documentaries in lavish packages crammed with extras. The company’s audio catalogue boasts GRAMMY®-nominated box sets, new releases from storied artists, lovingly assembled album reissues and indispensable “best of” compilations. These riches are the result of a creative acquisitions mandate that has established the company as a hotbed of cultural preservation and commercial reinvention. Shout! Factory is based in Santa Monica, California. For more on Shout! Factory, visit shoutfactory.com.