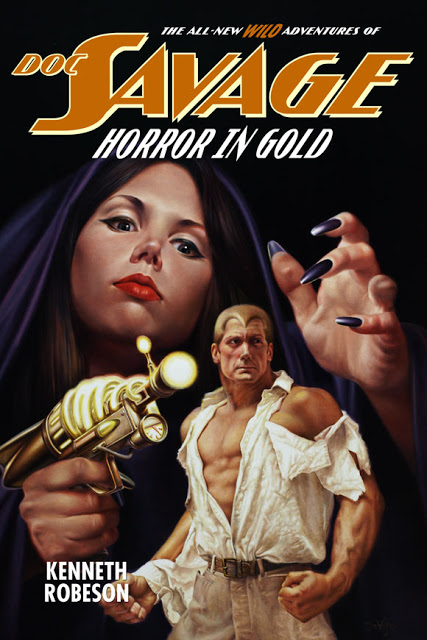 The Man of Bronze returns!

Or more accurately Kenneth Robeson returns to write a new Doc Savage adventure!  This time, pulp writer and historian Will Murray is the architect behind Altus Press’ latest, Horror in Gold, assuming the Robeson pseudonym.

As for the plot?

It began with an uncanny encounter on busy Seventh Avenue. Two men pass each other in the street, walking along calmly one minute—struck down the next by a horrific fate.

All over Manhattan, soundless detonations cut down prince and pauper alike. No one is safe. Great buildings are reduced to ruin. Banks are demolished. The authorities stand helpless.

Only one man, Doc Savage—scientist, adventurer and superman—can penetrate the eerie enigma that threatens to bring the mightiest city on earth to its knees. But when The Alchemist decrees that the Man of Bronze must surrender unconditionally to save New York, will Doc be snuffed out next?

From the besieged canyons of New York to the rugged coast of Alaska, Doc Savage and his men race to resolve the riddle that brings grisly doom to ordinary citizens—and threatens the economic recovery of a Depression-besieged world.

Following up on last summer’s successful first book in its Wild Adventures of Doc Savage series, Altus Press is excited to offer Horror in Gold. Set in 1936 Manhattan, Horror in Gold opens with an inexplicable wave of human detonations that brings legendary scientist-adventurer Doc Savage into the investigation to confront a strange new type of terrorism.

Written by prolific pulp writer Will Murray, who has won acclaim for his unequalled ten-year tenure ghostwriting Warren Murphy and Richard Sapir’s Destroyer action-adventure series, The Wild Adventures of Doc Savage is a continuation of the well-received Doc novels Murray wrote for Bantam Books back in the 1990s, along with the late Lester Dent. These new posthumous collaborations will be published under the pen name of Kenneth Robeson. Over a period of 30 years, the Doc Savage series sold over 20 million copies for Bantam Books.

“Horror in Gold is CSI-style Doc Savage story,” says Murray. “Most of the action takes place in and around Doc’s skyscraper headquarters, which we seen in more detail than ever before. With ordinary Gothamites falling victim to the most grisly murder method ever recorded, Doc spends a lot of time in the city morgue and in his super-scientific laboratory assembling the pieces of the puzzle. In between, the action never stops, as Doc and his men race to prevent an escalating tragedy—culminating in an explosive climax around a dormant Alaskan volcano which shouldn’t be rumbling to life, but is!

“This story is based on an unused Doc Savage plot Lester Dent wrote in 1935, but was considered too visceral to be published in the pages of Doc Savage Magazine back then. To live up to its potential, I wrote the most jaw-dropping opening chapter of my 50-novel career. I introduce one of the most vicious supercriminals in pulp history, The Alchemist, and a half-forgotten members of the original Doc Savage cast returns after an absence of almost 80 years.”

The first release in this series, The Desert Demons, had an Amazon ranking of #9,768.

Horror in Gold will be released in multiple formats:

The Wild Adventures of Doc Savage is being published in tandem with Radioarchives.com’s audiobooks of Will Murray’s original Bantam Books Doc Savage novels of the 1990s. Three have been released so far, most recently The Jade Ogre.