A season of warmth and gentleness in the midst of an otherwise cold and dreary winter.

A time to celebrate family, remember the past year, and look forward to the blessings of the coming year.

And a time to sing beloved songs that, quite honestly, have more than their share of “WTF” moments.

Jingle Bells
Overall, a relatively harmless celebration of Victorian-era winter fun… at least until we get to the second verse, which reads: “The horse was lean and lank / misfortune seemed his lot / we got into a drifted bank / and then we got upsot.”

Translation: the horse was powerful and uncontrollable, sending the sleigh crashing into a snowbank.  Yeah…  if there’s anything that says “Christmas” to me, it’s a traffic accident.

Santa Claus Is Coming to Town
“He sees you when you’re sleeping / he’s knows when you’re awake.”  Santa does it, and he’s beloved by millions.

Somebody else does it, and it usually results in a trip in a nice car with festive red and blue lights atop, to a cheerful building where one’s picture is taken, and then one is placed with a bunch of similarly cheerful revelers. 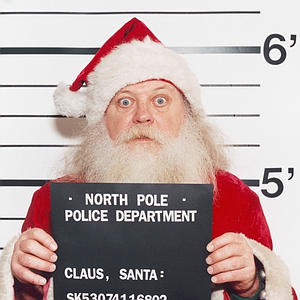 Baby It’s Cold Outside
Yes, it’s a Holiday Season standard, but just listen to the lyrics.

A rather lecherous man attempts to get his lady friend to stick around and get hammered.  Even includes a line that strongly implies that one of her drinks has been doctored, or at least spiked.

Grandma Got Run Over by a Reindeer
Blatant novelty song.  Free pass. 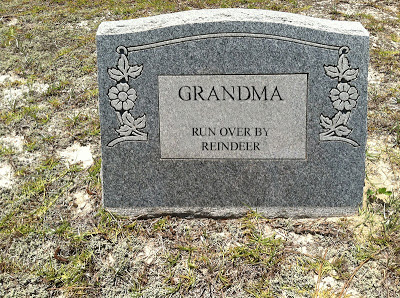 Rudolph the Red Nosed Reindeer
Hmmm….  Santa is able to get reindeer to fly, pulling a sleigh at speed that would make Chuck Yeager drool, and yet somehow he’s stymied by a little fog?????  If only there was some way to attach a light source to a vehicle.

Deck the Halls
Not so much an “WTF” moment, but more of a language shift.  Let’s just say that “don we now our gay apparel” has changed meaning in the past century or so.

Santa Baby
Is this lady trying to seduce Kris Kringle?  Is she that starved for a date that she’s trying to become the next Mrs. Claus???

Dominic the Donkey
See “Grandma Got Run Over by a Reindeer”

We Wish You a Merry Christmas
The first verse is fairly innocuous…  just a wish of Season’s Greetings, really.

Yet the 2nd and 3rd verses create the “WTF” moment.  The second states “So bring us a figgy pudding,” while the third one states “We won’t go until we get some.”

In the space of three verses, we’ve gone from greetings of the season, to demands for food, to a bunch of singers who won’t leave until they get fed.

Blue Christmas
On the surface, it’s just a song about missing a loved one.

Yet, look a little deeper.

“You’ll be doin alright, with your Christmas of white.  But I’ll have a blue, blue blue blue Christmas.”  In other words… the loved one is having a merry old time, perfectly happy without the singer, while the singer wallows in mire.  Sounds like a rather unhealthy obsession to me.

Hope you have enjoyed this little examination of the surprising aspects of famous Christmas/Holiday songs.

May this Season, however you celebrate it, be filled with laughter, love, and oh yes, song.