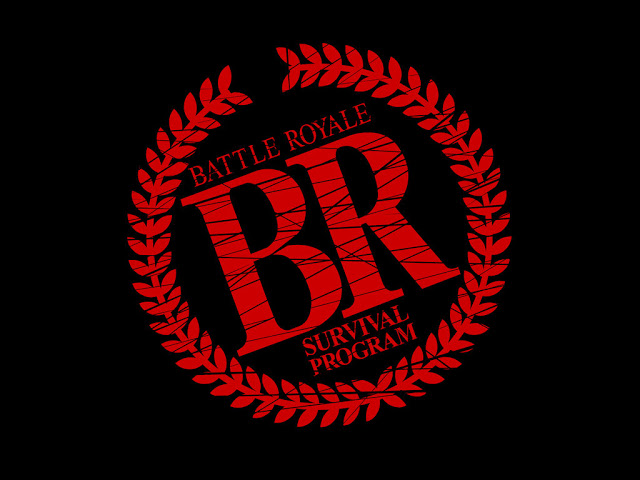 Almost a decade before The Hunger Games was released, the film adaptation of Koushun Takami’s novel Battle Royale depicted schoolchildren who are forced to fight each other to the death.

Now, finally, over a decade after it’s release, Battle Royale is legally coming to DVD and Blu-ray for it’s first North American release.

“If you love The Hunger
Games, BATTLE ROYALE sets the stage.
One of the best – and most violent – genre films ever made.  It’s also a hell of a lot of
fun.”
–
Chris Nashawaty, Entertainment
Weekly
“BATTLE ROYALE is not just
a fantastic film, but an important work on a precipice of the most dangerous
period facing cinema in the last 40 years.”
–
Harry Knowles, Ain’t It Cool
News
ONE OF THE
MOST CONTROVERSIAL FILMS IN HISTORY FINALLY ARRIVES!
BATTLE ROYALE
Available for the first
time in North America on Blu-ray™, DVD and digital download on March
20th from Anchor Bay Entertainment
Beverly Hills, CA – Battle Royale.  A title that has shocked,
thrilled and unnerved audiences.  A
film whose fiendishly simple premise has inspired many imitations, including the
upcoming The Hunger Games motion
picture. Based on the 1999 global best-seller by Koushun Takami, the futuristic
tale first came to the screen in 2000, directed by the legendary Kinju Fukasaku.
Authors, filmmakers and film fans the world over consider the film and its 2003
sequel Battle Royale II: Requiem sacred
cinematic classics.  And now, fans
can own them on high-definition Blu-ray™ and DVD!
On March 20th, Anchor Bay Entertainment proudly brings
the Battle Royale: The Complete
Collection to Blu-ray™ and DVD for the first time in North America.
Featuring state-of-the-art HD transfers, hi-res audio and a wealth of bonus
features that delve deep into this truly international phenomenon – the three
disc Blu-ray™ plus bonus DVD set has an SRP of $49.99 and an SRP $44.98 for the
four disc DVD.  Battle Royale will also be released
separately on Blu-ray™ for an SRP of $29.99 and DVD for an SRP of $24.98.  Pre-Book on both is February 22.  Battle Royale will be available
digitally via select outlets including iTunes® and Xbox
LIVE®.
42 students, Three days, One survivor – No Escape.  Welcome to the world of Battle
Royale!
Battle
Royale 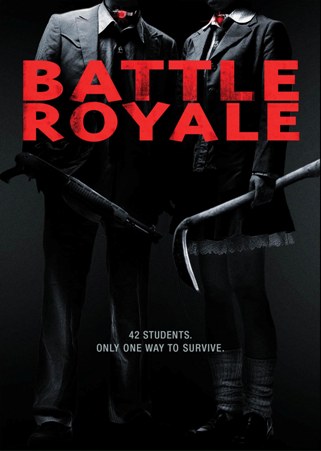 In the near future, the economy has collapsed,
unemployment has soared and juvenile crime has exploded. Fearful of their
nation’s youth, the Japanese government passes The BR Law:  Each year, a 9th grade class
is sent to a remote island where they will be locked into exploding neck
collars, given a random weapon, and forced to hunt and kill each other until
there is only one survivor left. Chiaki Kuriyama (Kill Bill) and screen legend Takeshi
Kitano (Boiling Point, Brother) star
in the movie that has been argued, acclaimed and banned around the world. More
than a decade later, it remains one of the most savage, shocking and emotionally
powerful films of all time. Now experience the complete Director’s Cut of Kinji
Fukasaku’s uncompromising masterpiece – nominated for 10 Japanese Academy
Awards® – available uncensored and unrated for the first time ever in
America. 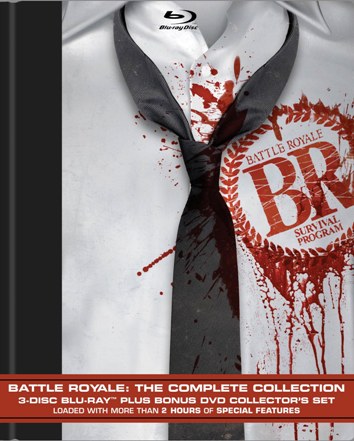 In 2000, director Kinji Fukasaku unleashed Battle Royale, his violently poetic epic
about an innocent group of Junior High students forced by the government to hunt
and kill their classmates for sport. It was nominated for 10 Japanese Academy
Awards®, launched a global phenomenon, and banned from screens by
frightened civic groups and distributors across America. Three years later, the
equally disturbing sequel – featuring a new class, new rules, and a brutal
terrorist plot by the first film’s young survivors – triggered its own tragic
firestorm around the world. Now for the first time ever, you can see it all:
Experience the entire Battle Royale
saga on 4 discs that forever blasts open one of the most potent, shocking and
savagely influential sagas in motion picture history.
Battle Royale: The Complete
Collection’s four disc set in collectible high-end packaging
will include:
·
Battle Royale Director’s Cut with both
Japanese and English language tracks and English subtitles
·
Battle Royale Theatrical Cut with both
Japanese and English language tracks and English subtitles
·
Battle Royale II with Japanese language
and English subtitles
·
Battle Royale Bonus Content with
Japanese language and English subtitles
SPECIAL FEATURES:
·
The Making Of BATTLE
ROYALE
·
BATTLE ROYALE Press
Conference
·
Instructional Video: Birthday
Version
·
Audition & Rehearsal
Footage
·
Special Effects Comparison
Featurette
·
Tokyo International Film
Festival 2000
·
Battle Royale
Documentary
·
Basketball Scene
Rehearsals
·
Behind-The-Scenes
Featurette
·
Filming
On-Set
·
Original Theatrical
Trailer
·
Special Edition TV
Spot
·
TV Spot: Tarantino
Version
The Battle Royale release will
include:
·
Director’s Cut with Japanese
and English language and English subtitles
With impeccable direction by three-time ‘Director of the
year’ Kinji Fukasaku, and featuring high-quality acting performances from every
angle, Battle Royale: The Complete Collection
is as cunning as it is ruthless, offering a unique and brutal depiction
of what people are capable of when imminent death is everywhere you
look.
About
Anchor Bay Entertainment:
Anchor Bay
Entertainment is the home entertainment division of Starz Media, LLC. It
includes the Anchor Bay Films and Manga Entertainment brands. It distributes
feature films, children’s entertainment, fitness, TV series, documentaries,
anime and other filmed entertainment on Blu-ray™ and DVD formats. Headquartered
in Beverly Hills, CA, Anchor Bay Entertainment has offices in Troy, MI, as well
as Canada, the United Kingdom and Australia. Starz Media (www.starzmedia.com) is an
operating unit of Starz, LLC, a wholly-owned subsidiary of Liberty Media
Corporation (NASDAQ: LMCA).