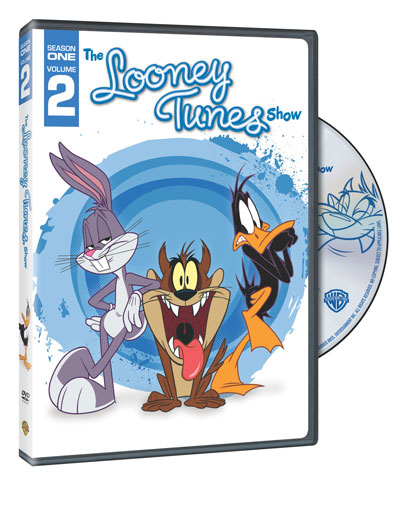 The Pitch
This half-hour animated comedy series starring Bugs Bunny and Daffy Duck is no longer confined to 7-minute shorts. Bugs and Daffy are out of the woods and living in the suburbs among such colorful neighbors as Yosemite Sam, Granny, Tweety and Sylvester. In addition to each episode’s main story, The Looney Tunes Show also features “cartoons within a cartoon.” The Tasmanian Devil, Speedy Gonzales, Marvin the Martian and other classic characters sing original songs in two-minute music videos called Merrie Melodies . The legendary Looney Tunes cartoons are getting a 21st century relaunch and a CGI overhaul for a new generation.

The Review
Criminally brief with only four episodes (Come on, Warner, full season releases please!), The Looney Tunes Show: Season One, Volume 2 was an interesting viewing experience.  I reviewed the first volume a few months back, giving it a fairly negative review.  But this time, I’m recommending it.

When I saw the recent film, I walked out of the theater examining my complicated feelings toward both the film and the property and when I watched this volume I couldn’t help but compare the two pieces of work.  Both cases do what they are trying to accomplish, which is reinvigorate the characters for new, younger audiences.  In that respect, it’s a success.  The Looney Tunes Show: Season One, Volume 2 is a modern introduction/interpretation of beloved characters and does succeed in presenting them to a new audience without disrespecting their legacy.

Included on the disc are four episodes:

Also included in each episode is a musical Merrie Melodies short and a CG-animated Road Runner and Wile E. Coyote short.

The Looney Tunes Show: Season One, Volume 2 might not satisfy die-hard purists, but for those new to the characters or longtime fans, it’s recommended.