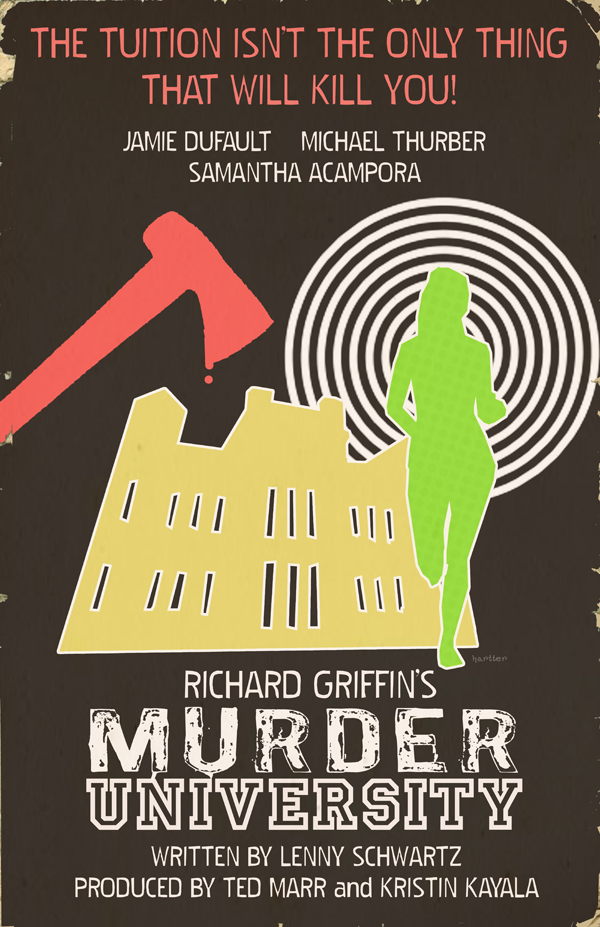 The project is looking to raise film for the complete budge (pre-production, production and post-production) of $10,000.00. The budget will go towards locations, costumes (The movie is set in 1983), special make-up effects, props, lighting and sound rental, cast and crew salaries, transportation fees and … one of the most important things… craft services! Feeding twenty to thirty people three times a day really adds up!

Keep in mind that $10,000.00 the cost of producing this entire film is likely less than a small portion of the craft service expense of a studio film, and for voracious lovers of the horror genre, a donation of a mere ten dollars gets your name in the end credits!

After the jump, check out the video made to support the project, as well as more information regarding the film.

Be sure to check out the Murder University IndieGoGo page and Official Facebook page.

In a rare collaboration, playwright Leonard Schwartz, of Daydream Theatre Company, and filmmaker Richard Griffin, of Scorpio Film Releasing, will collaborate to create an exciting new feature film that will premiere in late Summer 2012. Writer Schwartz and Director Griffin both create works that are highly imaginative and often anarchistic. Both were looking for a project that would give them a new creative experience, yet make use of a shared passion for their craft and interests. The project will be cast, filmed and edited completely in Rhode Island. Principal photography will begin on January 21st.

“We agreed to do this because of our shared, prolific, work ethic,” Griffin states. “And our shared, warped sense of humor,” jokes Schwartz. Both men share an impressive and passionate knowledge of film genres and film history. “This film,” Griffin adds, “promises to be pure entertainment. The script is filled with scares, gore, laughs, some great characters are a very surprising twist on the slasher film sub-genre. Plus, the cast we’ve assembled is simply the best. I think that Murder University is really going to entertain horror fans who are sick to death of CGI gore, remakes, and sequels. This one is fresh blood, straight from the vein!”

The plot of Murder University revolves around a series of brutal, cult-like murders taking place at a small New England college. Josh Greene (Jamie Dufault), a shy freshman, is the lone survivor of a series of murders that are reminiscent of a similar string of killings some twenty years prior. As he seeks to uncover the secret behind the attacks, he is joined by Detective Forrester (Michael Thurber), who was instrumental in halting the bloodshed before, and his daughter Meg (Samantha Acampora) who had barely escaped being a victim previously.

Schwartz is an award-winning playwright who writes and produces two full-length original plays each year in Rhode Island at the Bell Street Chapel in Providence. In addition, several of his original short plays have been produced and competed in Festivals in New York City since 2008. Schwartz’s summer 2011 play, “Fidelity”, had a full production in NYC in June at the Planet Connections Theatre Festivity. It was nominated for Best Playwriting, Best Supporting Actor, Best Supporting Actress and Best Use of Recycled Materials for Set. The PCTF focuses heavily on “green” initiatives. Schwartz’s play, “The Scarecrow” is being re-produced locally in August by the Young Actors Ensemble, directed by Rob Roy.

Griffin’s feature films have won many awards and received glowing reviews with each new premiere. Often in the science fiction and horror genre, his films have received national as well as international distribution. In 2010, Scorpio Film Releasing’s short film entry into the Providence 48-Hour Film Project, “Mutants of the Apocalypse”, received a record five film awards. One of Griffin’s most popular recent feature films, “Nun of That”, starring Sara Nicklin and Michael Reed, was picked up by numerous distribution outlets including On-Demand and Pay-Per-View nationwide.