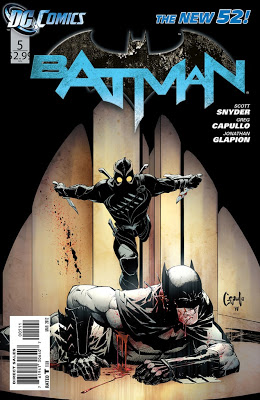 One of the great things about being a comic book fan is the moment you find the perfect book that completely captivates your attention from beginning to end.

Comic book nirvana has arrived as Scott Snyder puts Batman through the ringer in a story that has the Dark Knight battling his own sanity. Bats has been trapped in a dark labyrinth by the Court of Owls for eight days without food, water or rest. He hasn’t bathed or shaved, his costume is torn up and the white left eye piece is missing from his mask.

The missing eye piece is excellent because we see Batman’s true emotions as he is in unspeakable peril. Over the years I always wondered if a punch or kick hurt more than he let on or how horrified he was, if at all, when he examined a crime scene.  At one point the lights inside the labyrinth are turned on and a stylish Owl shaped water fountain is revealed. Knowing it’s drugged, Batman drinks the water without hesitation. The mind games begin to take shape as secrets are revealed and the horror is unleashed.

As you read the book, you get to a page layout where you have to turn the book left side up to make sense of it all. When you turn from that layout, the next page is upside down which looks like a mistake. You naturally turn it right side up to examine the page thinking you are correctly holding the book again. As you continue to read, it takes you a minute to realize that you’re reading the previous pages over again, thus, experiencing and sharing the mental madness Batman is going through. The ingenuity of it all was simple and brilliant. The art work is in sync with the story almost more than any other comic book I have read in quite sometime. Even this early in the year, Snyder’s number 5 has all the makings to be the single best issue of the year. 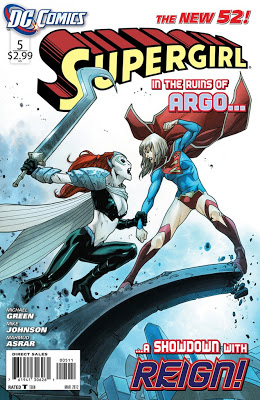 After last month’s dreadful issue, Green and Johnson get back on track with a Supergirl story that answers some questions and presents some new ones.

Kara flies from Earth to Argo City to be reunited with her family even though Superman warned her of Krypton’s demise. She expects a homecoming and finds a grave yard. As expected, she is sad to discover the truth that Krypton is gone. The story is predictable since we knew what she was going to find and react. Green and Johnson did a great job of keeping it interesting despite previous knowledge on the readers part.

Kara uses the sunstone crystal to activate a holo message left by her father, Zor-El. He explains what happened and how he tried to save Argo City and all of a sudden he is brutally murdered and Kara watches on in sheer horror.

Superman never had to see his parents die but Kara will live with that image burned in her mind forever.

The artwork did a fantastic job of depicting Argo City as this cemetery lost in space and the color treatment was a little darker than previous issues which was perfect in this case because there is nothing vibrant or bright about Kara’s discovery. Oh yeah, a new enemy emerges which reveals one of Krypton’s past indiscretions Dan Slott let Mark Waid play with his toys last week and now it’s his turn to give a free a highly entertaining Spider-Man issue.

The story begins with Peter Parker waking up in an extra good mood on a beautiful New York morning and he decides to walk to work instead of web slinging. Along the way he is reminded about how much he loves the city. At work, he is paired with an annoying colleague to work on a super science project that reveals a future NYC, totally destroyed and only Spider-Man hold the key to the cities salvation. The story provided a fun pace and the artwork was chopped full of stunning visuals and vibrant colors that were absent in the last issue.

This was my pick of the week until I read Batman and that is not a slight at all. Overall, this book reeks of awesomeness and the ending guarantees your next appointment in February. 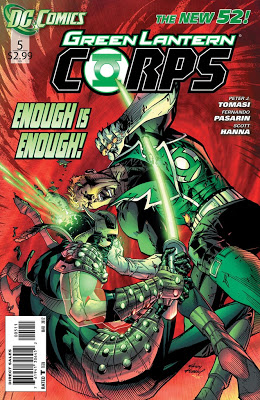 Guy Gardner is mad as hell and is looking to take out the Keepers once and for all and he is looking for the toughest son of bitches to help. Kilowog points him in the direction of a particular clique of beer drinking, card playing, cigar smoking, wise cracking, bad ass mofos called “Mean Machine” to help him in his endeavor.

Guy asks for their help and tells them that he is not interested in diplomacy, but wants to “Bring the Pain”. That gets their juices flowing and they accept.

Martian Manhunter appeared in the last issue and stuck around in this issue to reveal to Gardner and his squad the true origin of the Keepers which leaves them completely floored.

J’onn’s interactions with Guy was weird and cool at the same time because this is their first encounter and Guy doesn’t know if he can trust him.

Tomasi’s writing was fantastic through out the book and was topped off by a chilling statement from J’onn as he addressed the Corps saying “You failed Krypton, you failed my home world of Mars, DON’T fail Earth”. There is so much more that unfolds in this book but I’m not going to spoil it all. 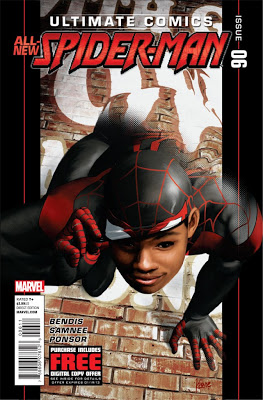 It’s Miles Morales’ first official day as the new Spider-Man and he is taking his job seriously even while having a few hick ups along the way.

The ultimate version of Scorpion makes his debut in this issue. Bendis does it again by producing a script that continues to make the reader emotionally invested in Miles. Ganke, Miles’s best friend, insists he needs to watch footage of Peter Parker in action to be a better superhero in a door bursting scene that is sure to put a smile on your face and captures the essence of what makes this series nearly just what the doctor ordered. Chris Samnee filled in for Sara Pichelli and her work was missed. That is not a slight on Samnee’s work at all because it was very good.

However the Bendis, Ponsor and Pichelli trio have this chemistry that is absolutely perfect for this character. I noticed the artwork popped a lot more when I read the free digital version that comes with the book on my IOS device.

This makes me wonder if this is why Samnee got the gig this month instead of Pichelli since Marvel is moving more towards the digital market.

Very fun issue all around and if you haven’t read this series yet, I suggest picking up the hardcover book containing the first five issues due to be out next month. Trust me, you won’t be disappointed. 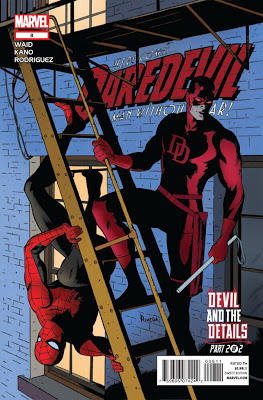 Mark Waid pens his second comic book of the month as Daredevil #8 picks up right where TASM #677 left off as Black Cat believes Spider-Man framed her for a robbery but cooler heads prevail after some deliberation reveals that someone is trying to play them against each other in order to steal a high tech projector.

Waid scripted some amusing dialog and one page layout in particular comes to mind when Black Cat aggressively question a suspect and he screams “I WANT A LAWYER” and Daredevil nonchalantly replies “Trust me, it wouldn’t help. You want to calm her down, TALK”.

The art and writing maintain its stylish noir that really sets itself apart from the other comics on the market. 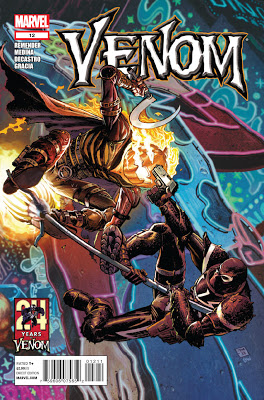 What happens in Vegas can’t stay in Vegas as Rick Remender brings the noise as the Venom symboite can no longer contain it’s rage and that means bad news for everyone else.

Jack O’Lantern is going toe to toe with an angry Venom while at the same time taunting with the reminder that his family will be murdered if he doesn’t complete the heist. Meanwhile, Red Hulk has been dispatched by Captain America to retrieve the symboite and he is closing his objective.

The script was entertaining and the artwork really hit its stride when Venom’s fury was at its apex and he is slamming, throwing, clawing, biting and just plain destroying everything in sight.

When this series first started I was skeptical if a black ops Venom would work. Well, the black ops stuff has been pretty cool and we get just enough of Venom we all know and love where we are itching to come back every month for more. 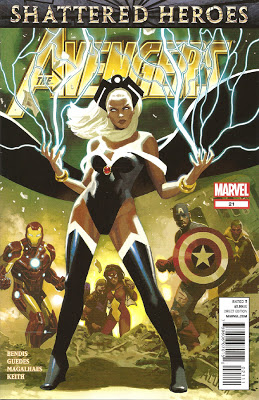 The Avengers split up into groups of two in order to take on Hydra and Hammer. Spider Woman and Hawkeye combat Hulks with Spider powers and she tries to trick them into believing that she is a double agent by ordering them to kill Clint. Epic fail on her part and the execution of Bendis.

Red Hulk and Storm are fairing any better and Captain America, Vision and Maria Hill….well, you get the point. The book was meh at best but in my opinion it was just plain boring. This is was the first time I have ever fell asleep while reading something.

There are a crap load of Avengers books but how many times can you release an issue where the team it taken out and pulls out the hail mary finish at the last minute.  After awhile, it starts to get boring and not worth $3.99 for a weak story. If you not convinced just look at the cover. This issue all month was hyped as Storm’s debut with the Avenger’s and she appears in only two pages and she is out cold in both of them. Trust me, don’t believe the hype.