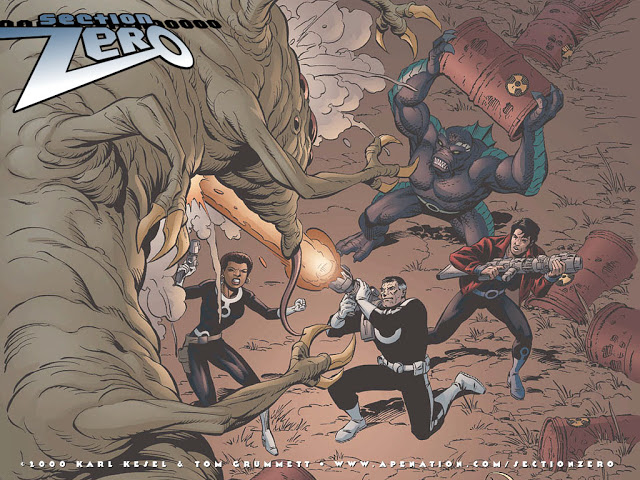 Over a decade ago (which in of itself is amazing), Section Zero was one of the premiere titles of the short lived Gorilla Comics line.  I was a huge fan of the far too short running series by Karl Kesel and Tom Grummett, as I felt that it represented the best qualities that the medium had to offer: imaginative plots, solid storytelling and an overall sense of fun.

Which made me more than pleasantly surprised when I received word from Mr. Kesel yesterday that the series is making it’s long overdue return.

“I never had more fun than when Tom and I were working on Section Zero,” Kesel states. Grummett agrees. “Section Zero had this energy and excitement, and a weird little garage-band kinda feel that just crackles off the page. I’d argue it’s the strongest stuff we ever did together.” Whenever either appeared at a con or store signing, they’d be asked “Are you ever going to finish Section Zero?” Both felt it was a matter of when, not if. “I always wanted to find some way to get back to Zero,” Kesel emphasizes, “but life kept getting in the way.”

And life often zigs when you think it will zag. “I remarried, and my wife and I decided to adopt a baby. Suddenly I became very aware of my legacy— of having something to leave behind for my kid— and for me that meant finding some way to do creator-owned comics again. The easiest way to do that nowadays is on the web.” Kesel launched www.madgeniuscomics.com on Halloween 2011 with “Johnny Zombie Christmas— a Heartwarming Tale of Yuletide Terror.” But he knew that story would end by Christmas. He wondered what to follow it up with, and instantly thought of Section Zero.

“There Is No Section Zero” was the comic’s original tag-line, and as far as Kesel is concerned “There is no Section Zero… without Karl and Tom.” Kesel contacted Grummett, who didn’t need to be asked twice. Kesel smiles, “We’ll be squeezing it in around our day jobs”— Kesel is currently inking Spider-Man Season One, and Grummett is penciling Avengers Academy— “but we will finally finish what we started.”

Kesel assures new readers “the web comic starts at the beginning. We launch with a 5-page Prologue on Monday, January 2nd, then we’ll post the first 3 issues of Section Zero, 3 pages every Thursday. Once that’s done, it’ll be all new material. And that gives us the time we need to make that new material!” Fans who have read the original comics will still want to check out the postings. “I’m tweaking the dialogue a bit here and there— partly to make it read better, partly because my idea of what the story’s about has changed slightly over the years. Plus, Richard Starkings at Comicraft— who is insane in the best possible way— insisted on ‘freshening” the lettering— so we’ve got a new font and new placements and the book has a slightly different look.”

Kesel points out: “if not for Richard, Tom and I may not be bringing back Section Zero right now. In my various moves I had lost track of the book’s original coloring and lettering files— which killed me, since Ben Dimagmaliw had done such an amazing job coloring it— but Saint Starkings dug through his archives and found copies of everything! Gotta say, Christmas came a little early for me when I heard that.”

What can readers expect in Section Zero? “Oh, prehistoric creatures that won’t stay extinct, albino alligators in the New York City sewers, the usual,” Kesel says. “I just wrote a pretty intense scene with a troll, and we’ve got something coming up set in the most chaotic, out-of-control place on earth— a kid’s daycare center! But the thing I’m most excited about is— well, when we started Section Zero I made a big deal that it took place in real time, that the characters aged. And I’m sticking to that. So after we post those first three issues there’ll be a solid black splash page with just the words ’12 Years Later…’ And I know it sounds strange, but that gap has only made our comic stronger and better. It made very clear to me what the story is really about.”

“Section Zero is about to step out into the unknown once again,” Grummett adds, “this time as a web comic. I’m expecting the same kind of steep learning curve I faced our first time out, but I’m looking forward to it. I’m also looking forward to playing with these characters again, and trying to field the curve-balls Karl will be pitching at me. We’ve thrown out the old maps… and we’re making new ones as we go.”