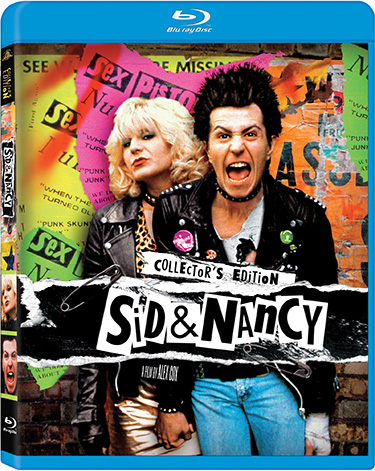 The Pitch
Gary Oldman (Harry Potter franchise, The Dark Knight) and Chloe Webb (The Newton Boys) “execute performances that are nothing short of phenomenal” (Los Angeles Times) as Sex Pistols bassist Sid Vicious and his unforgettable junkie girlfriend, two social misfits who literally love each other to death. In this “riveting biography of burnt-out icons” (The Washington Post), visionary writer/director Alex Cox (Repo Man) creates “a great film” (“Siskel & Ebert”) about the destructive lives of two 1970’s punk legends. Their love affair is one of pure devotion. Sid falls hard for groupie Nancy Spungen, who seduces him with her affection and addiction to heroin. Their inseparable bond to each other and their drugs eventually corrodes the band, sending Sid and Nancy down a dark road of despair. Out of money, hope and options, the despondent pair hit rock bottom while living in squalor at New York’s infamous Chelsea Hotel. But their journey takes yet another tragic turn as they face their final curtain and attempt to fulfill their destiny of going out in a blaze of glory!

The Review
Relationships don’t get more self destructive than punk rock’s very own Romeo & Juliet, Sid Vicious and Nancy Spungen.

Told in flashback, Sid & Nancy chronicles the downward spiral of the relationship between Sex Pistols frontman Sid, and his girlfriend and manager Nancy, who winds up stabbed to death.  Vicious is charged with the crime, but his addiction to heroin has him unsure if he did the crime.

Director Alex Cox depicts the punk movement as genuine, long before kids thought being a punk meant buying some safety pins and shopping at Hot Topic.  Both Gary Oldman as Sid and Chloe Webb as Nancy are mesmerizing to watch as they destroy themselves in a haze of substance abuse and emotional turmoil.  Whatever your feelings are about the music should not deter you from seeing this powerful, superbly acted tragedy.  Cinematography from Roger Deakins is impressive and the picture and audio quality on the Blu-ray is also excellent.

The only criticism is that the disc is labelled as a “Collector’s Edition” and only provides two featurettes and a trailer.  It would have been nice to have Cox, Oldman and Webb on a commentary track (it wouldn’t hurt to have Sex Pistols’ Johnny Rotten on their as well).  Sid & Nancy is a time capsule of the punk movement before it was a marketing term and a doomed love story and is highly recommended.