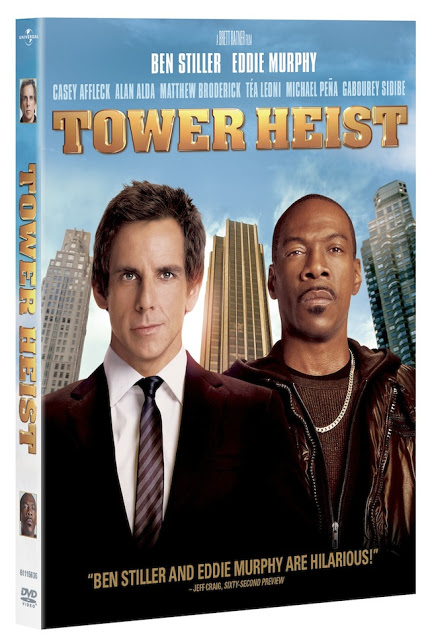 If nothing else, Tower Heist might be the film remembered for bringing Eddie Murphy back from the family film genre.

When the staff of New York City’s most expensive and luxurious condominium discovers that the billionaire investment advisor living in the penthouse has plundered their retirement fund, they take matters into their own hands in. Convinced that light-fingered Wall Street Titan Arthur Shaw (Alan Alda) has stashed his ill-gotten millions in his apartment, building manager Josh Kovacs (Ben Stiller) rallies his troops and enlists the help of small-time thief Slide (Eddie Murphy) to make sure they get back what’s rightfully theirs. These rookie thieves—including high-strung concierge Charlie (Casey Affleck), broke ex-Wall Streeter Mr. Fitzhugh (Matthew Broderick), new bellhop Dev’Reaux (Michael Peña) and feisty maid Odessa (Gabourey Sidibe)—know the building better than anyone. It turns out they’ve been casing the place for years…they just didn’t know it.

Ben Stiller & Eddie Murphy Lead an All-Star Cast in
the Year’s Most Hilarious Action-Comedy
TOWER HEIST
Own the Special Edition Blu-Ray™ Combo Pack That Includes
DVD, Digital Copy & UltraViolet™ & Features
Two Hilarious Alternate Endings & Exclusive Bonus Features February 21, 2012
“Tower Heist is so fun, it’s criminal!” – ASSOCIATED PRESS
“Hilarious, irresistible and extremely entertaining!” – Scott Mantz, ACCESS HOLLYWOOD
Universal City, Calif., January 3, 2012—A wealthy Wall Street swindler gets his just desserts at the hands of the employees he stiffed in the year’s most uproarious action comedy, Tower Heist, coming to Blu-ray™ Combo-Pack with UltraVioletTM, as well as DVD, Digital Download and On Demand February 21, 2012 from Universal Studios Home Entertainment.  Ben Stiller and Eddie Murphy lead an all-star comedy cast in this hilarious tale of sweet, sweet revenge. The film’s stellar ensemble cast includes Casey Affleck (Ocean’s Eleven trilogy), Alan Alda (The Aviator), Matthew Broderick (The Producers), Stephen McKinley Henderson (“Law and Order”),  Judd Hirsch (A Beautiful Mind) Téa Leoni (Fun with Dick and Jane), Michael Peña (Battle: Los Angeles) and Gabourey Sidibe (Precious).  The film is produced by Academy Award® winning-producer Brian Grazer (8 Mile, A Beautiful Mind, American Gangster).  The Tower Heist Blu-ray™ Combo Pack delivers the film in perfect hi-def picture and perfect hi-def sound and features over an hour of bonus features including two alternate endings, deleted scenes, a gag reel and exclusive behind-the-scenes features on the making of the film.
Included in the Blu-ray™ Combo Pack is an all-new UltraViolet™ copy of the film. UltraViolet™ is the revolutionary new way for consumers to collect movies and TV shows, put them in the cloud and stream instantly to computers, tablets and smart phones and soon, consumers can download to devices of their choice too.  The Tower Heist Combo Pack also includes a DVD and Digital Copy of the film which is compatible with iTunes®, iPad®, iPhone®, iPod™ touch, Android or other retail partners.  So now, consumers can truly enjoy their movies and TV shows anytime, anywhere, on the platform of their choice!  The Blu-ray™ also includes Universal’s Second Screen—a technology that enhances the viewing experience by allowing viewers to simultaneously control and interact with the film and bonus material on a WiFi-connected tablet or computer as the movie plays on the television screen.  The new Flick View Feature will allow fans to interact even more with the movie and be able to move content from their tablet to their TV screen.
BONUS FEATURES
Bonus features that appear on the both the Blu-ray™ and DVD versions include:
The following features are exclusive to Blu-ray™:
o   And with UNIVERSAL’S SECOND SCREEN, viewers can enjoy an innovative and interactive viewing experience, that allows them to control, interact and explore Tower Heist with groundbreaking new features right on a networked tablet or computer, in synchronization with the movie on the television screen! While the movie plays, experience features such as:
§  Flick View:  Interact with the movie; move content from the Tablet to the TV screen; and compare storyboards, animatics and other executing content by “Flicking” them from on their tablet to their TV screen, simply by gesturing their fingers upwards on their tablets.
§  Behind the Scenes w/Flick View:  Viewers get an all access look at the making of the film featuring interviews with cast and crew.
§  Storyboards w/Flick View:  Viewers will be able to take a closer look at the storyboards created for some of the amazing sequences in the film.
§  The Music of Tower Heist—Songs from the Tower Heist soundtrack are highlighted with the option to add to a playlist and purchase.