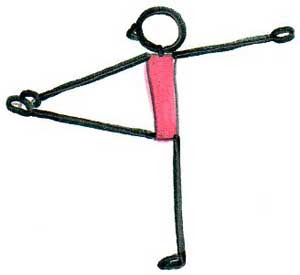 I have done Yoga maybe four times in my life and  quit due to the fact that all I ended up doing was farting my way through class (It’s hard to hold a pose at the same time you are holding in a squeaker).

Anyway, the following video shows a woman named Briohny Smyth doing Yoga in her underwear in what looks like a trillion dollar Manhattan apartment (which is so Namaste).

Now, normally I wouldn’t post something like this since it is not technically Geek-related but the video did get my husband, who was playing Uncharted 3 in 3-D for the last three days straight, to finally peel himself off the couch and watch it about five times before he excused himself to go into our bathroom for twenty minutes.

So, in a sense, watching Ms. Smyth push her butt cheeks into the viewers face is extremely interesting to Gamers.